The Easiest Languages to Learn for English Speakers. Whether you’re gearing up for a big trip or looking to stimulate your brain, attempting to learn a new language is always a noble endeavor. 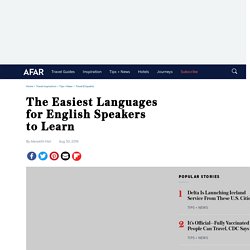 But that doesn’t mean it’s easy. We turned to Hannah McElgunn, a Canadian linguist based at the University of Chicago, for the inside scoop on everything English speakers should keep in mind when choosing an adopted tongue. “There are two ways that languages can be related to each other,” McElgunn explains. “One is through genealogical relation, when two languages descend from a common language historically. Another is through contact, or vocabulary borrowing.” But while the majority of English vocabulary is inherited from Germanic speech, many English words actually have Latin roots. Which languages are most similar to English? Germanic languages include German, Dutch, Danish, Norwegian, Icelandic, Swedish, and Afrikaans (in addition to English). According to McElgunn, various languages within the above “families” are also closely related.

The 20 Funniest Tweets From Women This Week (March 6-12) I Ditched Texting and Picked Up the Phone. It was late on a Thursday when my boss sent me a text message—a first. 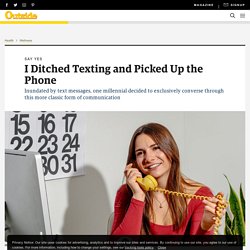 Panicked, I fired off a quick response. His message back: “That was a test. And you failed!” The week prior, I’d embarked on a mission for Outside to overhaul my digital habits. A 4K 60 FPS Remaster of the 'Rickroll' Famous Music Video For Rick Astley's 'Never Gonna Give You Up' Talking with your hands directly influences what others hear. It's common for people to "talk with their hands" when conversing with others. 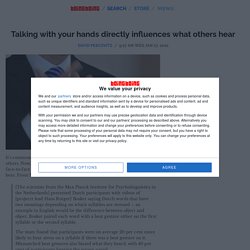 Now, researchers show that simple hand gestures during face-to-face conversations can have a very direct influence on what people hear. From New Scientist: [The scientists from the Max Planck Institute for Psycholinguistics in the Netherlands] presented Dutch participants with videos of [projecrt lead Hans Rutger] Bosker saying Dutch words that have two meanings depending on which syllables are stressed – an example in English would be the difference between object and object. Bosker paired each word with a beat gesture either on the first syllable or the second syllable.The team found that participants were on average 20 per cent more likely to hear stress on a syllable if there was a beat gesture on it. Mismatched beat gestures also biased what they heard, with 40 per cent of participants hearing the wrong sound. 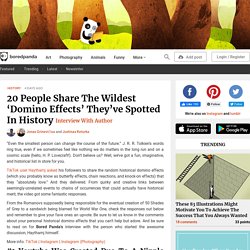 Not because of what actually happened, but because what could have happened. As President, Teddy Roosevelt championed progressive ideals, and called for a "Square Deal" between workers and businesses . He pushed for more government regulation of workplace safety, consumer protection, environmental conservation, breaking up trusts, and other policies requiring strong government intervention. However, these policies were not popular with the conservative wing of the Republican Party. When Roosevelt left office in 1909 after two terms, he groomed a successor, William Howard Taft, to carry on his policies. List of jōyō kanji. From Wikipedia, the free encyclopedia Jump to navigationJump to search Wikipedia list of written Japanese characters The jōyō kanji system of representing written Japanese consists of 2,136 characters. 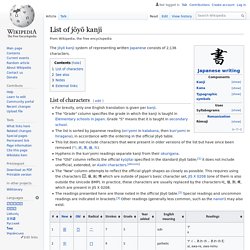 List of characters[edit] See also[edit] Notes[edit] ^ The Cabinet of Japan. External links[edit] (☞ﾟヮﾟ)☞ ☜(ﾟヮﾟ☜) 22 Body Language Examples And What They Show. Updated August 20, 2020 Medically Reviewed By: Lauren Guilbeault We use body language whenever we communicate face to face. 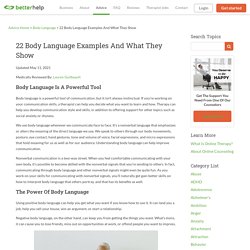 30-50 Feral Hogs. About 30-50 Feral Hogs, refers to a hypothetical argument made on Twitter defending the ownership of assault rifles which posited that such weaponry would be necessary to combat the "30-50 feral hogs that run into my yard within 3-5 mins while my small kids play. 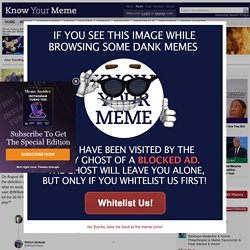 " After the tweet was posted in early August 2019, it was widely mocked on the platform, spawning parody lyrics, image macros and photoshops. Origin On August 4th, 2019, musician Jason Isbell tweeted "If you’re on here arguing the definition of “assault weapon” today you are part of the problem. You know what an assault weapon is, and you know you don’t need one. " Spread The tweet began to spread the following day as other Twitter users began to make fun of it. Other Twitter users began to make jokes about the tweet by writing song lyric parodies about the feral hogs. What does □□□ mean? Glad you asked. 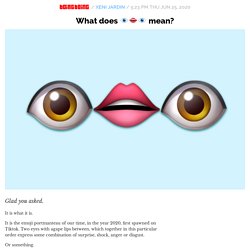 It is what it is. It is the emoji portmanteau of our time, in the year 2020, first spawned on Tiktok. Two eyes with agape lips between, which together in this particular order express some combination of surprise, shock, anger or disgust. Or something. Some are saying it is related to this video. Or not. Whatever. Little-Known Punctuation Marks We Should Be Using. Because sometimes periods, commas, colons, semi-colons, dashes, hyphens, apostrophes, question marks, exclamation points, quotation marks, brackets, parentheses, braces, and ellipses won't do, here are a few other punctuation marks to work into your everyday communications. 1. 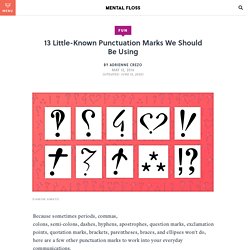 The Butt Types: a bootyful typographical project for parenthesis in different fonts. Who among us hasn't used a pair of parentheses to draw a butt? 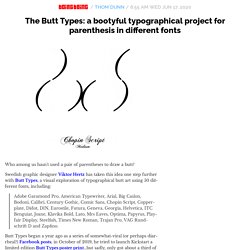 Butt Types began a year ago as a series of somewhat-viral (or perhaps diarrheal?) Facebook posts; in October of 2019, he tried to launch Kickstart a limited edition Butt Types poster print…but sadly, only got about a third of the way to his funding goal. Understanding Diner Lingo: 55 Phrases to Get You Started. Photo: avlxyz on Flickr The origins of most diner phrases are shrouded in mystery or lost to history, and different regions and restaurants use different terminology for the same items, but this list should give you an idea of what's going on when you hear your waitress screaming about wrecking two chicks on a raft. 1. Adam and Eve on a raft/log - Two poached eggs on toast 2.

A Timeline of the Most Popular Memes (2011 to 2020) If there’s one thing the Internet is good for, it’s disseminating silly memes. The guys at Know Your Meme and musician Hot Dad look back at the past decade with an animated timeline that illustrates the most popular memes, from Forever Alone to Woman Yelling at a Cat. The Best Memes Of 2019. Every Friday, the Digg editors round up the best memes of the week — which means we've all spent a lot of time thinking about memes this year. With that in mind, we've each picked our favorite meme of the year and shared some of the best examples of each. The memes will only get better in 2020 (we hope), but these are the cream of the 2019 crop: Jonathan Frakes Saying 'It's Fiction' This supercut of Jonathan Frakes — host of the 1990s TV show "Beyond Belief: Fact or Fiction" — declaring in a delightful variety of ways that something is "pure fiction" was hardly the dominant meme of the year.

The 50 Best Memes of 2019, Explained by a Young Person. Sometimes the internet goes over our heads. Luckily, we have a college student on staff to help us navigate those times. This is the many memes of 2019, youthsplained. “Memes have a lifespan of about 12 days.” 'Jibing' Is The New Dating Trend That Will Make Your Next Hook-Up Infinitely Less Awkward. We’d all love to charm each other with minimal awkwardness. Unfortunately, much like smoke and fire, embarrassment is the inevitable flipside to excitement (you are – literally – putting yourself out there, after all). This in mind there is a smooth new dating trend you need to try (or at least know about) if you want to eek the most out of your 21st-century existence: ‘jibing.’

How the loss of Native American languages affects our understanding of the natural world - Attention to the Unseen. Lost Languages Discovered in One of the World's Oldest Continuously Run Libraries. Atlasobscura. Ancient Egyptian "billboard" could rewrite history of hieroglyphs. Archaeologists from Yale and the Royal Museums of Art and History in Belgium have discovered an ancient Egyptian "billboard" that might turn back the clock on when the hieroglyphic writing system was thought to be introduced to the general population.

All My Ghosts — Real Life. Twisted textile cords may contain clues to Inca messages. Animal-hair cords dating to the late 1700s contain a writing system that might generate insights into how the Inca communicated, a new study suggests. 10-essential-european-gestures-to-learn-before-your-next-trip?email=puhnner@hotmail. How Were Hieroglyphics Deciphered? 7 Body Language Interview Mistakes You Might Be Making. Researchers "Translate" Bat Talk. Turns Out, They Argue—A Lot. 6-hand-gestures-you-need-to-know-for-your-next-trip-to-asia?email=puhnner@hotmail. Capital - The secret to stopping your ‘ummms’ What secrets are hiding in these runes? The top of the Rök runestone. The inscription begins on this side. (Photo: Science Photo Library) “In memory of Vemod stand these runes.

But Varin wrote them, the father, in memory of his dead son” Thus starts the text carved into the Rök runestone, which has puzzled researchers since it was discovered built into a 12th century church wall in Sweden’s Östergötland County in the 1600s. Decoding Russian criminal tattoos – in pictures. Paper beats computer screens. Linguistics identifies anonymous users. The obfuscation of culture (how to hide your shit online) - Final Boss Form. Real-Name Registration Threatens the Lively World of China's Microblogs. Wi-Vi system uses Wi-Fi to see through walls. ZXX: A Typeface To Resist Surveillance. Sky Deutschland to broadcast adverts directly into train passengers' heads. The internet mystery that has the world baffled. LG's HomeChat will let you text your appliances as if they were people.

The Mom Song Commercial is Brilliant. Flickr Cofounders Launch Slack, An Email Killer. Dolphin translator chirps out first word. 8 Unbelievable Twitter Public Relations Disasters (Twitter, campaign, viral, failure. The Life and Times of ¯_(ツ)_/¯ The Wonderist. BIC - Universal Typeface Experiment. The FBI has a ridiculously comprehensive list of Twitter slang. "Air waveguides" used to send optical data through the air. Can Google Build A Typeface To Support Every Written Language? : Code Switch. PostSecret. Inside The First Audio Library of Alcohol-Addled Speech (Which Just Might Help Stop Drunk Driving) How and Why to Improve Your Cursive Penmanship. How well can information be stored from the beginning to the end of time? Unraveling the Internet’s oldest and weirdest mystery. About - FOLD. Could "brainprints" replace passwords, fingerprints and retinal scans? How to Control a Job Interview. The Linguistics of Writing an Email Like a Boss.

Is it the beginning of the end for online comments? That week I tried to unplug from Slack. The Secret Psychology Of Restaurant Menus. These 10 Tattoos Have Deep Spiritual And Religious Meaning. WEBSITES\HOBOPAGE\hobosigns. Hobo. Hoboglyphs: Secret Transient Symbols & Modern Nomad Codes. The blog of The Harvard Crimson. The Period, Our Simplest Punctuation Mark, Has Become a Sign of Anger. The Official U.S. Highway Sign Font Is Changing From Clearview to Highway Gothic. Text Messaging and Online Chat Abbreviations - Webopedia. Tempoic Imprint: The Fingerprint of Speech. Lifehack. From sexual liberation to liberation from sex.