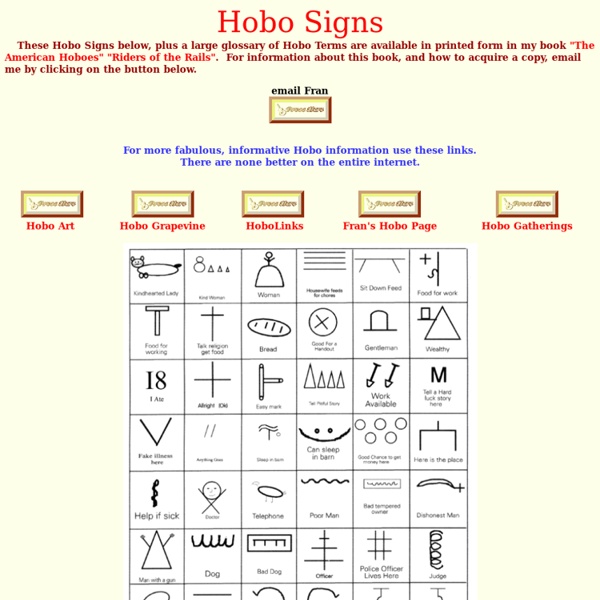 Hobo Signs These Hobo Signs below, plus a large glossary of Hobo Terms are available in printed form in my book "The American Hoboes" "Riders of the Rails". For information about this book, and how to acquire a copy, email me by clicking on the button below. email Fran For more fabulous, informative Hobo information use these links.There are none better on the entire internet. There may be one or more signs that give the same message or, at times, there may be slightly different meanings for a sign. More Hobo/Tramp Signs With so much Hobo and tramp history unrecorded all we can do is draw the best conclusions from what we are able to put together from bits and pieces of old documents that can still be found so, from my own experience, and studies, I believe these are tramp signs. Key to Hobo / Tramp Signs Below Related:  Language, Words, & Meaning • Communication Systems, Means, & Memes

Orwell was wrong: doublethink is as clear as languag... Everyone remembers Newspeak, the straitjacketed version of English from George Orwell’s novel 1984 (1949). In that dystopia, Newspeak was a language designed by ideological technicians to make politically incorrect thoughts literally inexpressible. Fewer people know that Orwell also worried about the poverty of our ordinary, unregimented vocabulary. Too often, he believed, we lack the words to say exactly what we mean, and so we say something else, something in the general neighbourhood, usually a lot less nuanced than what we had in mind; for example, he observed that ‘all likes and dislikes, all aesthetic feeling, all notions of right and wrong… spring from feelings which are generally admitted to be subtler than words’. His solution was ‘to invent new words as deliberately as we would invent new parts for a motor-car engine’. This, he suggested in an essay titled ‘New Words’ (1940), might be the occupation of ‘several thousands of… people.’ Get Aeon straight to your inbox Video

Hobo Two hobos walking along railroad tracks after being put off a train. One is carrying a bindle. Etymology[edit] Tramps and hobos are commonly lumped together, but see themselves as sharply differentiated. A hobo or bo is simply a migratory laborer; he may take some longish holidays, but soon or late he returns to work. A tramp never works if it can be avoided; he simply travels. History[edit] Cutaway illustration of a hobo stove, an improvised portable heat-producing and cooking device, utilizing air convection It is unclear exactly when hobos first appeared on the American railroading scene. In 1906, Professor Layal Shafee, after an exhaustive study, put the number of tramps in the United States at about 500,000 (about 0.6% of the U.S. population). The number of hobos increased greatly during the Great Depression era of the 1930s.[6] With no work and no prospects at home, many decided to travel for free by freight train and try their luck elsewhere. Life as a hobo was dangerous. Books[edit]

Creating The World's Greatest Anagram "It's supposed to look unlabored." ~ poet Christian Bök on anagrams If the poem above brings you some holiday cheer, know this: Those 56 lines are an anagram of 'Twas The Night Before Christmas. Yes, if you take Clement Parke Moore's famed yuletide poem, pretend the title is "The Night Before Christmas" (it's actually called "A Visit From St. Anagrams have a certain mysticism. There's a reason people believed "Elvis Lives". But those are the short ones. Canadian avant-garde poet Christian Bök has published some of the Internet's favorite anagrams. "It should look inevitable," he says. Creation reaction Photo: Toni Hafkenscheid In February of 2007, in the front window of a nondescript New York bookstore, the text pictured above appeared. "It is nothing short of perfect," Lexier says. There could be other permutations of Lexier's initial text, but Bök added his own "subsidiary constraints", a practice for which he's become popular in the avant-garde poetry world. Lego ogle Stasis assist

Hoboglyphs: Secret Transient Symbols & Modern Nomad Codes A Way with Words | Jump Steady To transmit information during wartime, various industries used to encode their messages letter by letter with an elaborate system–a primitive version of today’s digital encryption. Grant breaks down some of those secret codes, and shares the story of the most extensive telegram ever sent. Plus, we’ve all been there: Your friends are on a date, and you’re tagging along. Are you a “third wheel”–or the “fifth wheel”? This episode first aired November 20, 2015. Download the MP3. Cipher and Secret Letter CodeGreat news for scavenger-hunt designers, teenage sleepover guests, and anyone else interested in being cryptic! Fifth Wheel vs. Happy Birthday Without a Shirt! Gentleman’s GrottoA follow up to our discussion on man caves; one listener suggests we try to popularize the term “gentleman’s grotto.” Yuppies, Dinks, and SilksWe spoke on the show not long ago about yuppies and dinks, but neglected to mention silks: households with a single income and lots of kids. Photo by Annie McManus Thorne.

Flyby | The blog of The Harvard Crimson Hundreds of high school prefrosh will be coming to campus this weekend, phones in hand, thumbs at the ready. In high school, texting was all about the abbreviations and acronyms. Cool texters were the ones who could throw around g2g, LOL, and idk without a second thought. 1. 2. 3. 4. 5. 6. Dinter, bitz and gwop: a guide to youth slang in 2016 If you struggle to understand the teenagers and young people around you when they call their schoolfriend a durkboi and try to cadge some peas, you are not alone. The idea that they are communicating in a different language from their parents has been the subject of excited chatter on parenting websites and among some researchers. A defining characteristic of youth slang is thought to be its faddishness – the fact that terms have a rapid turnover, quickly coming in and out of fashion and then disappearing before parents and teachers have time to decode them. The reality is more complicated: novelty is all-important but for each generation the expressions they encounter will be new to them. So although each age group and almost every local clique do invent their own words, there is a common core of slang that persists for years: such as cool, wicked, solid and sick for good, and chilling for relaxing. A wealth of words for the same thing Variations on a theme

The Period, Our Simplest Punctuation Mark, Has Become a Sign of Anger This is an unlikely heel turn in linguistics. In most written language, the period is a neutral way to mark a pause or complete a thought; but digital communications are turning it into something more aggressive. “Not long ago, my 17-year-old son noted that many of my texts to him seemed excessively assertive or even harsh, because I routinely used a period at the end,” Mark Liberman, a professor of linguistics at the University of Pennsylvania, told me by email. How and why did the period get so pissed off? It might be feeling rejected. sorry about last nightnext time we can order little caesars Than I am to send a single punctuated message: I’m sorry about last night. And, because it seems begrudging, I would never type: sorry about last night.next time we can order little caesars. “The unpunctuated, un-ended sentence is incredibly addicting,” said Choire Sicha, editor of the Awl. Other people probably just find line breaks more efficient. It’s a remarkable innovation.

Words of 2015 round-up Word of the Year season has closed with the selections of the American Dialect Society this past weekend, so it’s time to reflect on the different words of the 2015. The refugee crisis and gender politics have featured prominently in selections around the globe as well as the influence of technology. In the English-speaking world: Collins Dictionary named “binge watch” as their Word of 2015. Oxford Dictionaries selected the “Face with Tears of Joy” emoji. Dennis Baron selected the gender-neutral singular “they” as his Word of the Year. Quartz’s (unofficial) nomination for Word of the Year is also the singular “they”. The Australian National Dictionary Centre’s Word of the Year is “sharing economy”. Dictionary.com selected “identity”. Merriam-Webster selected the suffix “-ism”. Cambridge Dictionaries selected “austerity”. The Association of National Advertisers (ANA) selected “content marketing”. Global Language Monitor selected “microaggression”. In New Zealand, Public Address selected “quaxing”.

These 10 Tattoos Have Deep Spiritual And Religious Meaning That’s what zhe said: As genders blur, language is rapidly adapting On January 8 the American Dialect Society announced “they” as its 2015 Word of the Year. Some may be surprised that the common pronoun beat out newcomers “on fleek” and “ammosexual.” But “they” didn’t win because of the way it’s traditionally been used as a plural pronoun. Rather, it won because of the way it’s being now applied as a gender-neutral, singular form that can be applied to either sex. It’s only the most recent example of how the English language, from titles to pronouns, is in the process of adapting to new cultural attitudes about gender. Mx-ing up titles To add a touch of formality when addressing people, courtesy titles continue to be used to signal politeness. Now there’s a similar movement to introduce a courtesy title that doesn’t specify sex at all: the gender-neutral “Mx.” Last year, Mx. was added to OxfordDictionaries.com. Finding a neutrality agreement Linguists call pronouns that can apply to either sex epicene pronouns. They be like As genders blur, so does language

The Official U.S. Highway Sign Font Is Changing From Clearview to Highway Gothic In a notice posted in the Federal Register on Monday, the U.S. Federal Highway Administration announced a small change that has huge implications for the nation. The agency terminated an order it had issued back in 2004 approving the use of a new font in highway signs. By ending its “Interim Approval for Use of Clearview Font for Positive Contrast Legends on Guide Signs,” the FHWA reversed its position on Clearview, a font developed to improve highway-sign legibility on the roads. Just 12 years later, the FHWA is changing course: Highway Gothic is the only font for U.S. highways going forward. The announcement took Donald Meeker by complete surprise. “It’s unfortunate. A new font for older drivers Clearview was made to improve upon its predecessor, a 1940s font called Highway Gothic, at a time when an aging Baby Boomer generation meant lots of older drivers on the road. “Helen Keller can tell you from the grave that Clearview looks better,” Meeker says. At the time, the FHWA agreed.

The Kids Are ALL-CAPS Good Internet citizens are supposed to hate all-caps writing. It's shouty, it's misused. But it can also help solve a modern visual problem. Imagine "someone looking at a feed,” says the Canadian artist Alex McLeod, and wondering, “How can I stand out?” For a living, McLeod sells phantasmagoric prints and digital files through his website. Twitter is where he hones his online persona, by writing surrealist thoughts in all-caps to attract attention. There's a basic utility to the style. Weird Twitter -- the unofficial name for the willfully absurd slice of the platform McLeod aligns with -- is by definition hard to catalog. All-caps tweeters twist their humor differently. Perhaps understandably, writers from marginalized communities seem more inclined to amplify their words this way than others. When he wrote it, Hughes was facing the problem McLeod describes, of forcing an audience. Hughes’ only all-caps work came as a surprise. Offline, we celebrate the heft of capital letters.