What Would Dad Say » Ten Ways To Make People Like You 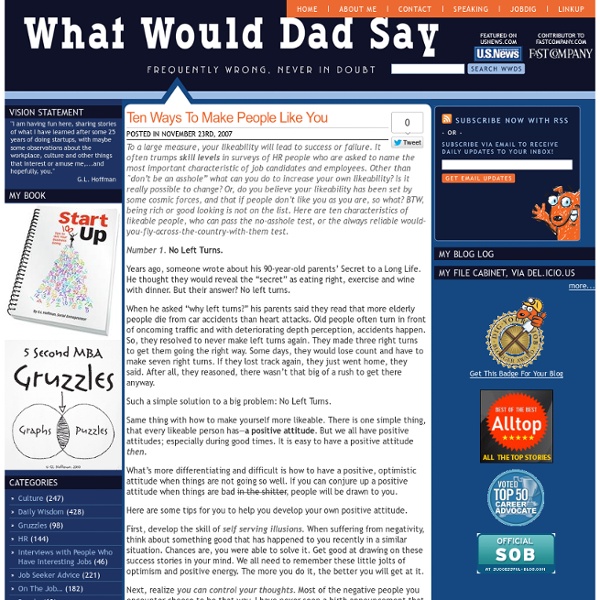 5 Ways to Change Someone's Mind An expert recently claimed that knowing--and using-- a few simple rules can help you change the minds of other people. The first rule of changing minds is to keep your message short, sharp, and simple. People tend to respond less well to long convoluted arguments, according to Kevin Dutton, Ph.D., author of Dutton's book isn't itself a short or oversimplified how-to book. The crux of Dutton's message is contained in his five elements, made easy to remember with the acronym . IMPLICITY: Keep your message short, sharp, and simple to convince people it's true. ERCEIVED SELF-INTEREST: Con men agree it's the key to getting us to do something we didn't think we wanted to. NCONGRUITY: Surprise people -- tell them your cupcake is 400 cents rather than four dollars and they're far more likely to buy it. ONFIDENCE: The more confident you are, the more we believe you're right -- even when we know your facts are wrong. As I read , I had a question about good versus evil . Read Kevin Dutton's blog .

Persuasion: The Sleeper Effect How to change attitudes months after a persuasive message is delivered. In the 1940s during WWII, the US Department of War wanted to know if their propaganda films were really working. So they carried out a series of experimental studies into how they affected soldier’s attitudes. The complacent assumption was that the films should easily influence the average GI. While the films were informative and did strengthen some existing attitudes, experiments showed they were extremely unlikely to make soldiers more optimistic about the war in general (Hovland et al, 1949). In retrospect this should have come as little surprise since the soldiers knew these were propaganda films designed to change their attitudes, so their defenses were up. What they did discover, though, was that some of the films did have an effect on soldiers after months had passed. Big impact Since then the sleeper effect has had a rockier history than the average soap opera character. Know the source before the message

Cialdini's Six Principles of Influence - from MindTools.com Convincing Others to Say "Yes" (Also known as the Six Weapons of Influence) How do you influence others? © iStockphoto/blackred You've come up with a fantastic idea for a new product. However, you haven't had much success with this in the past. Influencing others is challenging, which is why it's worth understanding the psychological principles behind the influencing process. This is where it's useful to know about Cialdini's Six Principles of Influence. In this article, we'll examine these principles, and we'll look at how you can apply them to influence others. About the Six Principles The Six Principles of Influence (also known as the Six Weapons of Influence) were created by Robert Cialdini, Regents' Professor Emeritus of Psychology and Marketing at Arizona State University. The six principles are as follows: 1. As humans, we generally aim to return favors, pay back debts, and treat others as they treat us. 2. Cialdini says that we have a deep desire to be consistent. 3. 4. 5. 6. Warning:

Creating False Memories Elizabeth F. Loftus In 1986 Nadean Cool, a nurse's aide in Wisconsin, sought therapy from a psychiatrist to help her cope with her reaction to a traumatic event experienced by her daughter. During therapy, the psychiatrist used hypnosis and other suggestive techniques to dig out buried memories of abuse that Cool herself had allegedly experienced. In the process, Cool became convinced that she had repressed memories of having been in a satanic cult, of eating babies, of being raped, of having sex with animals and of being forced to watch the murder of her eight-year-old friend. When Cool finally realized that false memories had been planted, she sued the psychiatrist for malpractice. In all four cases, the women developed memories about childhood abuse in therapy and then later denied their authenticity. My own research into memory distortion goes back to the early 1970s, when I began studies of the "misinformation effect." False Childhood Memories My research associate, Jacqueline E.

HOW TO CHEAT AT EVERYTHING Over lunch with Simon Lovell, a fascinating former card shark, Allison Schrager learns all sorts of things about how swindlers operate ... Special to MORE INTELLIGENT LIFE "I can spot someone's weakness a mile away. In any room I can pick out the best target," says Simon Lovell, reformed con artist and famed magician, when asked over lunch about the root of his talents. "Take that woman over there." He motions across the room towards a lady speaking to a man engrossed in his menu--"vulnerable, needy, looking for attention from the man she is with, but he won't give it to her. "Or that man over there, over-dressed, too neat, over-confident, thinks he is too smart to be taken." "But ultimately, anyone can be conned, if you have the balls to do it." Simon Lovell should know. Presently, instead of subjecting people to cons, Mr Lovell stars in a one-man off-Broadway show, "Strange and Unusual Hobbies". It requires avid study of psychology and body language. But I would make a poor con artist.

#53 – How to detect bullshit By Scott Berkun, August 9, 2006 Everyone lies: it’s just a question of how, when and why. From the relationship saving “yes, you do look thin in those pants” to the improbable “your table will be ready in 5 minutes”, manipulating the truth is part of the human condition. Accept it now. I’m positive that given our irrational nature and difficultly accepting tough truths, we’re collectively better off with some of our deceptions. But lies, serious lies, should not be encouraged as they destroy trust, the binding force in all relationships. Why people BS: a primer The first lie in the Western canon comes from the same joyful tome as the first murders, wars and plagues: the Old Testament. To recap from the book of Genesis, God tells Adam and Eve not to eat fruit from the tree of knowledge, as pretty as it is, for they’ll die. Please note that in this tale nearly everyone lied. People lie for three reasons; the first is to protect themselves. Ok, enough philosophy: lets get to detection.

Four Rules to Understand What Makes People Tick Breaking down human behavior into rules might seem like a gross simplification. But even with the complexities, it is easy to fall into the same mistakes. I’d argue that many heated fights, lost sales and broken hearts are caused by a few critical errors. If you make the wrong assumptions, you’ve lost before you begin. By keeping in mind these rules, you can avoid repeating the same mistakes. Rule One: People Mostly Care About Themselves People aren’t thinking about you. I’ve used this example before but I believe it deserves repeating. Only a tiny sliver is devoted to empathy. This means that you occupy only a tiny percentage of a persons thoughts. Rule Two: People are Motivated by Selfish Altruism To say all behavior is strictly selfish would be misleading. By studying primates, researchers noticed four main categories of selfish altruism. Dominance - Some primates will give help as a way of asserting dominance in the group. Rule Three: People Don’t Think Much Applying the Four Rules