A review and synthesis of the first 20Â years of PET and fMRI studies of heard speech, spoken language and reading. Functional Neuroimaging of Speech Perception in Infants. Hagoort and Levelt 326 (5951): 372. Language Acquisition and Brain Development. Bilingualism : Consequences for Language, Cognition, Development, and the Brain. Fronto-temporal brain systems supporting spoken language comprehension. A Dissociation Between Linguistic and Communicative Abilities in the Human Brain. Renewal of the Neurophysiology of Language: Functional Neuroimaging. In the last two decades, the neuroimaging of language has produced a profusion of data using a wide range of cognitive contexts, even though the tasks and paradigms used might a priori appear to be similar. 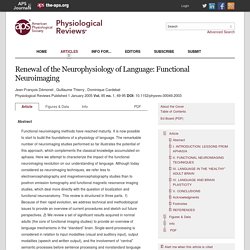 In general, these studies have focused on averaged data (and thus blurred images) obtained in relatively small groups (typically <20 participants, often <10) involving young, well-educated normal subjects. The following review is not exhaustive. Auditory processing and the development of language and literacy. Abstract This paper considers evidence for basic auditory processing impairments associated with dyslexia and specific language impairment, against a back-drop of findings from studies of the normal development of auditory and phonological processing. 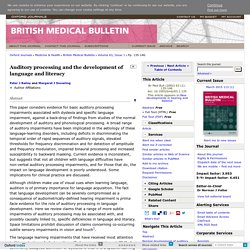 A broad range of auditory impairments have been implicated in the aetiology of these language-learning disorders, including deficits in discriminating the temporal order of rapid sequences of auditory signals, elevated thresholds for frequency discrimination and for detection of amplitude and frequency modulation, impaired binaural processing and increased susceptibility to backward masking. 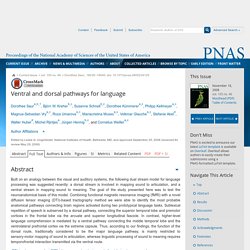 Ungerleider, National Institutes of Health, Bethesda, MD, and approved September 25, 2008 (received for review May 29, 2008) Abstract Built on an analogy between the visual and auditory systems, the following dual stream model for language processing was suggested recently: a dorsal stream is involved in mapping sound to articulation, and a ventral stream in mapping sound to meaning. The goal of the study presented here was to test the neuroanatomical basis of this model.

Current theories on brain organization suggest that cognitive functions such as language are organized in widespread, segregated, and overlapping networks (1). One of the first large-scale network models on language was elaborated by Wernicke (2) in the 19th century. Building on this analogy, Hickok and Poeppel (6, 7) and others (e.g., refs. 8 and 9) recently proposed a dual stream model for auditory language processing.

Results Fig. 1. fMRI results. Table 1. Fig. 2. Table 2. Fig. 3. Â» Language and Revolutionary Consciousness. From the outset, ‘spirit’ is cursed with the ‘burden’ of matter, which appears in this case in the form of agitated layers of air, sounds, in short, of language. 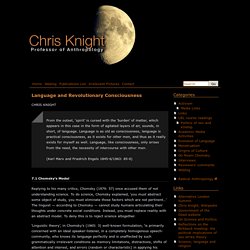 Language is as old as consciousness, language is practical consciousness, as it exists for other men, and thus as it really exists for myself as well. Language, like consciousness, only arises from the need, the necessity of intercourse with other men. (Karl Marx and Friedrich Engels 1845-6/1963: 85-6) 7.1 Chomsky’s Model Replying to his many critics, Chomsky (1979: 57) once accused them of not understanding science. In his capacity as a natural scientist, Chomsky (1976: 186) sees people as ‘natural objects’, their language a ‘part of nature’. For Chomsky, linguistics can aspire to the precision of physics for a simple reason — language itself is a ‘natural object’ (2000: 106-33). 7.2 The Language Machine As his argument unfolds, Chomsky rules out this first, crude design for his envisaged machine — it clearly would not work. 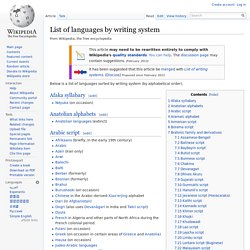 Dog is a dog is a dog: Infant rule learning is not specific to language. Patterns of naming objects and actions in children with word finding difficulties. Weighting of vowel cues explains patterns of word-object associative learning. Left-Hemisphere Control of Oral and Brachial Movements and Their Relation to Communication. The left cerebral hemisphere of the brain in man is known to be involved in both vocal and manual communication, as evidenced by speech and manual sign language disorders after left-hemisphere pathology. 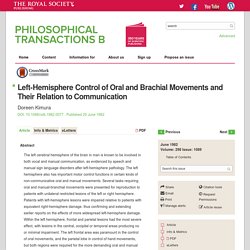 Within the left hemisphere, frontal and parietal lesions had the most severe effect, with lesions in the central, occipital or temporal areas producing no or minimal impairment. Role of facial expressions in social interactions. Abstract The expressions we see in the faces of others engage a number of different cognitive processes. 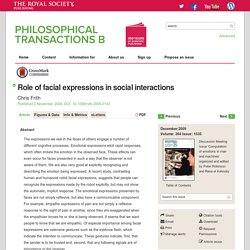 Emotional expressions elicit rapid responses, which often imitate the emotion in the observed face. These effects can even occur for faces presented in such a way that the observer is not aware of them. We are also very good at explicitly recognizing and describing the emotion being expressed. A recent study, contrasting human and humanoid robot facial expressions, suggests that people can recognize the expressions made by the robot explicitly, but may not show the automatic, implicit response. 1.

Imitation as an inheritance system. Abstract What is the evolutionary significance of the various mechanisms of imitation, emulation and social learning found in humans and other animals? 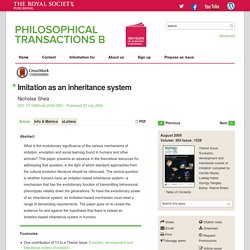 This paper presents an advance in the theoretical resources for addressing that question, in the light of which standard approaches from the cultural evolution literature should be refocused. The central question is whether humans have an imitation-based inheritance system—a mechanism that has the evolutionary function of transmitting behavioural phenotypes reliably down the generations. To have the evolutionary power of an inheritance system, an imitiation-based mechanism must meet a range of demanding requirements. The paper goes on to review the evidence for and against the hypothesis that there is indeed an imitation-based inheritance system in humans. Convergence of Visual and Tactile Shape Processing in the Human Lateral Occipital Complex. 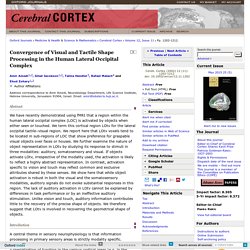 Email: amir@lobster.ls.huji.ac.il. Abstract We have recently demonstrated using fMRI that a region within the human lateral occipital complex (LOC) is activated by objects when either seen or touched. We term this cortical region LOtv for the lateral occipital tactile–visual region. Introduction A central theme in sensory neurophysiology is that information processing in primary sensory areas is strictly modality specific. This finding raises an essential question. We show here that the object-related activation is robust in both the visual and tactile modalities. Cultural Confusions Show that Facial Expressions Are Not Universal. Figure 1 Fixation Distributions (A) Fixation distributions for each observer group collapsed across race of face and seven expression categories (see Figure S2 for fixation distributions for each condition separately). 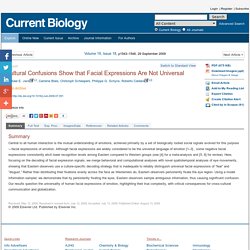 Color-coded distributions represent the density of fixations across face regions, with red showing the most densely fixated regions. Note that for East Asian (EA) observers, fixations are biased toward the upper part of the face as compared to Western Caucasian (WC) observers, where fixations are more evenly distributed across the face, including the mouth. Cultural evolution: implications for understanding the human language faculty and its evolution. Abstract Human language is unique among the communication systems of the natural world: it is socially learned and, as a consequence of its recursively compositional structure, offers open-ended communicative potential. The structure of this communication system can be explained as a consequence of the evolution of the human biological capacity for language or the cultural evolution of language itself.