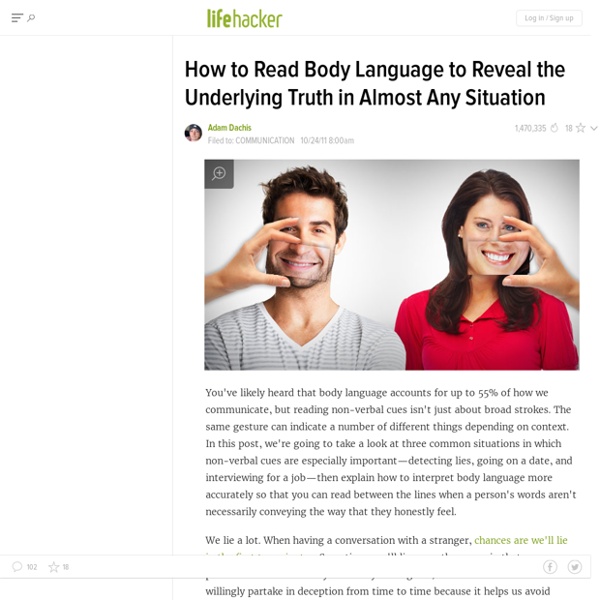 Kinja is in read-only mode. We are working to restore service. It's a holistic thing. If you see someone displaying several of these they might be lying. Just leaning away might be about comfort, but leaning away, looking away and giving too many details might indicate dishonesty. Maybe you find crossing your arms comfortable because it's a protective stance. Flagged Yeah I guess it's easier to claim we all fit into specific boxes and that if someone has there arms crossed they are protecting themselves from something or other. Holistic as in a whole picture. This has already been discredited in the past so maybe you shouldn't fall for everything you read and be a little skeptical of this type of profiling.

How to Detect Lies - body language, reactions, speech patterns Interesting Info -> Lying Index -> How to Detect Lies Become a Human Lie Detector (Part 1) Warning: sometimes ignorance is bliss. After gaining this knowledge, you may be hurt when it is obvious that someone is lying to you. The following deception detection techniques are used by police, forensic psychologists, security experts and other investigators. 5 Unusual Ways to Become a Better Speaker You’ve been asked to speak at an important event. It’s a great opportunity and you should be thrilled—but since you rarely speak, especially in a formal setting, all you can think about is bombing. Unfortunately, captivating an audience is definitely a skill that takes years to develop and hone. Since you don’t have that kind of time, here are five unconventional ways to become a better speaker almost overnight: 1. Share an emotional story.

Four More Custom Searches You Should Enable In Your Browser Right Now Forgive me, total noob with these using Chrome. I can't get any of them to work. 1. 10 Ways to Instantly Build Self Confidence Self confidence is the difference between feeling unstoppable and feeling scared out of your wits. Your perception of yourself has an enormous impact on how others perceive you. Perception is reality — the more self confidence you have, the more likely it is you’ll succeed. Although many of the factors affecting self confidence are beyond your control, there are a number of things you can consciously do to build self confidence. By using these 10 strategies you can get the mental edge you need to reach your potential. 1.

6 Weird Things That Influence Bad Behavior More Than Laws Diligent readers of Cracked already know that our brains can be tricked by just about anything: manipulated images, our birth order and shiny things. But we can also be tricked into being generous, good people by our surroundings. Of course, it goes the other way, too. Your morality at any given moment can be influenced by ... 25 Acts of Body Language to Avoid Our body language exhibits far more information about how we feel than it is possible to articulate verbally. All of the physical gestures we make are subconsciously interpreted by others. This can work for or against us depending on the kind of body language we use.

Library A library is an organized collection of sources of information and similar resources, made accessible to a defined community for reference or borrowing. It provides physical or digital access to material, and may be a physical building or room, or a virtual space, or both.[1] A library's collection can include books, periodicals, newspapers, manuscripts, films, maps, prints, documents, microform, CDs, cassettes, videotapes, DVDs, Blu-ray Discs, e-books, audiobooks, databases, and other formats. Libraries range in size from a few shelves of books to several million items. In Latin and Greek, the idea of bookcase is represented by Bibliotheca and Bibliothēkē (Greek: βιβλιοθήκη): derivatives of these mean library in many modern languages, e.g. French bibliothèque. The first libraries consisted of archives of the earliest form of writing—the clay tablets in cuneiform script discovered in Sumer, some dating back to 2600 BC.