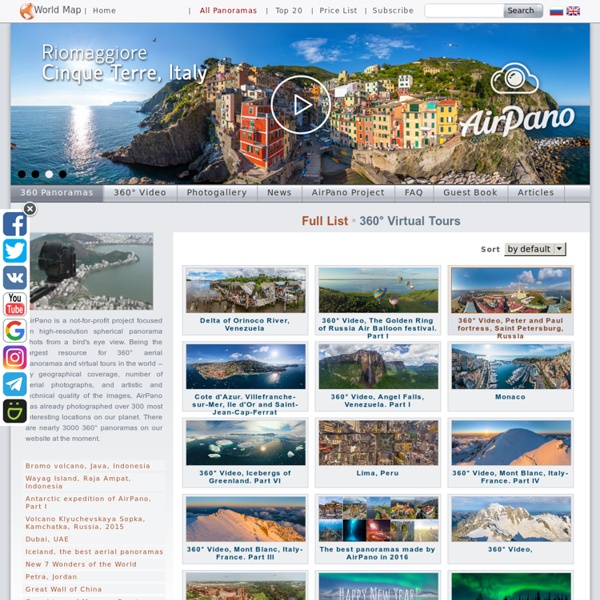 9 Excellent Free Map Creation Tools for Teachers and Students 1- Umapper UMapper is a great mapping tool for educators. It allows its users to create and manage interactive maps and geogames online. These maps can be shared with others or be embedded in blogs and websites Retro Futurism Retro Futurism Frank R. Paul was an illustrator of US pulp magazines in the science fiction field. He was born in Vienna, Austria… Frank R. How to do time lapse photography: tips for best practice Have you wondered how to do time lapse photography? All you need is your camera and some free time lapse software. Here’s how to do it. Fancy capturing people rushing around crowded cities or the transition of day into night? Time-lapse may seem tricky, but it’s actually easy. The most important requirement is an interval timer, which many Nikon and Pentax cameras have built-in.

Online Tours Go to content Go to navigation Go to search Change language Accessibility Support the Louvre Home>Collection & Louvre Palace>Online Tours Online Tours Visit the museum's exhibition rooms and galleries, contemplate the façades of the Louvre... Teachers Homepage - National Geographic Education This website would like to remind you: Your browser (Firefox 17) is out of date. Update your browser for more security, comfort and the best experience on this site. Educators! Lessons Drawspace Pro Lessons are designed for artists of all levels and educators, and are logically organized into resources and activities. Eventually, all lessons and E-books authored by Brenda Hoddinott will be available here: four to eight brand new lessons and newly-revised older lessons are being added every month! Upgrade Now: Download all 246 lessons and 4 e-books! Try for Free: Download lessons marked as "Free"! Free 1.1.R1 Glossary Of Art Terms Definitions of art-related terms used in the resources and activities of Drawspace Curriculum (updated February 2013)

What's causing Nigeria's oil spills? A report last week from Amnesty International said energy companies operating in the oil-rich Niger Delta region weren't entirely up front about what's causing the "hundreds" of spills reported every year in the region. In a 66-page report, the rights group said oil companies, in particular Royal Dutch Shell, have made numerous claims about sabotage and oil theft that raise a series of questions. Now, lawmakers in OPEC member Nigeria are mulling legislation that would tighten penalties for oil companies responsible for the spills. The cost, if passed, would be in the millions of dollars for the companies operating there. Amnesty, in its report, said the hundreds of oil spills reported in Nigeria every year are ruining the environment and putting human lives at risk.

360° Aerial Panoramas, 360° Virtual Tours Around the World, Photos of the Most Interesting Places on the Earth Lying north of the Arctic circle within the severe waters of the Norwegian sea, the Lofoten archipelago is known for its wild nature, majestic mountains, deep fjords, noisy bird settlements, the purest water and long sandy beaches. These lands were the habitat for Vikings and they still have some evidence of their life. In the small village of Borg archaeologists uncovered the longest Viking dwelling ever found. An 83-meters-long house was restored and now operates as a historical museum of the legendary Vikings. Comparing to other places lying on the same latitude the Lofotens feature a rather mild climate due to the Gulf Stream. Between May and July there is the period of the midnight sun and from the middle of September to the middle of April the colourful Polar lights can be witnessed.

Interactives archive: Disasters Anatomy of KatrinaTrack the hurricane from its birth in the open ocean through its catastrophic encounter with the Gulf Coast. Anatomy of NyiragongoFind out what features make this unquiet volcano tick. Anatomy of a TsunamiFollow the tsunami from its birth at the seafloor to its devastating collision with coasts around the Indian Ocean. Asteroid That Hit L.A., TheA catastrophe calculator lets you try out some "what if" scenarios. Blasts From the PastExplore a clickable map of supereruptions around the world.

Issues in the environmental sanitation of Lagos mainland, Nigeria Lagos is asserted to be the filthiest capital in the world. The influx of people into the metropolitan area has no corresponding technology to cope with the solid waste generated by the ever increasing population. Coupled with this lack of technology is the lack of adequate knowledge of the composition and generation rate of the refuse which has led to mismanagement of the environment.