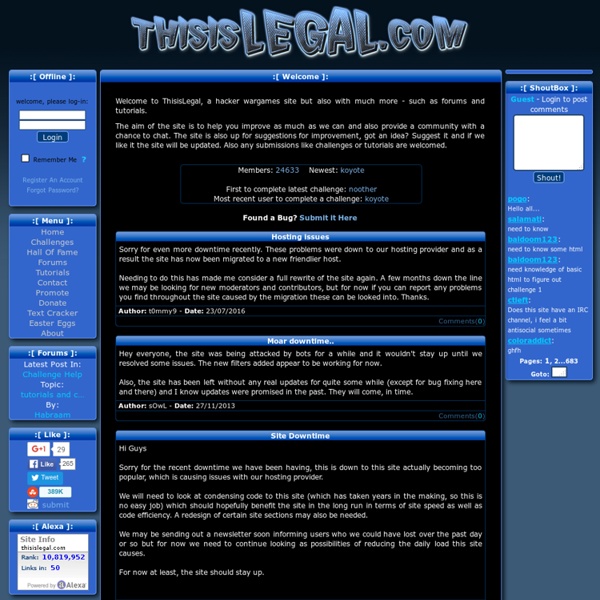 Members: 11206 Newest: dbyt3r First to complete latest challenge: xen Most recent user to complete a challenge: Thundersnow Completely recoded the score and ranking system as it was flawed. You should see changes to your rank score on your profile page soon. Now I can go on and build the HoF page (finally!).

The Ultimate Excel Cheatsheet Working with the new Excel 2007 is now more frustrating than ever when it comes to finding the right commands. Sometimes it seems like part magic and part luck. That’s why we’ve put together the cream of the crop of Excel shortcuts in easy to use cheatsheets you can print up and keep handy. Highlighting the most commonly used and commonly looked for Excel commands, this list puts it all at your fingertips. Vote Now! Top Ten Web Hacking Techniques of 2011 Every year the Web security community produces a stunning amount of new hacking techniques published in various white papers, blog posts, magazine articles, mailing list emails, etc. Within the thousands of pages are the latest ways to attack websites, Web browsers, Web proxies, and so on. Beyond individual vulnerability instances with CVE numbers or system compromises, we’re talking about actual new and creative methods of Web-based attack. The Top Ten Web Hacking Techniques list encourages information sharing, provides a centralized knowledge-base, and recognizes researchers who contribute excellent work.

Learn Ethical Hacking Online - HackingLoops There’s a seemingly endless number of free open-source tools for penetration testing, and most of them seem to gravitate around the Kali Linux distribution. But with so many free tools, it’s easy to miss out on some of the best ones. So today we’re going to take a closer look at Armitage, define what it is, and define how it works. However, there’s a few things that you need to know before we start digging into the dirty details of how to use this tool. Naturally, I do have to give a brief warning before we get started, too. Don’t misuse or abuse any of the tools mentioned in this article for two reasons. Free Excel Downloads. Excel Functions and VBA (Visual Basic for Applications) AdvancedFilter.zip This is a zipped Excel Workbook that has six working examples using Excels Advanced Filter. It has three that use no formulas and three that do use formulas. DFunctionsWithValidation.zip This is a zipped Excel Workbook that shows how you can use Data Validation and the Dfunctions to extract data from a Table.

How To Become A Hacker Copyright © 2001 Eric S. Raymond As editor of the Jargon File and author of a few other well-known documents of similar nature, I often get email requests from enthusiastic network newbies asking (in effect) "how can I learn to be a wizardly hacker?". Back in 1996 I noticed that there didn't seem to be any other FAQs or web documents that addressed this vital question, so I started this one. Top 15 Open Source/Free Security/Hacking Tools 1. Nmap Nmap (“Network Mapper”) is a free and open source (license) utility for network discovery and security auditing. Nmap uses raw IP packets in novel ways to determine what hosts are available on the network, what services (application name and version) those hosts are offering, what operating systems (and OS versions) they are running, what type of packet filters/firewalls are in use, and dozens of other characteristics. Nmap homepage. 2.

The glider: an Appropriate Hacker Emblem The Linux folks have their penguin and the BSDers their daemon. Perl's got a camel, FSF fans have their gnu and OSI's got an open-source logo. What we haven't had, historically, is an emblem that represents the entire hacker community of which all these groups are parts. This is a proposal that we adopt one — the glider pattern from the Game of Life. About half the hackers this idea was alpha-tested on instantaneously said "Wow!