10 Beautiful Places In The World That Actually Exist 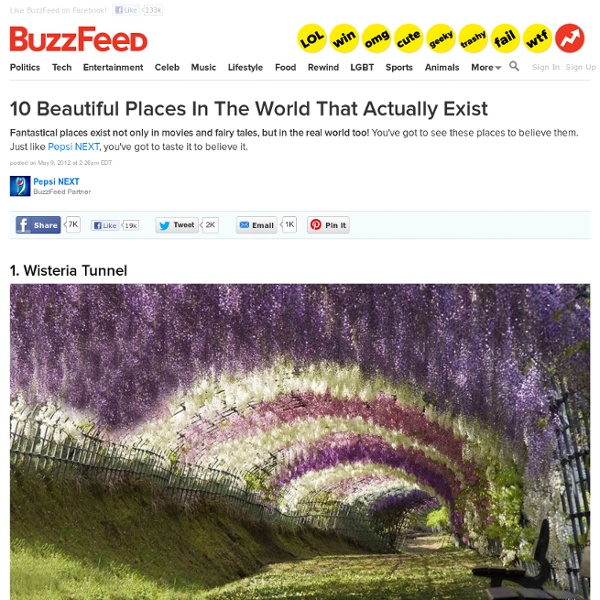 Pictures of Moments Speak More than Thousand Words...... Picture can speak thousands of words. Random pictures of insignificant moments always been the most important and most valuable. Photographers and painters beautifully imprint huge number of events, objects and types. Some do it by accident on the momentary desire. Others do it in order to fix the time for the future. Colour photographs of circus performers, 1940s-1950s Ringling Brothers circus girl, 1945 Birthday flowers, 1941 Barnum & Bailey Showgirl, 1946 The Beauty Of Cinemagraph GIFs Developed in 2011 by Jamie Beck and Kevin Burg, cinemagraphs are GIF images that combine still photography and video to produce a stunning effect. Typically, the entire GIF is motionless except for one or two elements, providing a brilliant juxtaposition between the motion and the motionless. For your viewing pleasure, we’ve collected 43 beautiful cinemagraph GIFs:

The Realm's Real Estate (Yurts) Here is a free copy of my book Build your own yurt, written in 1995, It has been used by a great many people who have built their own yurts. Our designs have progressed enormously since 1995. For a much more comprehensive guide see The Complete Yurt Handbook or see the rest of our website A complete guide to making a Mongolian Ger by P.R. King First edition 1995, Second edition 1997. Third edition, revised, updated, and expanded. 1997.

Most popular photography on StumbleUpon! 2011 is over, In this article, I am showcasing the most beautiful photographs that were stumbled on StumbleUpon. Let us take a look at this truly jaw-dropping collection and enjoy! Source: StumbleUpon *None of the images on this page are mine,they were found on StumbleUpon, meant to inspire.Any problems, just email. 20 Captivating Photos Shot At Exactly The Right Moment There are some things in life that make me feel dated (notice I didn’t use the word “old” LOL). For example, sending a fax, writing in cursive (with a pen) and talking on any phone with a cord (and twirling it around my fingers) are all things that kids born in 2011 might never have the opportunity to experience. I remember back in the days when people would say, “I wish I had my camera with me today, I could have taken some great pictures.” Now that practically everyone has a smartphone, we all have our cameras with us everywhere we go.

Stumblers Who Like 50 of the World's Best Breakfasts – Written by Victoria Philpott Not quite had your fill of breakfasts just yet? Check out our beautifully visual list of the 30 best breakfasts from around the world. 50 Images from National Geographic`s 2010 Photo Contest Writen by Bogdan / Comments Off on 50 Images from National Geographic`s 2010 Photo Contest This is one of the most anticipated annual photo contests. The deadline for the submissions is on November 30th so if you have an interesting photo, submit it. People of the Rainbow Gathering Ever hear about Rainbow Gatherings? They're temporary community events typically held in outdoor settings; a place where people practice ideals like peace, love and harmony. The original Rainbow Gathering was in 1972 and was started as an alternative to mainstream popular culture. In the United States, the annual event is held on National Forest land from July 1 through 7. The highlight is when everyone gathers together in a large circle, and each person prays silently for peace. After going to Rainbow Gatherings for several years, self-taught Canadian photographer and art director Benoit Paillé got permission to take portraits of his "brothers and sisters."

Still Life: Bent Objects UPDATE: The Return of Bent Objects Wires transform these objects from inanimate to hilarious works of art. Little polish girl McDonalds as Sculpture Materials Yeah, this is where those come from Dancing Queens Gakuranman - illuminating Japan - StumbleUpon The ruins and haikyo aficionado in me couldn’t resist making a post about Tokyo Genso‘s fabulous art depicting post-apocalyptic Japan. The illustrations have a breathtaking otherworldly quality that perfectly capture the sort of scenes I regularly come across while exploring ruins, albeit of course, on a much grander and majestic scale. Some of the scenes really aren’t stretching the truth that much either.