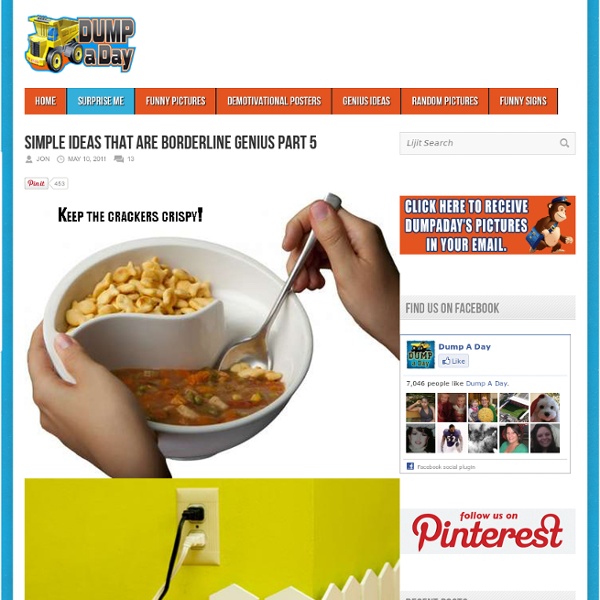 everyday beautiful life: a guide to the life you want Today I’m doing EBL a bit differently. I’m going to be sharing some links to some fantastic posts at various blogs. I’m also going to be tweeting my EBL post suggestions on Twitter {@bitsofbeauty}. If you have a post or a tip you’d like to share, just tag it #EBL. I’d love to see what you come up with! Also, I’m going to be updating this post throughout the next 24 hours, so be sure to check back!

Still life: Bent objects UPDATE: The Return of Bent Objects Wires transform these objects from inanimate to hilarious works of art. Little polish girl McDonalds as Sculpture Materials Yeah, this is where those come from Dancing Queens 16 Things I Wish They Had Taught Me in School I am 28 now. I don’t think about the past or regret things much these days. But sometimes I wish that I had known some of things I have learned over the last few years a bit earlier.

some people are just born with it « style/SWOON this house was love at first foot in the door… Jamie Laubhan-Oliver and her husband Larry Oliver are two of the most talented people I’ve ever known. Jamie is an art director for DHome/DWeddings and Larry is a senior designer for Neiman Marcus. They are both art directors and spend much of their days orchestrating amazing photoshoots. Their impeccable taste and blessed sample sale opportunities have turned their somewhat modest city townhome into a luxurious style haven. Each detail of their home is so interesting: from the alligator skull, to the collection of keys from Jamie’s father mixed with the heap of wine corks, and an armless baby doll. Each one has a story.

Another Way To Hide The Bed: Put It In A Box We often show ingenious ways of hiding the bed . French architects Emmanuel Combarel Dominique Marrec offer a new one: turn it into a sculptural element, in this case a box hanging from the ceiling. Watch Video: World's Greenest Homes From the other side, it is a short step up from the existing mezzanine. Nice idea if you have the ceiling height. Macho Cultures Are Fairer for Women - Avivah Wittenberg-Cox by Avivah Wittenberg-Cox | 12:08 PM April 27, 2012 In the past decade, and long before Dilma Roussef was elected the country’s first female (and wildly popular) President, Brazilian women have been on the rise. As in many other countries, women now outnumber men in the country’s universities. But the female edge in education (63% vs 37%) in Brazil is at the top of the scale, next to Sweden’s. Just as significantly, there has been a big move of women into the paid labor force in Brazil, and in Latin America more generally.

16 Anti Theft Gadgets and Designs to Deter Thieves 16 Anti-Theft Gadgets and Designs to Deter Thieves We all own many different cool gadgets and items that are important to us either for the utility they provide or perhaps because of an intimate or personal reason. Whatever the reason is, we really hate it when someone comes and touches our personal belongings and worst yet…steals them. In order to avoid such mishaps and unfortunate events, we have gathered here a great collection of different Anti Theft Gadgets and Bizarre Designs that are meant to help individuals make their devices and belongings less attractive, appealing or desired to a normal bystander. Moreover, there are a few security gadgets and projects that may also interest the more techy of you, who may be looking for some new gizmos to own or security diy to built.

Less is the New More: Making the Most of Small Spaces Good Design For Living in Small ApartmentsAs people migrate to smaller spaces, good design helps a lot. This is something they figured out in Europe long ago, that if you don't have a lot of horizontal room you can go vertical. Tumidei in Italy makes some of the nicest stuff, like this unit with lots of storage under the bed. This unit just raises the floor high enough for beds to slide under. This one looks a bit clinical, but has two single beds plus a pull-out double bed in between. When you read in the New York Times that professional couples with children are moving into small one-bedroom apartments in Manhattan and sleeping in closets, perhaps this stuff could be useful. 3 Words That Guarantee Failure People who fail to achieve goals almost always signal their intent to fail by using three little words: "I will try..." There are no three words in the English language that are more deceptive, both to the person who says them and the person who hears them. People who say "I will try" have given themselves permission to fail.

Back to the future Article by James Pond I am the owner of Pondly.com / art lover / electrical engineer / software developer / MBA in e-business student. I blog for pleasure and love to share my Internet findings. Web site: Irina Werning, a Buenos Aires Photographer asked friends and family to “re-enact” old photos of themselves for an ongoing project, which she christened “Back to the Future.”

Something's Hiding In Here when editors of country living magazine first approached us about designing a studio for their "house of the year" project we couldn't believe it. we would get to create our dream space, partner with a designer and they would make it all happen. ummm, YES! we immediately started pinning inspiration and brainstorming all the things important to us in a shared work space: big work table, cozy seating, shelves for our collections, and a giant wall for inspiration. we knew we wanted to play with a balance of feminine and masculine as well as new and old. after all the sketching, planning, measuring, fabric and paint swatches... there it was, just like magic - our dream studio. Booze it Up! 13 Rad Recycled Bottle Crafts & Projects Got a recycling bin full of glass bottles? Why waste them when you could have a new table lamp, candle holder, shelving unit, hummingbird feeder, glass countertop, building block – even a whole glass-bottle house? Reuse beer, wine and liquor bottles for these 13 fun and creative crafts and upcycling projects ranging up to a recycled bottle home and garden. Wine Bottle Table Lamp (images via: wit and whistle)

Banned “Tax the Rich” TED Talk slides and text here For those of you wondering if there's ever a TED Talk that presents an idea too controversial for the group to publish it, there definitely is, and venture capitalist Nick Hanauer was the one to make it. What we've got here is the full text of the TED Talks presentation Hanauer made at the March TED University conference as well as the full set of slides he presented at the conference. We do not have the video for this TED Talk because TED officials have decided not to publish it, not streaming, not for download, and certainly not for consumption on Netflix or your iPad app. This TED Talk speaks on how widening income inequality is bad in the United States (and abroad, for that matter), and how the rich should pay more in taxes. This speech was made on the 1st of March, but according to the National Journal, TED officials just this month (May 2012) told Hanauer that his remarks were both too controversial and too "political" for them to post.