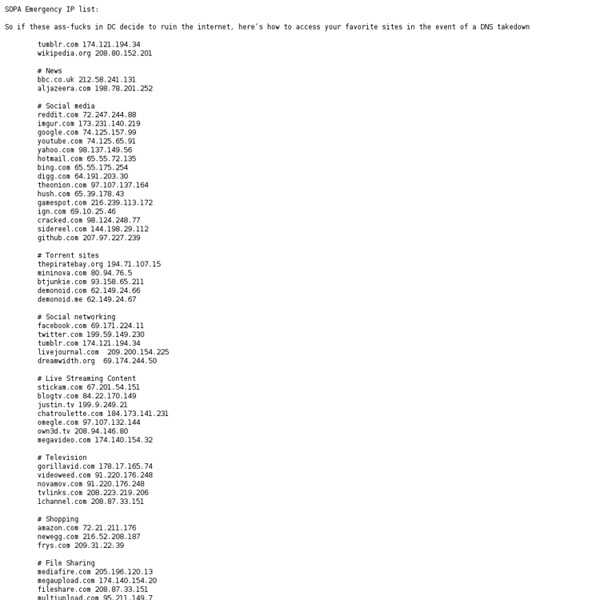 How to Build a Hackintosh Build a Hackintosh with better performance than a Mac Pro — for half the price. A comprehensive, free, step-by-step guide. Last updated March 2013 with the latest Intel Ivy Bridge processor and motherboard recommendations (which, it’s worth noting, are not available on the out-of-date Mac Pros) and OS X Mountain Lion-native installation instructions. New Bill Known As Enemy Expatriation Act Would Allow Government To Strip Citizenship Without Conviction First, Congress considered the National Defense Authorization Act, sections of which gave the President the authority to use the military to arrest and indefinitely detain Americans without trial or charge. The language was revised because of strong condemnation from the American people. But now a new bill has emerged that poses yet another threat to the American citizenry.

Why it’s hard to be a highly sensitive (HSP) introvert A handful of years ago I was so relieved to discover that there's a name (Highly Sensitive Person, aka HSP) for what I thought were uniquely weird sensitivities. I also finally understand and now even celebrate the fact that I'm highly introverted . Thanks to these new insights into my personality , I've come to appreciate that the traits that make me seem "strange" are also the reasons that I'm an effective personal coach and a successful writer and author. For most of my life I felt that if people knew what I was really like, they'd write me off as strange or different.

President Obama Signs Indefinite Detention Bill Into Law December 31, 2011 CONTACT: media@dcaclu.org WASHINGTON – President Obama signed the National Defense Authorization Act (NDAA) into law today. The statute contains a sweeping worldwide indefinite detention provision. While President Obama issued a signing statement saying he had “serious reservations” about the provisions, the statement only applies to how his administration would use the authorities granted by the NDAA, and would not affect how the law is interpreted by subsequent administrations. The White House had threatened to veto an earlier version of the NDAA, but reversed course shortly before Congress voted on the final bill.

Improve Your Google Search Skills [Infographic] Don’t limit yourself to just plugging in simple search terms to Google; check out this infographic and learn a search string search or two. You don’t need to limit yourself to searching just for simple strings; Google supports all manner of handy search tricks. If you want to search just HowToGeek.com’s archive of XBMC articles, for example, you can plug in site:howtogeek.com XBMC to search our site. The Best New Features of Adobe Photoshop CS6 Photoshop CS6 has some great new features that designers are sure to love. Upgrading from CS4 or CS5 is simple and straightforward, and the new tools are intuitive, practical, and extremely helpful for a wide variety of design purposes. Adobe put a lot of time and effort into their newest iteration of Photoshop. As a result, there are hundreds of improvements.

7 Lessons: Surviving A Zero-Day Attack - Security - Attacks/breaches Pacific Northwest National Laboratory CIO Jerry Johnson takes you inside the cyber attack that he faced down--and shares his security lessons learned. When Pacific Northwest National Laboratory detected a cyber attack--actually two of them--against its tech infrastructure in July, the lab acted quickly to root out the exploits and secure its network. PNNL then did something few other cyber attack victims have been willing to do. It decided to talk openly about what happened. The lab's CIO, Jerry Johnson, last week provided a detailed accounting of the cyber attacks. Speaking at the IW500 Conference in Dana Point, Calif., Johnson described how intruders took advantage of a vulnerability in one of the lab's public-facing web servers to plant a "drive-by" exploit on the PCs of site visitors, lab employees among them.

60 of the world's happiest facts 1. A group of flamingos is called a flamboyance. 2. If you fake laugh long enough you’ll start to really laugh, really, really hard. 3. The book cover to the prize winning short story collection, Spellbound, was chosen because author, Joel Willans, bought his wife’s engagement ring with poker winnings. Prophecy of the Popes Final part of the prophecies in Lignum Vitæ (1595), p. 311 The prophecies conclude with a pope identified as "Peter the Roman", whose pontificate will allegedly bring the destruction of the city of Rome.[3] History[edit] Statue of Saint Malachy (1094–1148), to whom Wion attributes the authorship of the prophecies. Malachy died over four centuries before the prophecies first appeared. According to an account put forward in 1871 by Abbé Cucherat, Malachy was summoned to Rome in 1139 by Pope Innocent II to receive two wool palliums for the metropolitan sees of Armagh and Cashel.

The Quick VPN Hack: Firefox Plugin FoxyProxy Sometimes you want to access US-based websites from overseas or Australian TV sites from France, but you can’t since commercial websites often have regional restrictions in place. They can be annoying and prevent you from discounts on everything from airline tickets to hotel reservations. Using a proxy you can easily get around these blocks and while there are many out there, FoxyProxy is a Firefox plugin that makes it easy. Assumptions: First, let’s assume that you are using Firefox (if you’re not it’s a free download). Second, proxies tend to be flaky so don’t stay connected unless you’re interested in getting around a regional block.