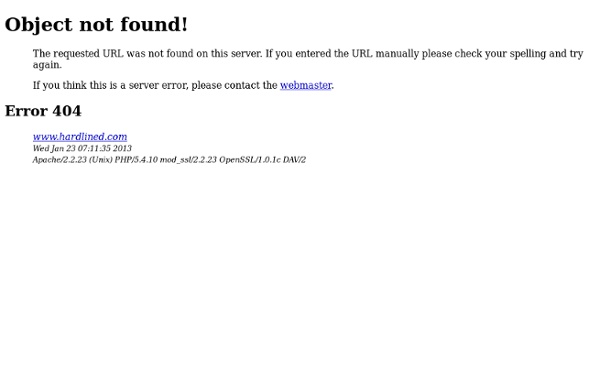 How to win Rock-paper-scissors every time I admit it. When I first heard there are actual tournaments for Rock-paper-scissors, sanctioned by the World Rock Paper Scissors Society, I laughed. I mean seriously, $50k to the winner of a game that requires no skill whatsoever? Absurd. youre-like-a-drug.jpg (JPEG Image, 400x135 pixels) It might sound funny, but there are ways to get free weed if you don't have money. The first thing to add of course it that drugs are bad. You should not use drugs, even if they are free. The Lesser Key of Solomon The Lesser Key of Solomon, also known as Clavicula Salomonis Regis[note 1] or Lemegeton, is an anonymous grimoire (or spell book) on demonology. It was compiled in the mid-17th century, mostly from materials a couple of centuries older.[1][2] It is divided into five books—the Ars Goetia, Ars Theurgia-Goetia, Ars Paulina, Ars Almadel, and Ars Notoria.[1][3] Ars Goetia[edit]

Murphy's Law Calculator Murphy's Law Calculator From a formula for * Sod's Law provided by British Gas: ((U+C+I) x (10-S))/20 x A x 1/(1-sin(F/10)) "anything that can go wrong, will go wrong!" Find out in advance whether you will be able to successfully repair your VCR, get to a meeting on time, impress your date, or be a success at any activity whatsoever ! Score: 4.355 Risk Factor: 35286.9 6 Life-Changing Uses for Binder Clips (That You Could've Easily Thought Of) from Look What I Found Yes, it may seem like an ordinary binder clip. And it is. Make no mistake -- it will keep your papers organized with the best of them. The BEST. But it's so much more. Six Comedians We Wish Would Return to Standup I've always rejected the idea that standup comedy is useful as merely a stepping stone to other things (movies, a sitcom, writing gigs). In my opinion, it’s as noble a final destination as any other. That’s what made Seinfeld documentary Comedian so refreshing to watch — a legendary, insanely-wealthy comic heading enthusiastically back into the standup fray, while a virtual no-name claws and screams as he tries to escape it.

The Egyptian Book of the Dead Index Sacred Texts Egypt The Papyrus of Ani by Introduction Translation Because of the substantial amount of hieroglypics interspersed in the original text, I have omitted the ### 'glyph' placeholder where context permits, for readability. Only actual illustations have been inserted into the file. 25 clever ideas to make life easier Via: amy-newnostalgia.blogspot.com Why didn’t I think of that?! We guarantee you’ll be uttering those words more than once at these ingenious little tips, tricks and ideas that solve everyday problems … some you never knew you had! (Above: hull strawberries easily using a straw). Via: apartmenttherapy.com Rubbing a walnut over scratches in your furniture will disguise dings and scrapes.

How to Forecast Weather Ever wondered how to forecast the weather without actually using instruments? Check the Clouds: Clouds can tell us a lot about the weather. For example, they can tell us if it’s going to be warmer on a particular night by simply being there. That’s because they prevent heat radiation from escaping. They can also tell you whether there will be rain and whether there will be bad weather in general (when you see clouds moving in opposite directions of each other). How to Make Office Weapons Out of Office Supplies Wow, if you thought working at your white-collared job, sitting in your well equipped air-conditioned office, thinking that this is probably one of the safest place to be… you may just want to think twice about that. The office is a jungle. Beside having to watch your back against office colleagues who may be wolf in sheep’s clothes, you may just have to watch out for those seemingly utilitarian office supplies, because in conjuncture with other seemingly innocent office supplies, they may just result to be one of the deadliest office weapon yet. Below is an example of our favorite office supplies- binder clips, turned into office weapons.

Per Color by Marco Ugolini - VLAMBOYANT On 13-04-2011, In photography, by oscar Matching your daily groceries in style and buy them by colour. That would be a fun thing to do when you’re bored on a lazy Sunday. Per Color pictures are exhibited at Robert Mann Gallery, Food For Thought: A Group Exhibition in New York from March 31 – May 14, 2011. Marco Ugolini

Dark Ages From Wikipedia, the free encyclopedia Dark Ages may refer to: In history and sociology[edit] In astrophysics[edit] A private social network, just for you and your sweetie The Korean entrepreneurs behind Between have a charming idea: Let couples create one-on-one social networks for purely private sharing. With the app, from South Korea-based VCNC, two people can connect with each another to share private photos and secret messages. The private “chat” function includes support for emoticons, so you can dress up your sweet nothings with as many smiley faces, winks, and hearts as your sweetie can stand. In the future, the network could support coupons or other offers, enabling marketers to reach the desireable demographic of young, happy couples in search of romantic experiences and adventures. “We want to build a global couple platform,” VCNC’s chief executive Jaeuk Park told VentureBeat. Between launched on March 7 at the Launch conference in San Francisco.