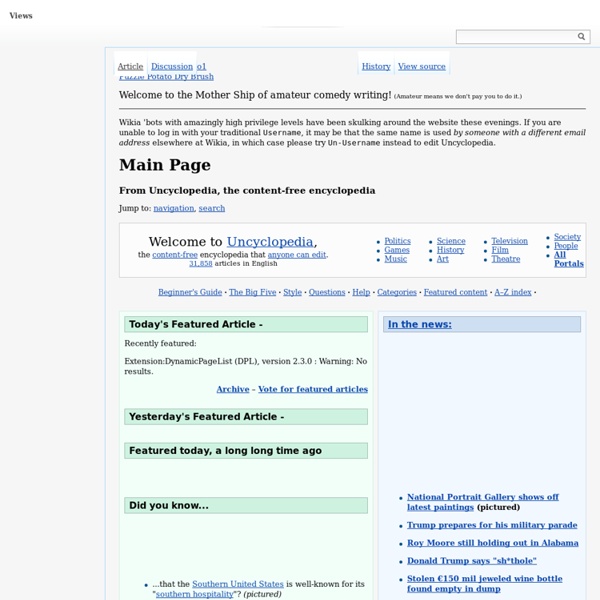 Today's Featured Article - RAF Packington Royal Air Force Station Packington (RAF Packington) is a top secret military establishment in the English County of Staffordshire. It is home to the UK's stockpile of Weapons of Mass Distraction (WMDs). Packington is currently under the steely command of Group Captain Johnny "Nimrod" Hunter-Harrier DFC JPA QDJM. RAF Packington started off in 1826 as a pork-and-mustard factory run by local pink industrialist Jeremiah Gottmein-Himmel, who leased the site to the burgeoning Royal Scottish Air force (RSAF) who needed to establish a grass runway emergency landing strip (GREMLIN) for their aircraft returning from the disastrous First Porridge War against Kent. This saw the permanent loss of SRAF Branston, now Kent International Airport.

How to verify photos and videos on social media networks This image was mistakenly broadcast by one of France’s largest TV channels, France 2. The scene was described as having unfolded in Iran, back in December 2009. A cursory glance reveals a range of details that could allow us to verify its authenticity. Are Iranian police shields the same colour as in this image? Are Tehran’s pavements painted yellow?

Trobriand Islands The Trobriand Islands (today officially known as the Kiriwina Islands) are a 450 km² archipelago of coral atolls off the eastern coast of New Guinea. They are part of the nation of Papua New Guinea and are situated in Milne Bay Province. Most of the population of 12,000 indigenous inhabitants live on the main island of Kiriwina, which is also the location of the government station, Losuia. Other major islands in the group are Kaileuna, Vakuta and Kitava. The group is considered to be an important tropical rainforest ecoregion in need of conservation. Geography[edit]

Russian Alphabet - (Cyrillic Alphabet) - Letter Names Russian alphabet consists of 33 letters divided into 10 vowels, 21 consonants and 2 letters which do not designate any sounds. Each letter can be either capital or small. The letters can also be printed or handwritten. Pronunciation of the Russian Alphabet Click on the play button next to the letter to hear its name pronounced.

Waverly Hills Sanitorium - Historical and Paranormal Site Starting Thursday January 2, 2014 we will begin taking reservations for tours and investigations for 2014! The office will open at 9:00 am Eastern Time. Tours and Investigations begin in March! Call our office for details! This site is the one and only official website for Waverly Hills Sanatorium – owned by Charlie and Tina Mattingly and The Waverly Hills Historical Society. Tips/ Rules When Confronted By The Police If you have a confrontation with the police - know your rights and know what you should or should not do to give them up. Just follow these 10 rules: 1.

Identify a Lie with 6 Simple Questions post written by: Marc Chernoff Email We all fall victim to at least a few lies during the course of our lifetime. Some lies may be extremely troublesome to our personal wellbeing, while other “white lies” may be far more innocuous. About Us Who is TrueCompanion.com: TrueCompanion.com is comprised of a collection of very skilled artists and engineers that have designed the world’s first sex robot. Our caring staff deliver to you the specific sex robot which best meets your specific requirements. Your TrueCompanion.com robot will deliver the ultimate in robot sex. Your sex robot will also be able to talk, listen, carry on a conversation, feel your touch and be your true friend. They can also have an orgasm when you touch them! The True Size Of Africa Brilliant infographic from Kai Krause (perhaps the Kai Krause?) to combat rampant ‘immappancy’ (Now corrected for map projection errors by marauding carto-nerds – thanks Manuela Schmidt)

Wild Mood Swings - Surf the web on a whim. (C) Sean McManus <p style="font-size:x-large;">Oh no! You don't have Javascript enabled. Please <a href=" Javascript now</a> or the only moods you'll experience will be boredom and frustration.</p><hr noshade>