Last week, Pokemon Black and White were finally released in America as the two latest installments of the long-running video game franchise. 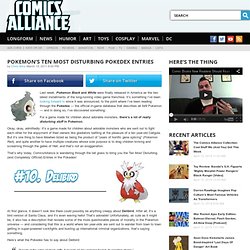 It’s something I’ve been looking forward to since it was announced, to the point where I’ve been reading through the Pokedex — the official in-game database that describes all 649 Pokemon — and in doing so, I’ve discovered something: For a game made for children about adorable monsters, there’s a lot of really disturbing stuff in Pokemon. Okay, okay, admittedly: It’s a game made for children about adorable monsters who are sent out to fight each other for the enjoyment of their owners like gladiators battling at the pleasure of a ten year-old Caligula.

But it’s one thing to have Mewtwo listed as being the product of “years of horrific gene splicing” (Pokemon Red), and quite another to have multiple creatures whose sole purpose is to drag children kicking and screaming through the gates of Hell, and that’s not an exaggeration. Guys. Yeesh. Twitter Parodies: 9 Top Literary Fakes. It might be considered surprising that a platform that limits its users to 140 characters has so many literary-themed accounts. 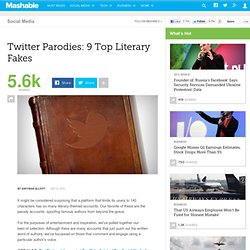 Our favorite of these are the parody accounts, spoofing famous authors from beyond the grave. For the purposes of entertainment and inspiration, we've pulled together our best-of selection. Although there are many accounts that just push out the written word of authors, we've focussed on those that comment and engage using a particular author's voice. SEE ALSO: Top Fictional Accounts | Top Fake Celebs | Top Social Media & Tech Spoofs Take a look through the slideshow below for our favorites and suggest in the comments any we've missed. [UPDATE: Thanks for all the suggestions — we've added in Oliver Goldsmith as our tenth Tweeter.] Image courtesy of iStockphoto, joecicak. 6672.jpg (JPEG Image, 472x683 pixels) Uncyclopedia. The End of the Internet. Why the OLD Web Is Dying and Where YOU Need to Look Next Before YOU and Your Business are EXTINCT Inside this complimentary, ground-breaking PDF report, futurists and master marketing strategist Ryan Deiss reveals: The 3 giant companies who are KILLING online "mom and pops" (like YOU!) 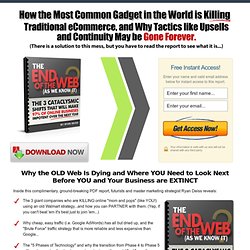 Dear Dad. LMyLife.com - Because life is awesome. Fotoshop by Adobe: Parody Product Is Going To Make You Look Awesome. SO M3TAL: My First Hardcore Song. To Do List. Hide Your Kids, Hide Your Wi-Fi: Mashable's Favorite Wi-Fi Names. In honor of Wi-Fi Day Tuesday — 8.02.11 — Mashable asked our community to tell us about the best Wi-Fi network names they've seen. 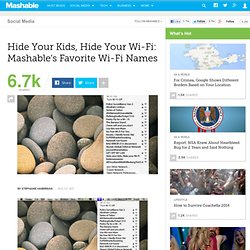 We received a staggering number of responses. Submissions ranged from jeers at people stealing Internet, pop culture references (it seems our community loves Arrested Development and The Offspring), pranks and the occasional obscenity. Here are some of our favorites (click here to see the rest): Police Surveillance Van 2Hide Your Kids, Hide Your Wi-FiUse This One MomAbraham LinksysSeries of Tubes404NetworkUnavailablePlzBringVodkaToApt1310Pretty Fly for a Wi - FiBluth Model HotelThe Banana StandI have Wi-Fi and You Don'tRouter? I Hardly Know HerNo Free Wi-Fi for YouFree VirusSUPERThanksForAskingNetwork Not FoundBAD ERROR 313: disconnectSkyNet Global Defense NetworkGET OFF MY LANAllYourBandWidthRbelongToUSlookmanowires. 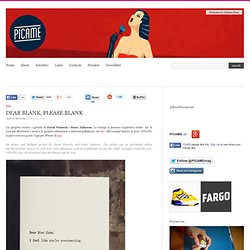 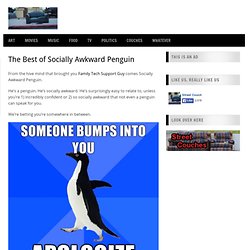 He’s a penguin. He’s socially awkward. He’s surprisingly easy to relate to, unless you’re 1) incredibly confident or 2) so socially awkward that not even a penguin can speak for you. We’re betting you’re somewhere in between. Awkward Stock Photos. "Honest Food Prep Instructions" by Chase Mitchell on CollegeHumor.