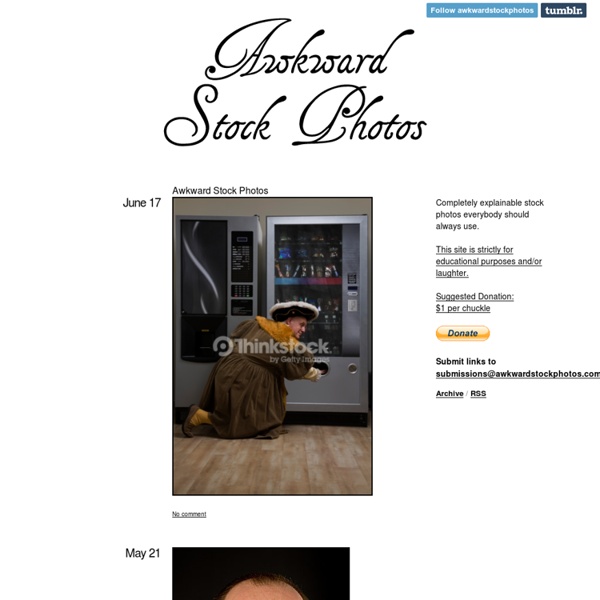 13 Most Awkward Stock Photos Most people only see stock images that have actually been purchased to illustrate some kind of idea or feeling, but the people who make stock images work to ensure there is an image out there for just about any conceivable notion. As a result, there are a lot of seriously strange stock photos with no apparent use other than humoring people, check out some of the funniest images collected at this hilarious blog called Awkward Stock Photos ( Via Neatorama ). There's nothing like a relaxing, almost orgasmic experience than spending your evening with a cactus, if I do say so myself. She's either having too much fun with her cosmetic surgery, or she's a funky mummy. This is quite different from the gifts my dog leaves for me. I bet this is not a Kamasutra position. Sweet dreams. Stock women models are really crazy. Frontpage of the most successful "dating for seniors" website. Totally random arm hanging from the rafters, WTF? Found thanks to Jill Harness' post at Neatorama.

Winter Wallpaper from the Fox Foundation One-Time Monthly In Tribute Team Fox Tweet HOME › Our Role & Impact › FoxFeed Blog The latest reporting and analysis on breakthroughs in Parkinson's research and issues that matter most to you. National Institutes of Health Receives $3 Billion Spending Boost March 22, 2018 The spending deal was released last night and the bill must be passed by this Friday, March 23. New $6 Million Program Looks at Causes of Parkinson's The Michael J. Ask the MD: Parkinson's Diagnosis and Biomarkers In the latest "Ask the MD" video, Dr. Senator Cory Booker (D-NJ) Tells PD Advocates: 'What You Do Matters' March 21, 2018 Senator Booker gave a keynote speech to nearly 300 advocates in Washington, D.C. for the 2018 Parkinson's Policy Forum. Collaboration Most Ambitious Initiative toward a Cure March 20, 2018 The Lancet Neurology calls the AMP PD program the "most ambitious initiative so far to find a cure for Parkinson's." Pharma Company Buys Up MJFF-funded Biotech and Motor Symptom Therapy March 19, 2018 March 14, 2018 Dr.

theCHIVE 10 Photos Capturing Moments of Spontaneous Badassery It's easy to look badass with careful planning: Whether it's entering a prize fight, acting in intense action scenes with the benefit of careful choreography or just waiting for the crowd to gather before you jump your dirt bike over 16 flaming tigers, the common thread is always planning and forethought. It's a lot harder to come off as a total badass in the heat of the moment, with no warning, no setup and no pretense. Hard, but not impossible: Mildly Amused Riot Guy Clearly, there is some serious shit going down in the foreground of this photo: an altercation, an argument, a dramatic scene or a hurried arrest. New in Men's Fashion: Rocket Launchers A good fashion sense is nothing if you don't know how to accessorize. P-probably you. Fake! Yeah, there. Disappointing Fire Tornado Image thanks to Mezrin And here we have an angry old testament God practicing his fireballs. He is, if anything, a bit disappointed. Epic Beard Rescue Squad, Go!

Grandma's Superhero Therapy (18 photos) A few years ago, French photographer Sacha Goldberger found his 91-year-old Hungarian grandmother Frederika feeling lonely and depressed. To cheer her up, he suggested that they shoot a series of outrageous photographs in unusual costumes, poses, and locations. Grandma reluctantly agreed, but once they got rolling, she couldn't stop smiling. Frederika was born in Budapest 20 years before World War II. During the war, at the peril of her own life, she courageously saved the lives of ten people. Aside from great strength, Frederika has an incredible sense of humor, one that defies time and misfortune. With the unexpected success of this series, titled "Mamika" (or grandma in Hungarian), Goldberger created a MySpace page for her. Initially, she did not understand why all these people wrote to congratulate her. We got in touch with Sacha Goldberger, the grandson and talented photographer to ask him more about his background and creative process. Update: This post has gone viral.

11 Deep Space Photos You Won't Believe Aren't Photoshopped It's hard to overstate the excitement back in 1990 when the Hubble Space Telescope left Earth. Scientists had worked the public into a frenzy with this thing since the 1970s, promising that without the stupid atmosphere to hold it back, its vision would be so clear, you could peer right into the butthole of God. So we didn't have a problem when it blew past its $400 million budget and landed at $1.5 billion, because that first picture would be worth every penny. What we got was this piece of shit: Via Wikipedia It was a problem with a mirror, and it was fixed with a simple three-year replacement project. #11. Via Spacetelescope.org Known in the scientific community by its more poetic name of ARP 273, this is an image of two galaxies caught in a gravitational clusterfuck after the smaller one passed through the larger one. #10. Via Spacetelescope.org How detailed is it? Now, let's view just that miniscule selection at the original image's full size: #9. Via Spacetelescope.org Those? #8. #7.

11 Images of Nature You Won't Believe Aren't Photoshopped One thing we've discovered over and over again is that nature is always weirder than what we give it credit for. That's why, for instance, some of the most staggering naturally occurring landscapes on Earth don't look like they belong on Earth at all. They look like they were created in a lab, or beamed down to our world from a distant fold in the universe. Tell us you wouldn't think you'd been kidnapped by aliens if one day you woke up to see ... #11. That soon-to-be-eaten-by-a-monster explorer up there has obviously stumbled upon the undead carcass of an alien supercreature, one that crash landed in a cave on our planet millions of years ago. Atlas ObscuraThis must be the teenage alien boy's room. Actually, those are just salt crystals growing in 3N Cave in Iran. 3N is the world's largest salt cave, extending over 7,000 yards. Atlas ObscuraKingdom of the Crystal Spinal Column just doesn't have the same ring to it. #10. #9. The Daily Mail #8. "Ten bucks my tongue won't stick to it." #7.