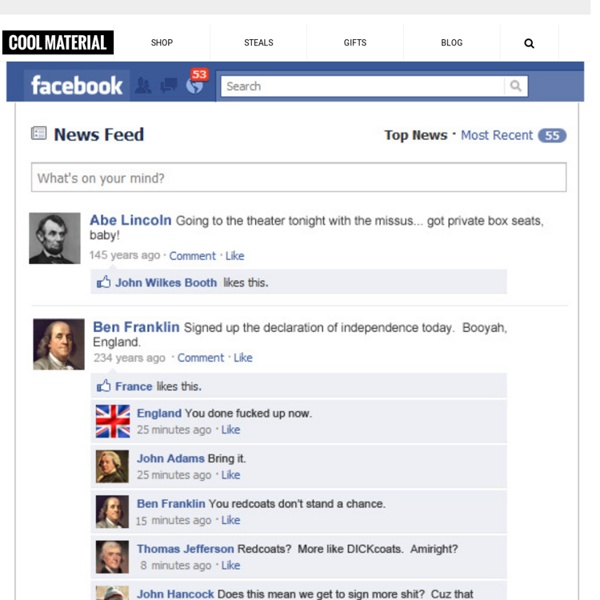 Things Ruined By Kids If you have kids, chances are they probably ruined some of your stuff by now. If you don’t have kids, this collection of pictures and stories from around the net will help you remember to wear a rubber. Permanent marker, Clearasil zit cream, and nail polish. Weâ€™re so proud. Clover the dog meets a permanent marker. This is why I will probably never buy a new car again. Anti Joke What are Antijokes? Anti Jokes (or Anti Humor) is a type of comedy in which the uses is set up to expect a typical joke setup however the joke ends with such anticlimax that it becomes funny in its own right. The lack of punchline is the punchline. We’ve just released huge update to the iOS app!

Still life: Bent objects » Article » OWNI.eu, Digital Journalism UPDATE: The Return of Bent Objects Wires transform these objects from inanimate to hilarious works of art. Little polish girl McDonalds as Sculpture Materials How to be a Hipster Hipster is a slang term that first appeared in the 1940s, and was revived in the 1990's and 2000's to describe types of young, recently settled urban middle class adults and older teenagers with interests in non-mainstream fashion and culture, particularly indie-rock, independent film, magazines such as Vice and Clash, and websites like Pitchfork Media.[1] In some contexts, hipsters are also referred to as scenesters. Do you want to be a Hipster? Do you wish you could join those sparkling beautiful people that you see pedaling past your house? Well, throw your TV's away, buy yourself a sturdy canvas bag, talk about joining the Peace Corp and read this short guide on becoming what you've always dreamed of: A Hipster. There's an art to finding acceptable Hipster clothing.

Pop Icons In Another Light Part 2 (PICS 22 Jul These images were gathered from all over the internets but it has come to our attention that a few of them can be purchased as shirts from various sites. If you’re looking to find some terrific t-shirts (beyond just what you may see here as well) visit Threadless , Shirt Woot! , Tee Fury and Glennz Tees . Check out Part 1 in this series here and Part 3 here . 32 Pictures To Help You Appreciate The Awesomeness Of Nature October 12, 2010 | 136 Comments » | Topics: Awesome, Nature Hot Stories From Around The Web Other Awesome Stories

Stuffed Animals with Mental Disorders German toymaker Paraplush has released a line of cute stuffed animals that suffer from different mental illnesses. Depressed Turtle Being an animal accustomed to a more relaxed pace, life in the fast lane has caught up with Dub, sending him into a severe depression. Sheep with Multiple Personality Disorder Dolly seems to suffer from the delusion that she is a wolf despite the fact that she is without a doubt a sheep. Hallucinating Snake