Multithreaded programming - theory and practice. Klingon Programmers. Primate Programming(tm) Inc. Sh*t Project Managers Say. Just Fucking Google It. Escalation of the War Between Developers, Designers and Project Managers…with QA! Stupid Interview Questions. The Vendor Client Relationship In Real World Situations. Start.sbastn. Behold! The Battle for Java Earth. The geeks here at DZone (I count myself among them) were discussing the recent round of heat that Oracle has been taking in the press and the blogosphere. 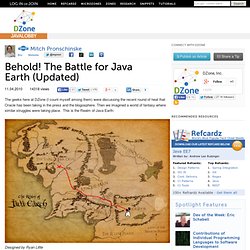 Then we imagined a world of fantasy where similar struggles were taking place. This is the Realm of Java Earth: Designed by Ryan Little LPoD: Larry Prince of Darkness (aka. Gosling the GreyHe is a guide for the Java Devs of the Shire and he understands the dark ways of large, greedy kingdoms better than any other. How to spot a tester in a... Cartoon Tester Sunday, 24 January 2010 How to spot a tester in a... 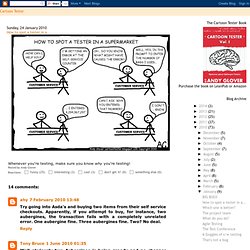 Whenever you're testing, make sure you know why you're testing! Posted by Andy Glover 14 comments: ahy7 February 2010 13:48Try going into Asda's and buying two items from their self service checkouts. Load more... Newer PostOlder PostHome Subscribe to: Post Comments (Atom) The Cartoon Tester Book Purchase the book on LeanPub or Amazon Blog Archive Something about me Andy Glover I'm a tester, I test, some days I enjoy testing. View my complete profile. Who’s Suing Whom In The Telecoms Trade? See the image on its own Hangbags away boys! 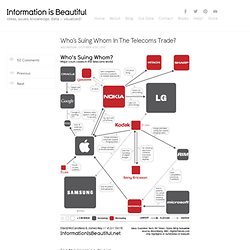 Who’s suing whom in the telecoms trade? Based on these diagrams from Guardian Tech and the NY Times. I thought those charts generated more questions than they answered. So, as ever, I tried to answer the obvious questions and convey various contexts simultaneously. If Operating Systems Ran The Airlines... Zyra's front page //// Operating Systems //// Linux //// Airlines //// Site Index Different operating systems. 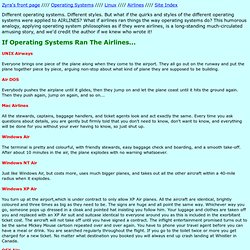 Different styles. But what if the quirks and styles of the different operating systems were applied to AIRLINES? What if airlines ran things the way operating systems do? This humorous analogy, applying operating system philosophies as if they were airlines, is a long-standing much-circulated amusing story, and we'd credit the author if we knew who wrote it! If Programming Languages ran the Airlines... Funny Unix and Linux Quotes. Hey there, Beginning another weekend of work (following a week of work, of course ;) I thought I'd inject some more humor into this blog (since I seem to be needing it more and more). 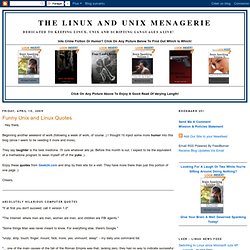 They say laughter is the best medicine. I'll cure whatever ails ya. Before this month is out, I expect to be the equivalent of a methadone program to wean myself off of the yuks ;) Enjoy these quotes from Geek24.com and drop by their site for a visit. Cheers, "If at first you don't succeed; call it version 1.0" "The Internet: where men are men, women are men, and children are FBI agents.

" "Some things Man was never meant to know. "unzip; strip; touch; finger; mount; fsck; more; yes; unmount; sleep" - my daily unix command list "... one of the main causes of the fall of the Roman Empire was that, lacking zero, they had no way to indicate successful termination of their C programs. " - Robert Firth "If Python is executable pseudocode, then perl is executable line noise. " AGILE IN ACTION: Don't break the build.

Is this software project doomed? 10 Ways To Suck At Programming. I recently inherited a web app from a dirty, nasty, stinking contractor that claimed to be a competent enough programmer to be left alone to get things done. 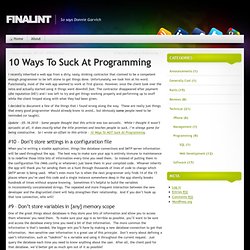 Unfortunately, we took him at his word. Functionally, most of the web app seemed to work at first glance. However, once the client took over the reins and actually started using it things went downhill fast. The contractor disappeared after payment (die reputation DIE!) And I was left to try and get things working properly and performing up to snuff while the client limped along with what they had been given. I decided to document a few of the things that I found wrong along the way. Update – 05.18.2010 – Some people thought that this article was too sarcastic. . #10 – Don’t store settings in a configuration file When you’re writing a sizable application, things like database connections and SMTP server information will be used throughout the app. 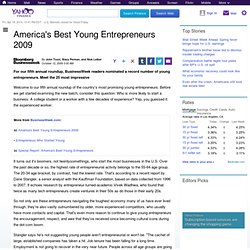 Meet the 25 most impressive Welcome to our fifth annual roundup of the country's most promising young entrepreneurs. Before we get started examining the new batch, consider this question: Who is more likely to start a business: A college student or a worker with a few decades of experience? Yep, you guessed it: the experienced worker. It turns out it's boomers, not twentysomethings, who start the most businesses in the U.S. Zone 2010.