5 Things You Won't Believe Aren't In the Bible. The image of an angel is so recognizable that you can immediately spot one if somebody makes its shape in some snow. 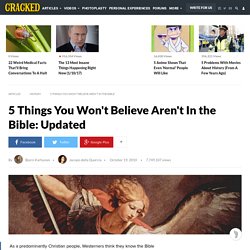 They're sparkly people with two white wings and occasionally swords, who sit on clouds ripping out awesome harp solos while protecting humans from harm. So basically, the protagonists of the next Stephenie Meyer novel. 5 Miracles Deleted From the Bible For Being Too Awesome. You probably already know that the Bible you have on your lap as you fact-check Cracked articles has been heavily edited. 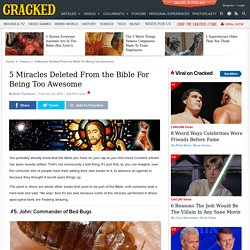 That's not necessarily a bad thing, it's just that, as you can imagine, over the centuries lots of people have tried adding their own books to it, to advance an agenda or because they thought it would spice things up. The point is, there are whole other books that used to be part of the Bible, until someone took a hard look and said, "No way. " And it's too bad, because some of the miracles performed in these apocryphal texts are freaking amazing. #5. John: Commander of Bed Bugs. 5 Shocking Scenes You Won't Believe Are in the Bible. It seems like for every person who has sat down and studied the Christian Bible cover to cover, there are several hundred who know only what they picked up from half-remembered Sunday school lessons and that Mel Gibson movie. 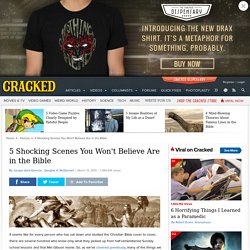 So, as we've covered previously, many of the things we think came straight out of the Bible actually aren't mentioned in there at all. But if many of the most iconic features of Christianity aren't taking up space in the holy book, it makes one wonder just what, in fact, is in there. Well, for starters, there's ... #5.

God Getting into a Wrestling Match With a Man (and Tapping Out) Stockbyte/Stockbyte/Getty Images. The 9 Most Badass Bible Verses. #3. 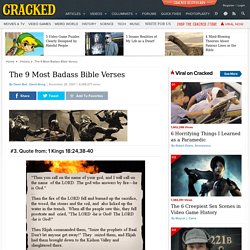 Quote from: 1 Kings 18:24,38-40 That is how they used to do religious debates back in the day. The situation was that people of Israel had taken to Baal worship, a faith that added a lot of whores to its rituals and thus gained immediate popularity. 6 Filthy Jokes You Won't Believe Are from the Bible. Statistically speaking, about 80 percent of you are either Christian or Jewish, and about 80 percent of you haven't read the Bible. 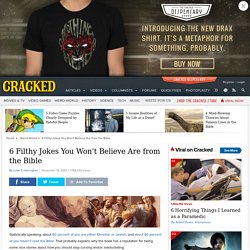 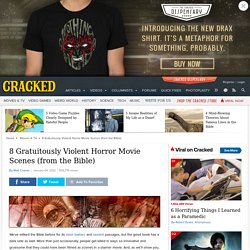 More than just occasionally, people get killed in ways so innovative and gruesome that they could have been filmed as scenes in a slasher movie. And, as we'll show you, some have done exactly that. #8. The Guy Getting Impaled on a 75-Foot Pole (Esther 7:9-10) 5 Bible Stories Ripped Off From Greek Mythology. Pretty much every story is a rip off of something else. 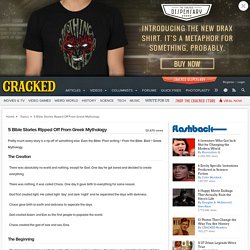 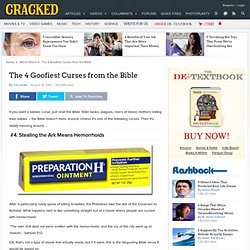 Killer bears, plagues, rivers of blood, mothers eating their babies -- the Bible doesn't mess around. Unless it's one of the following curses. Then it's totally messing around ... #4. Stealing the Ark Means Hemorrhoids. 5 Insane Lessons from My Christian Fundamentalist Childhood. My name is Hannah Ettinger, and I was raised in the Quiverfull movement. 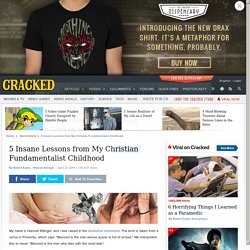 The term is taken from a verse in Proverbs, which says: "Blessed is the man whose quiver is full of arrows. " We interpreted this to mean: "Blessed is the man who dies with the most kids. " In the Quiverfull movement, children are pretty much metaphorical weapons born to shoot a degenerate modern society in the face. The 6 Raunchiest, Most Depraved Sex Acts (From the Bible) What happens when you take a really skanky sex story and dress it up in a lot of flowery words? 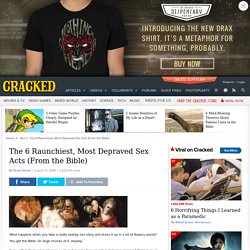 Just The Facts. 6 Insane Cults (That Would Probably Be a Lot of Fun) Politics, sex and religion are the three things you're not supposed to discuss in mixed company. Fortunately, if you're in a cult, odds are you get to discuss those topics as much as you want. In the right cults you probably get to discuss them while having group sex. If you're allowed to speak, that is. #6. 10 Things Christians and Atheists Can (And Must) Agree On. The war that's coming between the fundamentalist Christians and the hard-core Atheists probably won't be the most violent of the holy wars.

But it has the potential to be the most annoying. We'll, I'm going to try to stop it. So I'm running into this guy basically everywhere I go: 4 Things Both Atheists and Believers Need to Stop Saying. Getty For a moment, take a step back and forget all the ideas that come to mind when you hear the word "God. " Forget about organized religion and everything that flows from it. No Jesus or Buddha. No corrupt religious figures abusing their positions to raise money or shelter sin. No holy wars or persecutions based on humanity's flawed understanding of divine intent.

Just a force in the universe, not only more powerful than humanity, but greater than anything we have known. After all, God -- like the Loch Ness Monster or that Canadian girl I lost my virginity to junior year -- can neither be proven nor disproven. GettyHer name was Samantha and she totally exists. But that doesn't stop people. . #4. First off, no one says God hates Ecstasy. Sex And Religion. The root of Religion is sex. 5 Inspiring Religions That Worship Penises. The 5 Most Ridiculously Unjust Religious Afterlives. All of you will die someday (you, not us-we're having our brains frozen) and many of you believe in some kind of afterlife.

Unfortunately, depending on which religion you believe in, you can get totally screwed on Judgment Day based on a number of arbitrary technicalities. 5 People Who Started Religions Just to Get Laid. Cults are full of easy to brainwash weirdos, right? Actually, if you've ever joined a club because everyone else was doing it, or believed a conspiracy theory even for a moment, you're a candidate for cult membership.

4 Idiots Who Show Up Wherever Religion Is Discussed Online. We are prostitutes: Cool World. How To Tell If Your Boss Is A Sociopath. Displays a lack of empathy? Big8atl's post on Vine. Am I In The Illuminati? Russell Brand The Trews (E87)