CatStuff: Strict Rules about Stray Cats. Note: For several months, a version of this article was here, asking that the original author contact me, since I couldn't find her. 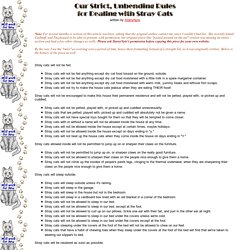 She recently found CatStuff, and I'm pleased to be able to present, with permission, her original piece (the "passed around on the net" version was missing an entire section and had a few other changes as well). Please ask StarryNyte's permission before copying this piece for your own website. Point & Clickbait. 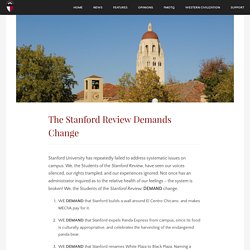 We, the Students of the Stanford Review, have seen our voices silenced, our rights trampled, and our experiences ignored. Not once has an administrator inquired as to the relative health of our feelings – the system is broken! We, the Students of the Stanford Review, DEMAND change. WE DEMAND that Stanford builds a wall around El Centro Chicano, and makes MEChA pay for it.WE DEMAND that Stanford expels Panda Express from campus, since its food is culturally appropriative, and celebrates the harvesting of the endangered panda bear.WE DEMAND that Stanford renames White Plaza to Black Plaza. The Setup Wizard. The New Devil’s Dictionary.

George R.R. Martin reacts to his publisher's comments on 'The Winds of Winter' Last week, Game of Thrones and A Song of Ice and Fire fans erupted after George R.R. 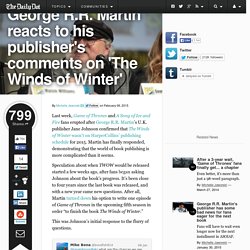 Martin’s U.K. publisher Jane Johnson confirmed that The Winds of Winter wasn't on HarperCollins’ publishing schedule for 2015. Martin has finally responded, demonstrating that the world of book publishing is more complicated than it seems. Speculation about when TWOW would be released started a few weeks ago, after fans began asking Johnson about the book's progress. It’s been close to four years since the last book was released, and with a new year came new questions. Call of Cthulhu: The Musical. “Call of Cthulhu – The Musical” is a melding of Lovecraft and Broadway by Brian Hendrickson. 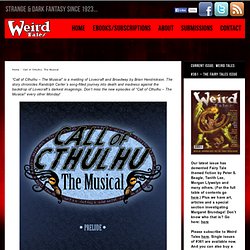 The story chronicles Randolph Carter’s song-filled journey into death and madness against the backdrop of Lovecraft’s darkest imaginings. Don’t miss the new episodes of “Call of Cthulhu – The Musical” every other Monday! Click here to continue Brian Hendrickson was a feral child who once roamed the Indiana woodlands. He picked up his one civilized vocation, drawing, at a very young age and successfully resisted all attempts to interest him in other activities such as sports or polite conversation. Countdown 'Til Christmas Is Finally F***ing Over Advent Calendar. THE WORST ROOM. Baptist Jokes. Vast Public Indifference: 101 Ways to Say "Died" Starting today, I'm going to start running a series called "101 Ways to Say Died. 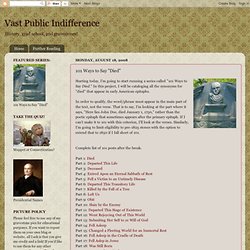 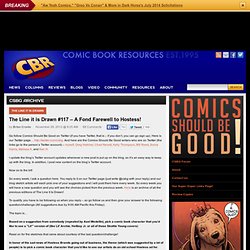 Here is our Twitter page… And here are the Comics Should Be Good writers who are on Twitter (the links go to the person’s Twitter account) – myself, Greg Hatcher, Chad Nevett, Kelly Thompson, Bill Reed, Sonia Harris, Melissa K. and Ken H. I update the blog’s Twitter account updates whenever a new post is put up on the blog, so it’s an easy way to keep up with the blog. In addition, I post new content on the blog’s Twitter account. Now on to the bit! So every week, I ask a question here. To qualify, you have to be following us when you reply – so go follow us and then give your answer to the following question/challenge (All suggestions due by 9:00 AM Pacific this Friday). The topic is… The Story of Mel. This was posted to USENET by its author, Ed Nather (utastro! 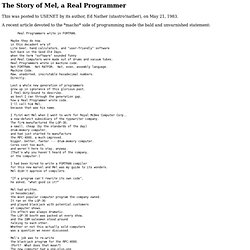 Nather), on May 21, 1983. A recent article devoted to the *macho* side of programming made the bald and unvarnished statement: Real Programmers write in FORTRAN. Maybe they do now, in this decadent era of Lite beer, hand calculators, and "user-friendly" software but back in the Good Old Days, when the term "software" sounded funny and Real Computers were made out of drums and vacuum tubes, Real Programmers wrote in machine code. If The Avengers Used Facebook. The Best Obnoxious Responses To Misspellings On Facebook. Lovecraft and Herge. FDR as a Michael Bay 'Transformers' Hero Offers You a 'New Deal You Can't Refuse'

SPECIAL INSTRUCTIONS TO PLAYERS. [Warning: Extremely Colourful Language Ahead] This incredible memo, purportedly issued to all Major League Baseball teams in 1898 as part of a documented campaign — spearheaded by John Brush — to rid the sport of filthy language, was discovered in 2007 amongst the belongings of the late baseball historian Al Kermish, also a respected collector of memorabilia. 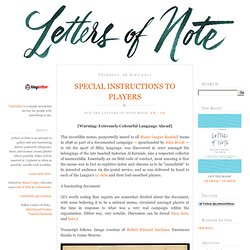 Essentially an on-field code of conduct, most amusing is that the memo was in fact so expletive-laden and obscene as to be "unmailable" to its intended audience via the postal service, and so was delivered by hand to each of the League's 12 clubs and their foul-mouthed players. A fascinating document.

Lolcats 'n' Funny Pictures of Cats - I Can Has Cheezburger?