The Stunning Difference Between Treatment of Men & Women on Reddit. Reddit user Pyyio posted a brilliant illustration of the difference between the way Redditors treat men and women. 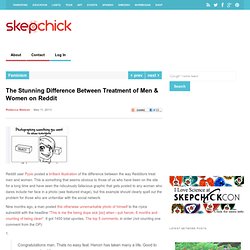 This is something that seems obvious to those of us who have been on the site for a long time and have seen the ridiculously fallacious graphic that gets posted to any woman who dares include her face in a photo (see featured image), but this example should clearly spell out the problem for those who are unfamiliar with the social network. Nine months ago, a man posted this otherwise unremarkable photo of himself to the r/pics subreddit with the headline “This is me the being dope sick [sic] when i quit heroin. 6 months and counting of being clean“.

It got 1450 total upvotes. The top 5 comments, in order (not counting one comment from the OP): Congratulations man. 15 Rape Jokes That Work « Kate Harding. Lindy West, Jessica Valenti, and Jonnie Marbles have already written everything I would have to say, and quite a bit more, about the latest Daniel Tosh rape joke controversy. 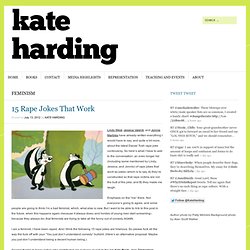 So here’s what I have to add to the conversation: an even longer list (including some mentioned by Lindy, Jessica, and Jonnie) of rape jokes that work as jokes–which is to say, A) they’re constructed so that rape victims are not the butt of the joke, and B) they made me laugh. Emphasis on the “me” there. Not everyone’s going to agree, and some people are going to think I’m a bad feminist, which, what else is new. But I want to be able to link to this post in the future, when this happens again–because it always does–and hordes of young men start screaming–because they always do–that feminists are trying to take all the funny out of comedy AGAIN. 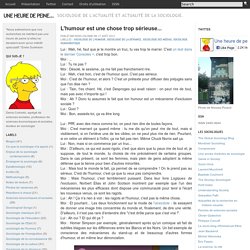 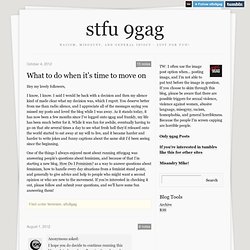 I said I would be back with a decision and then my silence kind of made clear what my decision was, which I regret. You deserve better from me than radio silence, and I appreciate all of the messages saying you missed my posts and loved the blog while I was away. As it stands today, it has now been a few months since I’ve logged onto 9gag and frankly, my life has been much better for it. Why Rape Jokes are never OK. By Shaker Time-Machine, a feminist, fat acceptance advocate, ginormous Doctor Who fan, film student, and terribly busy intern living in LA and trying feverishly to graduate. 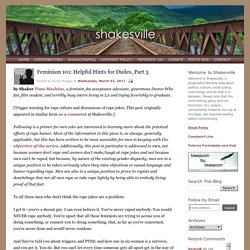 [Trigger warning for rape culture and discussions of rape jokes. This post originally appeared in similar form as a comment at Shakesville.] Following is a primer for men who are interested in learning more about the practical effects of rape humor. Most of the information in this piece is, as always, generally applicable, but this has been written to be most accessible for men in keeping with the objective of the series.

Sexist Humor No Laughing Matter, Psychologist Says-Mozilla Firefox. A research project led by a Western Carolina University psychology professor indicates that jokes about blondes and women drivers are not just harmless fun and games; instead, exposure to sexist humor can lead to toleration of hostile feelings and discrimination against women. 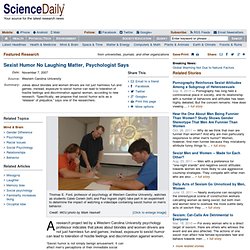 “Sexist humor is not simply benign amusement. It can affect men’s perceptions of their immediate social surroundings and allow them to feel comfortable with behavioral expressions of sexism without the fear of disapproval of their peers,” said Thomas E. Ford, a new faculty member in the psychology department at WCU. “Specifically, we propose that sexist humor acts as a ‘releaser’ of prejudice.” In their research article*, Ford and the graduate student co-authors describe two research projects designed to test the theory that “disparagement humor” has negative social consequences and plays an important role in shaping social interaction. How we react to people who say rape jokes aren't funny - Shameless Magazine - your daily dose of fresh feminism for girls and trans youth.

In the Blog Trigger warning: this post contains mentions of rape. 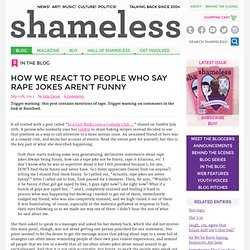 Trigger warning on comments in the link at Buzzfeed. It all started with a post called “So a Girl Walks into a Comedy Club….” shared on Tumblr July 10th. A person who normally uses her tumblr to share baking recipes instead decided to use that platform as a way to call attention to a more serious issue. An unnamed friend of hers was at a comedy club, and wrote her account of events.