Remember the minister who wanted you to donate so he could get a G650? Guy Who Lives Near Airport Painted "Welcome to Cleveland" on His Roof, He Lives in Milwaukee: The Q: GQ. Photo: Michael Sears/Milwaukee Journal Sentinel This guy is a legend. 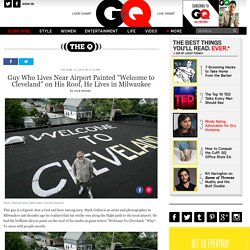 Just a God and hero among men. Mark Gubin is an artist and photographer in Milwaukee and decades ago he realized that his studio was along the flight path to the local airport. The World's Worst Battery. Ryan H. wrote, "Found this RAM on Rakuten. 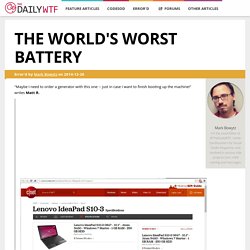 Something tells me it's for Charles Babbage's computer, not a ThinkServer. " "I was looking for some information about Powershell," Louise H. writes, "Apparently, 556 out of 1153 rated this helpful. My guess is these 556 were looking for 'Body insertion'. " "We are currently in the process of creating an upgrade script after major database changes," wrote Tobias, "It's actually so much data that it just gives up on 'nothing'.

" "According to this Amazon listing, it looks like I've been thinking about photography all wrong," John S. writes. The Shadow Over ShipPoint. 10 Top Tips For PRs Considering Whether To Phone The Register. Getting ahead of the compliance curve. 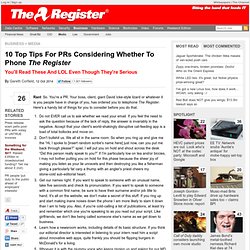 "Hitchhiker's Guide To The Galaxy" Quotes As Motivational Posters. Schrödinger's Attendee and more Best of Emails. 99% of terrible emails are just that. 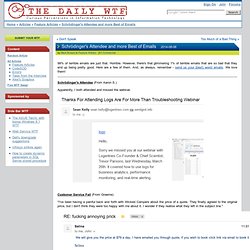 The Joys of Interdisciplinary Work. Lisa thought that the Modesto Biology Institute was the perfect working environment. 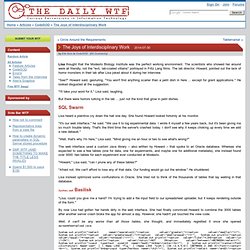 The scientists who showed her around were all friendly, not the "evil, lab-coated villains" portrayed in Fritz Lang films. A Priestly Epoch, Running off the Tracts. Peter came across this helpful little utility function: public static DateTime EPOCH_UTC() { DateTime epoch = new DateTime(1980, 1, 1, 0, 0, 0); return epoch; } 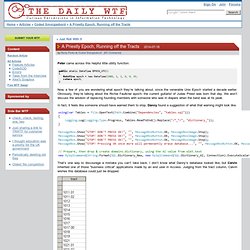 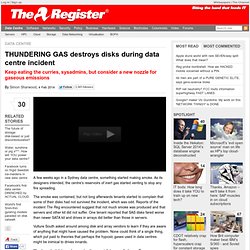 As its designers intended, the centre's reservoirs of inert gas started venting to stop any fire spreading. The smoke was contained, but not long afterwards tenants started to complain that some of their disks had not survived the incident, which was odd. Recursive Recruiting. After being burned by The Old Switch n’ Bait, RJ was at his wit’s end with the recruiting firm his company forced him to use. 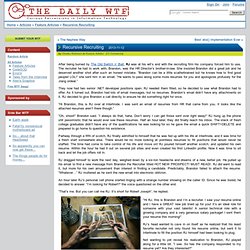 The recruiter he had to work with, Brandon, was the HR Director’s brother-in-law. Man breaks into Gordonvale police station after row with girlfriend wanting to be locked up. Dad and son on fraud charges in relation to buried ute. AWS' Glacier and RedShift creep into to Australia. Amazon Web Services' (AWS') Glacier data deep freeze* is now available in the cloudy company's Australian region. 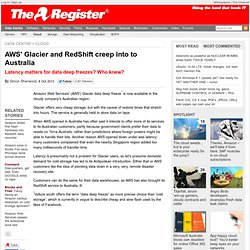 Glacier offers very cheap storage, but with the caveat of restore times that stretch into hours. The service is generally held to store data on tape. When AWS opened in Australia has often said it intends to offer more of its services to its Australian customers, partly because government clients prefer their data to reside on Terra Australis, rather than jurisdictions where foreign powers might be able to handle their bits. Another reason AWS opened down under was latency: many customers complained that even the nearby Singapore region added too many milliseconds of transfer time. Air mattress blast blows German man across room. High performance access to file storage A German chap who attempted fix a leaking inflatable mattress with "industrial strength" puncture repair spray prompted an industrial strength blast which caused €150,000 (£129,000; $200,600) worth of damage to his rented gaff. 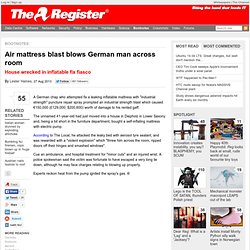 The unnamed 41-year-old had just moved into a house in Diepholz in Lower Saxony and, being a bit short in the furniture department, bought a self-inflating mattress with electric pump. Comic strip for 08/21. Comic strip for 08/14. Flashing warning lights to be installed at three Cairns schools. Norway PM Jens Stoltenberg works as secret taxi driver. 11 August 2013Last updated at 11:34 ET Mr Stoltenberg said it was the first time he had driven for eight years Norwegian PM Jens Stoltenberg spent an afternoon working incognito as a taxi driver in Oslo, he has revealed.

Mr Stoltenberg said he had wanted to hear from real Norwegian voters and that taxis were one of the few places where people shared their true views. What's the difference between JavaScript and Java? Oh So Secret Passwords. Our long-time friend, GRG, is back again, this time with tales of anti security... A very long time ago, he worked at a University Computer Center.

At the time, the school was the proud owner of two huge, hulking mainframes. (The faster of the two was big, gray, probably designed by a guy named Seymour, and was the fastest computer in the world for several years!) Unfortunately, the operating system was rather bare-bones. Sony Offers a "Premium Sound" SD Card For a Premium Price. All hands on deck! Domain controller disaster! :( Dr. Oz will declare on hugely popular TV show that he's being silenced. $10,000 Ethernet cable promises BONKERS MP3 audio experience. Bother! Breakdown busts bloke's bold boffin-blasted briny boat balloon bid.