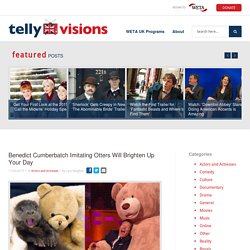 In the past year or so, the Sherlock star has done Shakespeare, read love letters, filmed a new episode of the world’s most popular detective show, gotten cast as the lead in a Marvel movie, been nominated for an Oscar, read a poem for the funeral of a long-dead British monarch, and generally been a great sport about the approximately one million internet memes about him that are going around at any given moment.

The most famous Cumberbatch-related internet phenomenon is probably the whole “Otters Who Look Like Benedict Cumberbatch” thing, which matched photos of otters with Cumberbatch sporting similar facial expressions. It kind of became a thing online, and Cumberbatch has been asked about it before, which is only part of what makes this clip so incredibly awesome. Cumberbatch appeared on BBC One’s The Graham Norton Show last week, along with actor Johnny Depp. Alton Brown reviews Amazon's dumbest kitchen gadgets. Kitchens across America are filled with clutter-inducing demons. 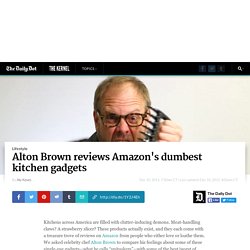 If Mexicans Celebrated The 4th Of July The Way Americans Celebrate Cinco De Mayo. 88 Hilarious Slang Terms From the 20th Century To Sprinkle Through Your Writing Like You're Putting on the Ritz. Writers need slang like bearcats need giggle water, know what I mean? 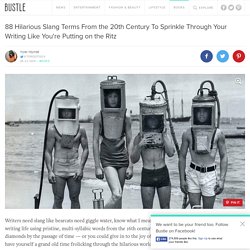 Sure, you could spend the rest of your writing life using pristine, multi-syllabic words from the 16th century that have been honed into Latinate diamonds by the passage of time — or you could give in to the joy of juice joints, Shebas, and spliffication, and have yourself a grand old time frolicking through the hilarious world of American slang. Like fashion or music or poor Congressional choices, slang is a fantastic way to get a sense of another era. As you might expect, Prohibition slang is overflowing with references to speakeasies, flapper babes, and cocktails — not to mention about a million ways to say “I’m drunk.” Marijuana references become more and more popular once the hippies burst onto the scene, ’80s slang is as cheesy as aerobic-wear, and ’90s slang borrows heavily from hip hop (bling-bling, homie, dawg). 1900s 1. 2.

We Asked 12 People To Show Us How They Have Their Dealer Saved In Their Phones. Budapest's Bath Parties Look 10 Times Crazier Than Any Raves Or Clubs In America (Photos) Nightlife• Anthony Selden • When it comes to having fun these days, a lot of people are settling for cheesy EDM shows, mediocre nightclubs and hip-hop concerts but that could just mean a lot of people don’t know how else to have fun. 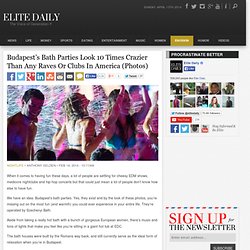 We have an idea: Budapest’s bath parties. Yes, they exist and by the look of these photos, you’re missing out on the most fun (and warmth) you could ever experience in your entire life. They’re operated by Szechenyi Bath. Aside from taking a really hot bath with a bunch of gorgeous European women, there’s music and tons of lights that make you feel like you’re sitting in a giant hot tub at EDC.

The bath houses were built by the Romans way back, and still currently serve as the ideal form of relaxation when you’re in Budapest. They’ve got everything from strobe lights and smoke machines to lasers and a fully stocked bar. Szechenyi Bath features 3 outdoor pools and 15 indoor pools. There are tons of saunas and steam rooms. …And women. Your Scene Sucks: Know Your Stereotype Styles [35 Images]

So how do you dress? 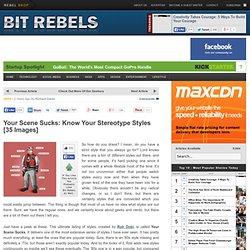 I mean, do you have a strict style that you always go for? Lord knows there are a ton of different styles out there, and for some people, it’s hard picking one since it comes with a whole lifestyle most of the time. 7 Ways to Be Insufferable on Facebook. The memory is vivid. 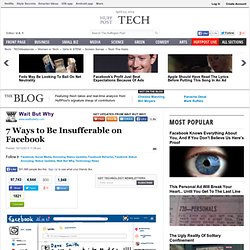 New Year's Day, 2013. I'm going about my afternoon pleasantly, when I open my email and a friend has forwarded me what she calls a particularly heinous Facebook status from her Newsfeed, written by someone we'll call Daniel. It read: 2012 was a biggg year for me. I left my amazing job at NBC to move back to Chicago. By the time I finished reading, I realized that my non-phone hand was clutching tightly to my forehead, forcefully scrunching my forehead skin together.

It was everything bad about everything, all at once. But instead of distancing myself from the horror, I soaked in it. It made me think about what makes terrible Facebook behavior terrible, and why other Facebook behavior isn't annoying at all. Professional Sports Is Very Interesting. Have you ever noticed how interesting professional sports is? 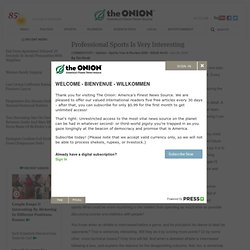 If there's one topic that I enjoy spending hours thinking about and ruminating upon, that is it. Every match or round or game is an endless source of deep and satisfying contemplation. I never tire of watching a player rounding the bases, crossing the threshold into the end zone, or beating another professional athlete into unconsciousness, and then obsessively dissecting and analyzing every detail. A night spent speculating on the outcome of a sporting event—Will the first team win? Or will it be the second? 59 More Slang Phrases From The 1920s We Should Start Using Again. I learned a couple things from the response to my article on slang phrases from the 1920s. 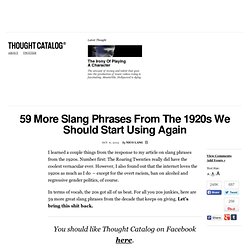