Randommization.com - StumbleUpon. Overheard On The Tube. The 21 things you never thought you'd hear on the tube... 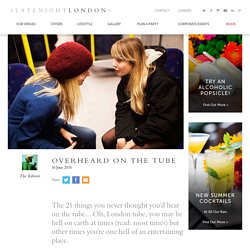 Oh, London tube, you may be hell on earth at times (read: most times) but other times you're one hell of an entertaining place. 1 - "So he said to me, can you read Chinese? And I said, no, I'm Japanese! You'd think he know that, we been together six months! " 2 - Judging by his appearance and the sound of his cough, I can only assume the man next to me on the central line for 20 minutes had the plague.

Not contagious is it? 3 - "It's something vegetarians eat that doesn't have any flavour at all. Woman explaining tofu to her children. 4 - "I was wiping my bum for so long this morning. " 5 - Oh I do love a backpack. 6 - "I bang one out a lot. They were talking about workouts at the gym...but, you know, I still laughed. 7 - "Vancouver is my favourite city in the world. 8 - Oh dear, Sir, you seem to have confused my back with some kind of newspaper rest, put there to facilitate your reading during rush hour. Pause. "Right? " "It's 9.40. 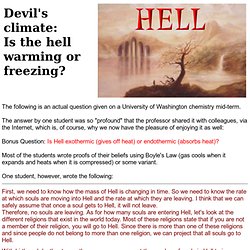 The answer by one student was so "profound" that the professor shared it with colleagues, via the Internet, which is, of course, why we now have the pleasure of enjoying it as well: Bonus Question: Is Hell exothermic (gives off heat) or endothermic (absorbs heat)? Most of the students wrote proofs of their beliefs using Boyle's Law (gas cools when it expands and heats when it is compressed) or some variant. One student, however, wrote the following: First, we need to know how the mass of Hell is changing in time. With birth and death rates as they are, we can expect the number of souls in Hell to increase exponentially. Now, we look at the rate of change of the volume in Hell because Boyle's Law states that in order for the temperature and pressure in Hell to stay the same, the volume of Hell has to expand proportionately as souls are added. 1. 2.

So which is it? Thanks for Jean Heinen for submitting! 21 Ways to Drive Someone Crazy. Has anyone actually noticed this? 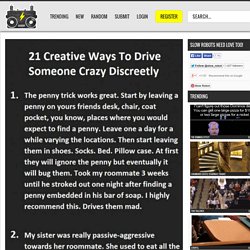 SCORE 168 om nom nom. SCORE 183. The saddest thing I've ever heard on an airplane. All artwork and content on this site is Copyright © 2015 Matthew Inman. 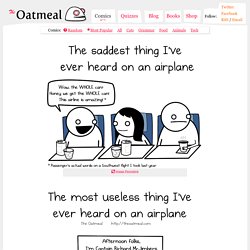 15 of the Most Perfect, Destined Encounters Ever...This Was Meant to Be. 32 Of The Greatest Things That Have Ever Happened On Tumblr. Greatest Mindfuck Ever.