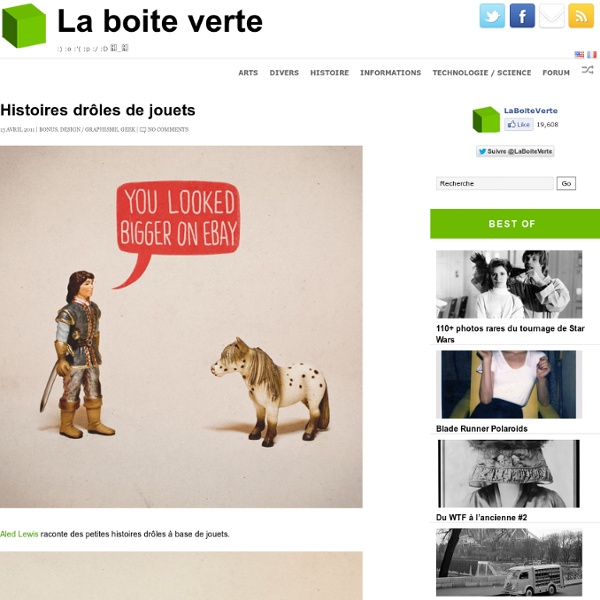 How to Celebrate Towel Day Edited by Zack, Ben Rubenstein, Atomic Number 62, Webster and 16 others Douglas Adams, creator of the Hitchhiker's Guide to the Galaxy series, stated in his tome, "Never go anywhere without your towel." On May 14, 2001, one of his fans, D. Hide Your Kids, Hide Your Wi-Fi: Mashable's Favorite Wi-Fi Names In honor of Wi-Fi Day Tuesday — 8.02.11 — Mashable asked our community to tell us about the best Wi-Fi network names they've seen. We received a staggering number of responses. Submissions ranged from jeers at people stealing Internet, pop culture references (it seems our community loves Arrested Development and The Offspring), pranks and the occasional obscenity. Most Amazing Miniature Food Artworks by Shay Aaron Shay Aaron is a brilliant artist from Israel who makes the most astonishing miniature food jewelry. These foodstuffs look so beautiful that we would desire to eat them. Actually, there’s a whole market out there for miniature food. Not actual stuff you can eat, but beautifully hand made designs of steaks, burgers, pies, vegetables, eggs and pretty much food artworks you can think of.

photography by Angus R Shamal - StumbleUpon A selection of some of the most awesome Behind-the-scenes shots I’ve seen from some famous movies. Back when set designs were huge and hand made, when special effects where mechanical and photographic and film stars were risking their lives on the set. source: Ain’t It Cool News. A self portrait of Stanley Kubrick with his daughter, Jack Nicholson and the crew @ the set of The Shining. on the set of Fritz Lang’s Metropolis — the actress inside the Maria robot taking a breather. The Empire Strikes Back – filming the Crawl.

Harmful Viruses Made of Beautiful Glass When glass blower Luke Jerram saw visualizations of viruses and pathogens in the scientific world he noticed one big theme: color. Wondering what effect the artificial color in normal scientific drawings had on our interpretation of these invisibly small forms, he created his own exquisite versions out of his favorite material: blown glass. Covering such well known maladies as AIDS and Swine Flu, his works are both beautiful and disturbing, challenging observers to reinterpret their view of the tiny organisms. The pieces, each about 1,000,000 times the size of the actual pathogen, were designed with help from virologists from the University of Bristol using a combination of scientific photographs and models.