Purple People Eater: In Danger of Extinction? I have been known to receive out-of-the blue text... Into a Bar. There’s a fun little language meme over at alt.usage.english Google Group: bar jokes that hinge on fine points of grammar, punctuation, and linguistics. 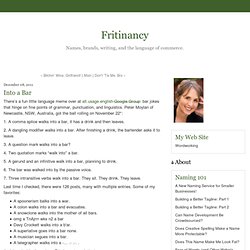 Peter Moylan of Newcastle, NSW, Australia, got the ball rolling on November 22*: 1. A comma splice walks into a bar, it has a drink and then leaves. Metalleus. Essentialist Explanations. 16th edition This page comprises a list of 1078 "essentialist explanations" of the form "Language X is essentially language Y under conditions Z". 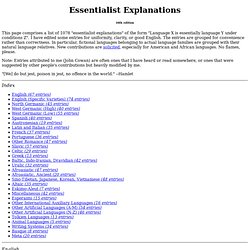 I have edited some entries for uniformity, clarity, or good English. The entries are grouped for convenience rather than correctness. In particular, fictional languages belonging to actual language families are grouped with their natural language relatives. New contributions are solicited, especially for American and African languages. Typological progress. « previous post | next post » Truly, this is the golden age of linguistic blogging. 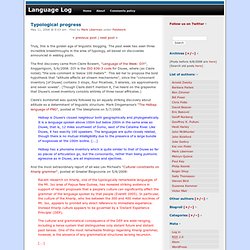 The past week has seen three incredible breakthroughs in the area of typology, all based on discoveries announced in weblog posts. The first discovery came from Claire Bowern, "Language of the Week: DIY", Anggarrgoon, 5/6/2008. DIY is the ISO 639-3 code for Diuwe, where (as Claire noted) "the sole comment is ‘below 100 meters’". This led her to propose the bold hypothesis that "altitude affects air stream mechanisms", since the "consonant inventory [of Diuwe] contains 3 stops, four fricatives, 5 laterals, six approximants and seven vowels".

Beijing restaurant serves "Wikipedia" Prostitution Medallion. Legend: The exotic medallion worn so proudly by a society matron bears an embarrassing inscription identifying her as a prostitute. 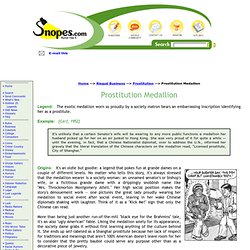 Example: [Cerf, 1952] Origins: It's an oldie but goodie: a legend that pokes fun at grande dames on a couple of different levels. No matter who tells this story, it's always stressed that the medallion wearer is a society woman: an unnamed senator's or bishop's wife, or a fictitious grande dame with a drippingly snobbish name like Montgomery Attell. " Her high social position makes the story's denouement work — one pictures the great lady proudly wearing her medallion to social event after social event, leaving in her wake Chinese diplomats shaking with laughter. The joy of English pronunciation. If your browser does not display the IPA part of Unicode correctly, here is a PDF version of the same thing. 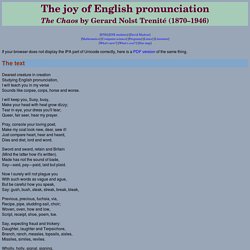 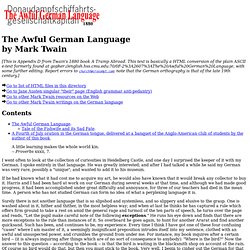 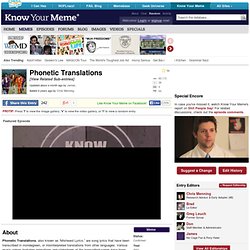 Various music videos featuring animations and slideshows of the transcribed songs have been widely shared online since the early 2000s. Origin The earliest known flash animation featuring phonetically translated lyrics was titled “Hatten är din” and posted online on January 18th, 2001 (shown below). The animation included the Arabic song “Habeetik” by the Lebanese musician Azar Habib accompanied by phonetically translated lyrics in Swedish. Spread In February of 2001, animutation creator Neil Cicierega uploaded a flash video titled “Hyakugojyuuichi!” After the launch of YouTube in 2005, many users began uploading phonetically translated music videos to the video-sharing site. Notable Examples Search Interest External References. Benny Lava revisited. Thanks to the sleuthing of an anonymous commenter, i've discovered the true identity of the Benny Lava song. it's by the Indian artist Prabhu Deva, and the title of the song is "Kalluri Vaanil. 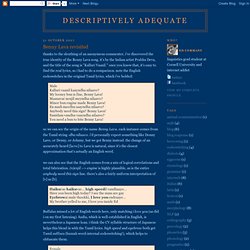 " once you know that, it's easy to find the real lyrics, so i had to do a comparison. note the English codeswitches in the original Tamil lyrics, which i've bolded: Bad Lip Reading. Autour-du-mondegreens: bunkum unbound. Autour-du-mondegreens: bunkum unbound Ben Ostrowsky writes: I've noticed a new tendency toward an old kind of language play ("Mots D'Heures: Gousses, Rames"). The new rules: 1. Find a music video in a language you don't understand. Bad Names. Some names are born bad, others achieve badness, and still others have badness thrust upon them. Here are four bad names, each bad in its own tragic, annoying, or inept way. There is simply no excuse for the spelling of Ketchuppp. According to TechCrunch, “Ketchuppp wants to help you meet up with the people you actually like spending time with on a regular basis (or did before social media ate your social life) — and do so in person, not digitally.”

(Imagine!) The 8 Most Ill-Conceived Product Names of All-Time. If you ever took Marketing 101, chances are you've heard the tale of how the Chevy Nova couldn't sell in South America. 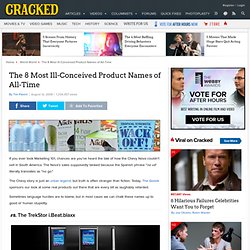 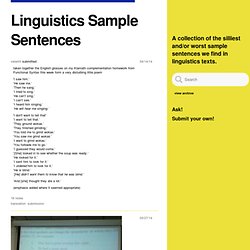