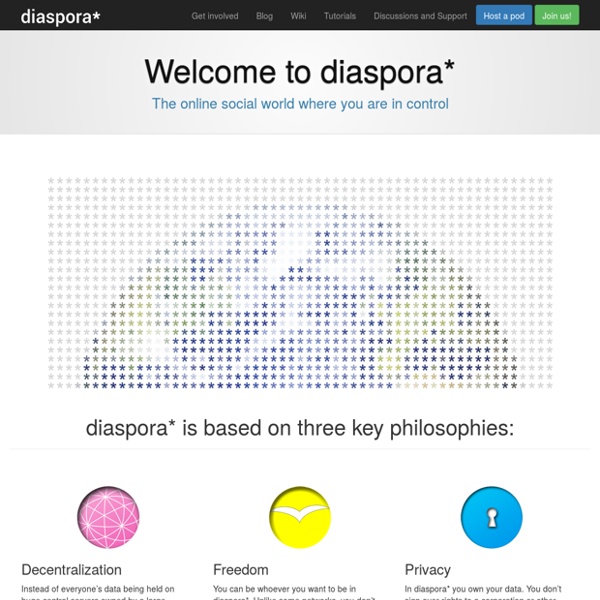 The online social world where you are in control Decentralization Instead of everyone’s data being contained on huge central servers owned by a large organization, local servers (“pods”) can be set up anywhere in the world. You choose which pod to register with - perhaps your local pod - and seamlessly connect with the diaspora* community worldwide. Find out more » Freedom

Uninstall Apps in Windows 10 2. Do step 3 (built-in apps) or step 4 (specific app) below for what you would like to do. 3. To Remove a Built-in Windows 10 App from Current Account A) Copy and paste the command below for the app you want to uninstall into PowerShell, press Enter, and go to step 5 below. (see screenshot below) What is REST? REpresentational State Transfer REST, or REpresentational State Transfer, is an architectural style for providing standards between computer systems on the web, making it easier for systems to communicate with each other. REST-compliant systems, often called RESTful systems, are characterized by how they are stateless and separate the concerns of client and server. We will go into what these terms mean and why they are beneficial characteristics for services on the Web.

The verdict: is blogging or tweeting about research papers worth it? Eager to find out what impact blogging and social media could have on the dissemination of her work, Melissa Terras took all of her academic research, including papers that have been available online for years, to the web and found that her audience responded with a huge leap in interest in her work. In October 2011 I began a project to make all of my 26 articles published in refereed journals available via UCL’s Open Access Repository – “Discovery“. I decided that as well as putting them in the institutional repository, I would write a blog post about each research project, and tweet the papers for download. Would this affect how much my research was read, known, discussed, distributed? I wrote about the stories behind the research papers – the stuff that doesn’t make it into the official writeup. So what are my conclusions about this whole experiment?

From Brueghel to Warhol: AI enters the attribution fray When art thieves broke into a church in northwestern Italy this March, they thought they were stealing a seventeenth-century work by the Flemish painter Pieter Brueghel the Younger. In fact, police in the small Ligurian town of Castelnuovo Magra had been tipped off, and swapped The Crucifixion, valued at €3 million (US$3.3 million), for a cheap copy. In fairness to the gang, a number of Brueghel’s works do look nearly interchangeable. A similar Crucifixion attributed to the same artist hangs in the Philadelphia Museum of Art in Pennsylvania. And Brueghel probably copied both paintings from another by his trailblazing father, Pieter Bruegel the Elder — whose work also heavily influenced his other son, Jan (known as Jan Brueghel the Elder).

The Next Big Social Network Is You - The BrainYard Three trends just now emerging will alter the social network landscape. Oh no, not another social network! Between all the noise about Facebook's upcoming IPO, the Twitter censorship imbroglio, and Google +'s constantly shifting privacy and identity policies, is the business world really ready for more social networking? Yes, and here's why. Social networking is about to shift from chasing large numbers of followers--which is really a publishing broadcast model and not a business contacts model--to a smaller group of well-connected individuals.

50 Animated Gifs for Every Situation Ever If a picture is worth a thousand words, then an animated gif must be worth some kind of number I can’t even begin to comprehend. If you’ve ever found yourself browsing the Internet and felt compelled to respond with a witty reply, only to come up: wow, mind. blown., golf clap, etc. Then these animated gifs are for you! With the simple copy and paste of one of the images below you can make your feelings resonate while bathing in the adulation of Internet pundits the world over. Chat ScreenShot Generator - Fake messenger text for Facebook, Twitter, Skype This Online Chat and Messenger simulator will help you recreate social media conversations and to take a screenshot image. It can simulate both Android and iPhone SMS (text message), and the most popular chat applications, such as Facebook Messenger, Skype, Twitter, Tinder, Whattsapp and Linkedin. It supports dates, images, text messages (even HTML code) and emojis. Online fake text message maker The best use of this free online tool is to create fake text messages. Recreate funny or invent fictional conversations between real or imaginary characters.

What are you revealing online? Much more than you think What can be guessed about you from your online behavior? Two computer privacy experts — economist Alessandro Acquisti and computer scientist Jennifer Golbeck — on how little we know about how much others know. The best indicator of high intelligence on Facebook is apparently liking a page for curly fries.

Revealing Economic Terrorists: a Slumlord Conspiracy "Sunlight is the best disinfectant" - U.S. Supreme Court Justice Louis Brandeis A client of ours -- a small, not-for-profit, economic justice organization [EJO] -- used social network analysis [SNA] to assist their city attorney in convicting a group of "slumlords" of various housing violations that the real estate investors had been side-stepping for years. The housing violations, in multiple buildings, included: raw sewage leaks multiple tenant children with high lead levels eviction of complaining tenants utility liens of six figures The EJO had been working with local tenants in run-down properties and soon started to notice some patterns.

Learn Skills, share tools, save money and make great new friends Streetbank is very like Justfortheloveofit. It lets you share things and skills with your neighbours and join in with community discussions. If you'd like to move your Justfortheloveofit account over to Streetbank, just enter your email address below and we'll pull your details across. Enter your email here - Free Multiplayer Drawing & Guessing Game Hello! We added: New Languages: Italian, Estonian, Korean, Hungarian and Tagalog.More player support with up to 12 players in private rooms! Custom words in private rooms.

maps.stamen.com For over a decade, Stamen has been exploring cartography with our clients and in research. These maps are presented here for your enjoyment and use wherever you display OpenStreetMap data. Toner These high-contrast B+W (black and white) maps are featured in our Dotspotting project.