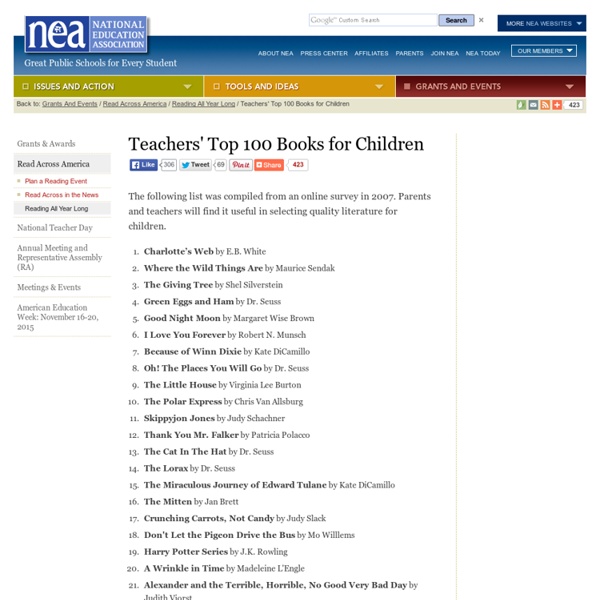 The following list was compiled from an online survey in 2007. Parents and teachers will find it useful in selecting quality literature for children. Charlotte’s Web by E.B. White Where the Wild Things Are by Maurice Sendak The Giving Tree by Shel Silverstein Green Eggs and Ham by Dr. Seuss Good Night Moon by Margaret Wise Brown I Love You Forever by Robert N. Munsch Because of Winn Dixie by Kate DiCamillo Oh!

Yuval Noah Harari: ‘Homo sapiens as we know them will disappear in a century or so’ Last week, on his Radio 2 breakfast show, Chris Evans read out the first page of Sapiens, the book by the Israeli historian Yuval Noah Harari. Given that radio audiences at that time in the morning are not known for their appetite for intellectual engagement – the previous segment had dealt with Gary Barlow’s new tour – it was an unusual gesture. But as Evans said, “the first page is the most stunning first page of any book”. If DJs are prone to mindless hyperbole, this was an honourable exception. The subtitle of Sapiens, in an echo of Stephen Hawking’s great work, is A Brief History of Humankind.

Book-A-Minute Bedtime The kids want a bedtime story again? Kids love it when their parents read to them at bedtime. But let's face it. In today's society, time is of the essence. There's only so much you can do in a day, and there isn't a lot of time left to spend with your children and a good book. UCB Parents Jokes &Quotes: Parenting Test This page is brought to you by UC Berkeley Parents Network Back to the Jokes & Quotes Collection HOW TO KNOW WHETHER OR NOT YOU ARE READY TO HAVE A BABY MESS TEST Smear peanut butter on the sofa and curtains. Now rub your hands in the wet flower bed and rub on the walls.

Summer 2012 Reading List Looking for some good summer reading? Check out the books Gwen and the Washington Week panelists recommend for the beach, the car, the plane or the pool. From fiction to politics, history to biography, there is something for everybody. The smartest reporters in Washington, D.C. bring you their suggestions for the summer's best reads. "The Passage of Power: The Years of Lyndon Johnson, Volume 4" by Robert A. Caro(Knopf Doubleday)

50 Fictional Days Immortalized in Literature Today is April 4th, the day on which George Orwell’s 1984 famously begins—in the year 1984, of course (a year that seems rather closer than usual right now). Inspired by this literary holiday of sorts, I went out in search of other notable fictional dates—that is, specific days on which something interesting happens in literature (as opposed to actual events that are reported in novels, as background or otherwise). I’m sure there are an infinite number of these out there, but there are also an infinite number of books in which the author never pins down the events at all, rather letting them float in the reader’s imagination—an approach that certainly has its merits. But if you are an obsessive planner and list-maker (like certain people, not me, not me at all), you enjoy knowing exactly what has happened, and what will happen, and when—even if said events are made up.

On the difference between Good Dogs and Dogs That Need a Newspaper Smack. « Sindelókë Today I’m feeling 101-y, I guess, so let’s talk about privilege. It’s a weird word, isn’t it? A common one in my circles, it’s one of the most basic, everyday concepts in social activism, we have lots of unhelpful snarky little phrases we like to use like “check your privilege” and a lot of our dialog conventions are built around a mutual agreement (or at least a mutual attempt at agreement) on who has privilege when and how to compensate for that. But nonetheless fairly weird, opaque even if you’ve never used it before or aren’t part of those circles. Top 6 Things Moms Wish Dads Knew - New Parent - Your Life No matter how painstakingly daddies-to-be pore over the pregnancy and parenting guides, there’s invariably a lesson or two they’ll overlook about dealing with a new baby and a postpartum woman. And, according to Bumpies, guys tend to miss the same few things over and over. From real moms, here are the top things women wish new dads knew (yes, there’s an entire section dedicated to diapers). Pregnant women/new moms: Print it out, add your notes, and hand to your husband. New/soon-to-be dads: Memorize it.