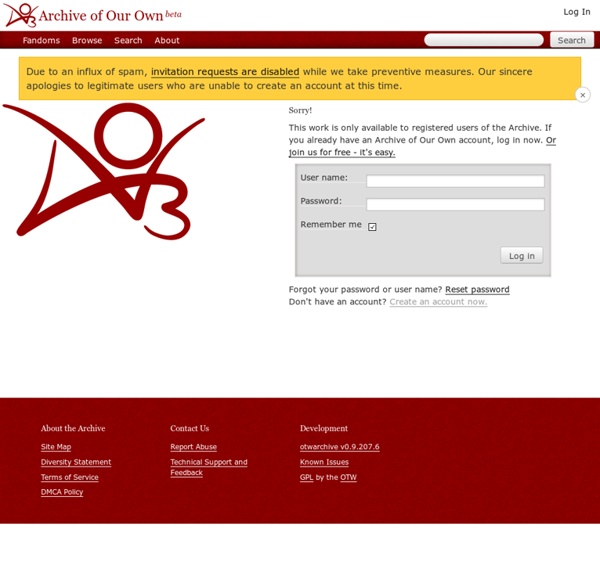 Main Content <p id="javascript-warning"> While we&#39;ve done our best to make the core functionality of this site accessible without javascript, it will work better with it enabled. Please consider turning it on! </p> Archive of Our Own beta Log In Forgot password? Site Navigation Due to an influx of spam, invitation requests are disabled while we take preventive measures. Sorry! This work is only available to registered users of the Archive. Submit Forgot your password or user name? Footer Close

Wolf Run - TriscuitsandSoup It's just after midnight when they drive by the house. The lights are off but a soft blue glowing eliminates from one of the windows. The police cruiser is missing from the driveway. Submit to Fate - The_Pied_Piper :Within the Starship Hangar of the Palace of Nabu, tPM: The moment he entered the hangar, he knew. The sense, so base and primal within him, had been ignited only a few weeks prior. It had rocked the Zabrak to his core- confounded the dark teachings of the Sith within him. Moment of Weakness - longleggedgit Merlin's not entirely sober himself when Uther leads his son across the court and drapes his arm unceremoniously across Merlin's shoulders, hissing "Get him out of here" under his breath. But, taking a good look at Arthur as they plod carefully out of the banquet room and up the stone steps toward Arthur's chambers, he has to wonder how much wine a person even needs to consume to achieve that level of intoxication. "Almost there," Merlin says, trying not to let his own unsteady legs fail them as Arthur vastly overshoots the top step and collapses to his knees. Arthur pauses for a moment to evaluate his situation and then breaks into snorting laughter.

Hunger & Release - Twisted_Mind The first time they acted on what they’d been dancing around since the parking garage, Stiles felt three undeniable truths settle in his bones: that this was going to be messy as hell, that it was inevitable, and that it was going to happen again. He’d known from the first time Peter touched him—really touched him, with intent to claim—that he wouldn’t be able to give this up, not now that he knew what it was like. The two of them had been trying to come down off an amphetamine-fuelled research binge after finding the answer. While Stiles had been energetic to the point of jittery, Peter had been tightly-coiled, focussed. Hungry.

Equilibrium : Balance in the Force - glacis Equilibrium : Balance in the Force. Phantom Menace alternate universe branching off from The Climactic Battle (the only one worth watching, where the Sith revealed himself to the Jedi. This is quite a bit more revealing). Note : training or life bonds don't exist in this universe, one of my nods to canon, which for me consists of only the four movies, no accompanying novels.

In Deep - ximeria Awkward doesn't even begin to cover it. It's supposed to be sweet, exhilarating, awe-inspiring, even. All Merlin can think about as their teeth clash, is that the damp mud of the river bank is seeping through his shirt and that he's getting awfully cold and wet. The Matchmaker - Green The front of Stiles's shop is small, but then again, he doesn't need much room. There's no big waiting room, just a couple chairs with a table between them. On the table is a plant. It's struggling to survive because Stiles isn't exactly good with plants, but he thinks it makes the room feel more lively. Separating the 'waiting room' from where he does business is a bead curtain. He's always wanted a bead curtain, and when he set up his shop, he went out and bought one.

(Freedom's) Just Another Word - Carmarthen Juvenilia (Carmarthen) Obi-Wan frowned at his starship's screen. The droid fighters had taken out one of his rear thrusters, as well as most of his shields. The hyperdrive wasn't in great shape either after all those jumps. Over the com he could hear his astromech trying to lock what remained of the thruster down, but he didn't feel very optimistic about R4's chances. He'd followed the signal of the tracking beacon on the Sith Lord's ship from Naboo to Tarsis IV, the droid fighters hot on his tail.

The Romans Used To Walk This Land - facetofcathy "Merlin, Merlin, come on now, leave that," Arthur said and snatched the bundle of herbs right out of his hand and tossed them down onto the nearest flat surface. "You're going to lend me some clothes." "Ah," said Gaius. Countin' verse - evanelric Peter totters into view as if he were drunk, a pair of sweatpants barely pulled over his hips. Stiles knows, though, that Peter physically cannot consume enough alcohol fast enough to get drunk, and that there are very few things that can make Peter stagger around like someone’s tossing his inner ears around in a dice cup. Wolfsbane is out, unless a hunter was hiding in the dirty laundry piled on the bathroom floor, which leaves only one alternative. Stiles had really been hoping they’d get a few more weeks before Chris had to take a sick day.

Breaking the Chains, Forging the Links Chapter 1: Down, a star wars fanfic Disclaimer: I do not own any of the original Star Wars characters. I do own the OCs, though. I do not make a £ from this. After reading "Lockdown" and watching the two final seasons of Clone Wars, this almost started to write itself on its own. It's hard to read/watch anything involving Darth Maul without feeling even a bit of pity towards him.Child soldier? Working out the Kinks - ximeria "I need you to take this," Arthur said, dropping a small flask into Merlin's hand, "and rub my shoulders and neck with it." Merlin stared at the broad expanse of skin as Arthur turned away from him, naked to the waist, bracing his hands on the table. Outside the darkness of late night was creeping over Camelot and inside, the light from the fire cast the most enticing shadows on Arthur's skin. He could see the muscles working under the skin and he noticed the telltale signs of the stiffening of muscles already setting in.

Three's A Crowd (So Follow The Sound) - Chapter 4 - naijagirl101 Chapter Text Stiles is a worrier. He knows it, his father and friends know it, everybody knows it. He figures that even if he hadn’t watched his Mom die young, he’d probably have always become the kind of person who needed to fight anxiety with research.