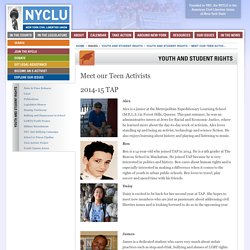 This past summer, he was an administrative intern at Jews for Racial and Economic Justice, where he learned more about the day-to-day work of activism. Alex loves standing up and being an activist, technology and science fiction. He also enjoys learning about history and playing and listening to music. Ben Ben is a 14-year-old who joined TAP in 2014. Daisy Daisy is excited to be back for her second year at TAP. James James is a dedicated student who cares very much about unfair practices such as stop-and-frisk, bullying and abuses of LGBT rights. Janay Janay is a sophomore at A. Jensine Jensine is a second-year returning member to TAP.

Julia This is Julia's first year with TAP. Julissa Julissa Ramirez is a senior and member of TAP. Justine This is Justine’s first year at TAP and so far she is enjoying it. Kevin Krutika Luke Mallory Mallory is 14-years-old. Youth-Led Social Activism. The following are websites, organizations and publications that share the power and purpose of youth-led social activism. 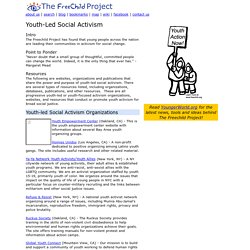 There are several types of resources listed, including organizations, databases, publications, and other resources. These are all progressive youth-led or youth-focused activism organizations, websites, and resources that conduct or promote youth activism for broad social justice. Youth-led Social Activism Organizations Youth Empowerment Center (Oakland, CA) - This is the youth empowerment center website with information about several Bay Area youth organizing groups.

Homies Unidos (Los Angeles, CA) - A non-profit dedicated to positive organizing among Latino youth gangs. Ya-Ya Network Youth Activists/Youth Allies (New York, NY) - A NY citywide network of young activists, their adult allies & established youth programs. Just Act! Youth Speaks (San Francisco, CA) - Building and nurturing the next generation of leaders through the written and spoken word. The New Face of Teen Activism. Sit-ins, marches, picket signs—these are the images we conjure up when we think of activism in the traditional sense, but for teens and twenty-somethings, change is starting with the click of a mouse. 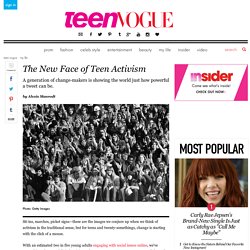 With an estimated two in five young adults engaging with social issues online, we've entered into the age of digital activism, where grassroots movements are created through tweets, reblogs, likes, and status updates. Though some critics derisively refer to it as "slacktivism," this new wave is proving how logging on can seriously impact your community—and the world. "I had always been interested in women's rights, but I didn't consider myself an activist until I joined Tumblr four years ago," says college freshman Melissa Hudson, whose activism relates to sexual assault, reproductive rights, and LGBTQ issues.

Victoria Snow, the blogger who runs the Tumblr Feminish, agrees: "I can honestly say I wouldn't be the feminist I am today without the internet. " 15 Teenage Activists Who Deserve An Award. The Youth Advisory Board is a group of passionate, incredible, and super-dedicated Street Teamers who help peta2 with creating missions, feedback on campaigns, and with pretty much everything peta2 does. 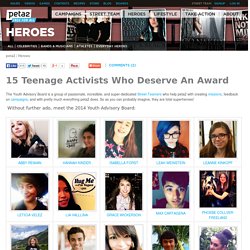 So as you can probably imagine, they are total superheroes! Without further ado, meet the 2014 Youth Advisory Board: Abby Reiman Location: McLean, Virginia Abby has worked closely with a local cat-rescue group and has found homes for a dozen kittens. What keeps her motivated: “My life has no purpose if I can’t help animals. … I want to spend my whole life helping them and speaking up for them. Hannah Kinder Location: Boone, North Carolina Hannah is rocking out as a junior at Appalachian State University, where she is majoring in environmental and evolutionary biology and ecology. Youth Activism Project » Success Stories. These youth-led initiatives reveal that young people can be very influential with their peers, younger peers, parents, the press, the private sector, politicians and other policymakers. 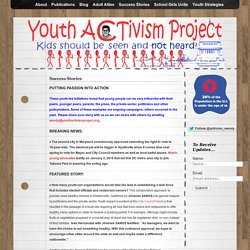 Some of these examples are ongoing campaigns; others occurred in the past. Please share your story with us so we can share with others by emailing wendy@youthactivismproject.org. ♦ The second city in Maryland unanimously approved extending the right to vote to 16-year-olds. The electoral pie will be bigger in Hyattsville when it comes time next spring to vote for Mayor and City Council members as well as local ballot issues.

Watch young advocates testify on January 5, 2015 that led this DC metro area city to join Takoma Park in lowering the voting age. ♦ How many youth-run organizations would take the lead in establishing a task force that includes elected officials and restaurant owners? ♦ A youth-led coalition scored a big win getting a Student T Pass for Boston mass transit.