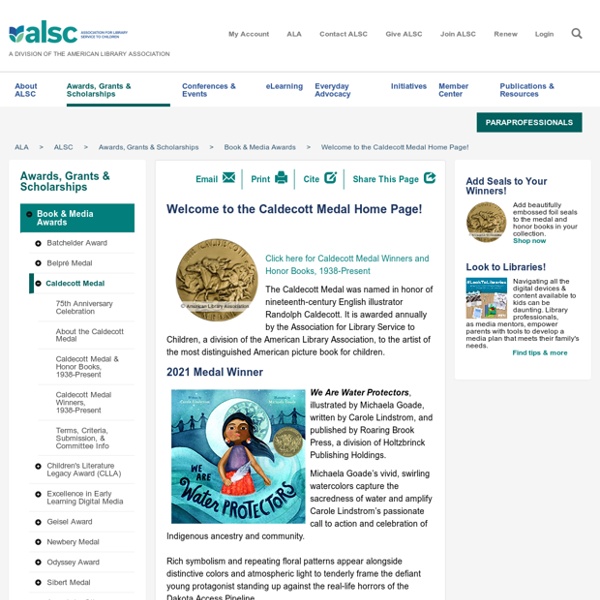 Click here for Caldecott Medal Winners and Honor Books, 1938-Present The Caldecott Medal was named in honor of nineteenth-century English illustrator Randolph Caldecott. It is awarded annually by the Association for Library Service to Children, a division of the American Library Association, to the artist of the most distinguished American picture book for children. 2021 Medal Winner We Are Water Protectors, illustrated by Michaela Goade, written by Carole Lindstrom, and published by Roaring Brook Press, a division of Holtzbrinck Publishing Holdings. Michaela Goade’s vivid, swirling watercolors capture the sacredness of water and amplify Carole Lindstrom’s passionate call to action and celebration of Indigenous ancestry and community. 2021 Honor Books A Place Inside of Me: A Poem to Heal the Heart, illustrated by Noa Denmon, written by Zetta Elliott, and published by Farrar Straus Giroux Books for Young Readers, an imprint of Macmillan Publishing Group. Cozbi A.

Printz Award The Michael L. Printz Award is an award for a book that exemplifies literary excellence in young adult literature. It is named for a Topeka, Kansas school librarian who was a long-time active member of the Young Adult Library Services Association. The award is sponsored by Booklist, a publication of the American Library Association. Coretta Scott King Book Award Recipients Author Award Winner Kadir Nelson, author and illustrator of “Heart and Soul: The Story of America and African Americans” (Balzer + Bray, an imprint of HarperCollins Publishers). “Heart and Soul: The Story of America and African Americans” is an extensive volume focusing on American history as it intertwines with the lives of African Americans. The story is told from the viewpoint of an elderly woman who shares her life story while highlighting pivotal historical events including abolition, the Great Migration, World War II, and the Civil Rights movement. Illustrator Award Winner

Dia de los Libros A list of awards and grants that might be of interest to those who celebrate Día in their library and community is compiled below. Américas Award –The Consortium of Latin American Studies founded the Américas Award in 1993 to encourage and commend authors, illustrators and publishers who produce quality children’s and young adult books that portray Latin America, the Caribbean, or Latinos in the United States, and to provide teachers with recommendations for classroom use. CLASP offers up to two annual book awards, together with a commended list of titles. Charlotte Huck Award (Fiction for Children) 2020 NCTE Charlotte Huck Awards 2020 Winner Room on Our RockWritten by Kate & Jol Temple Illustrated by Terri Rose Baynton(Kane Miller) Honor Books Geisel (Dr. Seuss) Award The Geisel Award is given annually to the author(s) and illustrator(s) of the most distinguished American book for beginning readers published in English in the United States during the preceding year. 2021 Medal Winner See the Cat: Three Stories About a Dog, written by David LaRochelle, illustrated by Mike Wohnoutka, and published by Candlewick Press See the Cat: Three Stories About a Dog is a deceptively simple book that teaches readers the power of words. The text is in direct contrast with the illustrations, defying both the reader’s and Max the Dog’s expectations.

Spanish-Language Literature Resources Compiled by the Cooperative Children's Book Center Updated: December, 2013 This listing of resources about Spanish-language books for children and teens has been developed in response to the need for Spanish-language materials in schools and libraries. The listing includes the following: Excellence in Poetry for Children (Living American Poet) Literary Merit (art and craft of aggregate work – as poet or anthologist). Creating books of poetry that demonstrate imagination, authenticity of voice, evidence of a strong persona, and universality/timelessness are essential. In short, we are looking for a poet who creates poetry books that contain clean, spare lines; use language and form in fresh ways; surprise the reader by using syntax artistically; excite the reader’s imagination with keen perceptions and sharp images; touch the reader’s emotions: a maker of word events. Poet’s or Anthologist’s Contributions. Aggregate work, evident potential for growth and evolution in terms of craft, and excellence are considered. Evolution of the Poet’s or Anthologist’s Work.

Back To School Books {Hello! If you are checking us out for the first time and like what you see you can subscribe here, check out our Pinterest boards and follow us on Facebook to get new ideas to play and learn with your kids daily. } School is less than a month away for some of my readers while others still have a while before the alarm clocks get set, lunches get packed and they get on the school bus. Young Adult Award Winners *YALSA has launched the new Teen Book Finder Database, which is a one-stop shop for finding selected lists and award winners. Users can search this free resource by award, list name, year, author, genre and more, as well as print customizable lists. This new resource will replace the individual award and list web pages currently on YALSA’s site that are not searchable and that are organized only by year.

"This site allows the reader to see the books that were awarded the Caldecott Medal because of their remarkable success with their picture books." by seandouble Jan 31