Russell Foster: Why do we sleep? Why the Teen Brain Is Drawn to Risk. If you’re the parent of a tween, be warned: your cautious 10-year-old is bound to turn into a wild child in a few short years, with seemingly no regard whatsoever for safety. 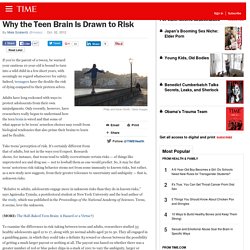 Indeed, teenagers have the double the risk of dying compared to their preteen selves. Adults have long reckoned with ways to protect adolescents from their own misjudgments. Only recently, however, have researchers really begun to understand how the teen brain is wired and that some of what appear to be teens’ senseless choices may result from biological tendencies that also prime their brains to learn and be flexible. Take teens’ perception of risk. It’s certainly different from that of adults, but not in the ways you’d expect. “Relative to adults, adolescents engage more in unknown risks than they do in known risks,” says Agnieszka Tymula, a postdoctoral student at New York University and the lead author of the study, which was published in the Proceedings of the National Academy of Sciences.

Four neuromyths that are still prevalent in schools – debunked. It is no surprise that many teachers have an interest in neuroscience and psychology since areas such as memory, motivation, curiosity, intelligence and determination are highly important in education. 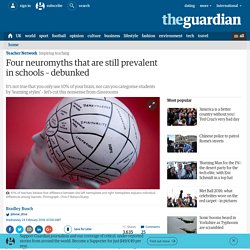 But neuroscience and psychology are complex, nuanced subjects that come with many caveats. Although progress is being made towards understanding what helps and hinders students, there is still a disconnect between the research in labs and what happens in many schools. Many “neuromyths” are rampant in our classrooms, and research suggests that people are often seduced by neuroscientific explanations, even if these are not accurate or even relevant.

Research also shows that explanations accompanied by images of the brain also persuade people to believe in their validity, however random the illustration. Such myths are a drain on time and money, and it is important to explore and expose them. Learning styles Where next for learning styles? You only use 10% of your brain Right brain v left brain. Teen brain - science and risk. The Science of Practice: What Happens When You Learn a New Skill. BBC iWonder - Can singing in a choir make me healthier? Future - The man who thinks like Sherlock Holmes. If you’d told Alex Mullen a few years ago that he was capable of memorising a whole pack of cards in 21.5 seconds, he would have said you were being ridiculous. 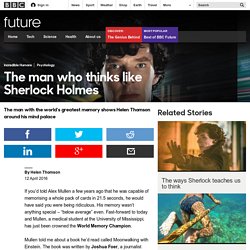 His memory wasn’t anything special – “below average” even. Fast-forward to today and Mullen, a medical student at the University of Mississippi, has just been crowned the World Memory Champion. Mullen told me about a book he’d read called Moonwalking with Einstein. The book was written by Joshua Foer, a journalist who attended a US memory championship to write about what he thought would be “the Super Bowl of savants”. Instead, he found a group of people who had trained their memory using ancient techniques. Mullen was spurred on to improve his own memory by Foer’s story. The championship took place in December in Guangzhou, China.

Mullen was in second place when they began the final task. Mullen now holds the world record for remembering as many numbers as possible in one hour – 3,029. Enter your mind palace Paint by numbers. How Chris McCandless Died. Twenty-one years ago this month, on September 6, 1992, the decomposed body of Christopher McCandless was discovered by moose hunters just outside the northern boundary of Denali National Park. 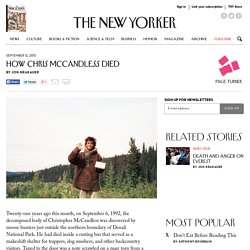 He had died inside a rusting bus that served as a makeshift shelter for trappers, dog mushers, and other backcountry visitors. Taped to the door was a note scrawled on a page torn from a novel by Nikolai Gogol: ATTENTION POSSIBLE VISITORS. S.O.S. I NEED YOUR HELP. From a cryptic diary found among his possessions, it appeared that McCandless had been dead for nineteen days. In “Into the Wild,” the book I wrote about McCandless’s brief, confounding life, I came to a different conclusion. I’ve received thousands of letters from people who admire McCandless for his rejection of conformity and materialism in order to discover what was authentic and what was not, to test himself, to experience the raw throb of life without a safety net.