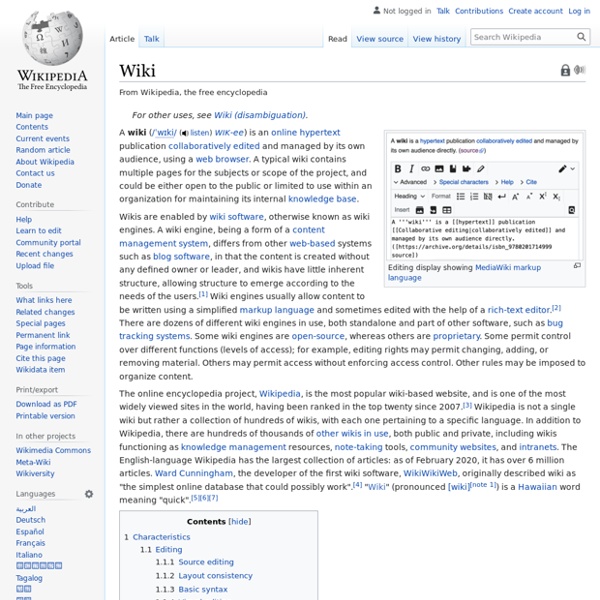 Type of website that visitors can edit A wiki ( WIK-ee) is a hypertext publication collaboratively edited and managed by its own audience directly using a web browser. A typical wiki contains multiple pages for the subjects or scope of the project and could be either open to the public or limited to use within an organization for maintaining its internal knowledge base. Wikis are enabled by wiki software, otherwise known as wiki engines. The online encyclopedia project Wikipedia is the most popular wiki-based website, and is one of the most widely viewed sites in the world, having been ranked in the top ten since 2007.[3] Wikipedia is not a single wiki but rather a collection of hundreds of wikis, with each one pertaining to a specific language. In addition to Wikipedia, there are hundreds of thousands of other wikis in use, both public and private, including wikis functioning as knowledge management resources, notetaking tools, community websites, and intranets. Characteristics Editing

Hypertext Engineer Vannevar Bush wrote "As We May Think" in 1945 in which he described the Memex, a theoretical proto-hypertext device which in turn helped inspire the subsequent invention of hypertext. Etymology[edit] "(...)'Hypertext' is a recent coinage. Open Source Ecology Open Source Ecology: Practical post scarcity The 50 machines that compose the Global Village Construction Set Open Source Ecology (OSE) is a network of farmers, engineers, architects and supporters, whose main goal is the eventual manufacturing of the Global Village Construction Set (GVCS). As described by Open Source Ecology "the GVCS is an open technological platform that allows for the easy fabrication of the 50 different Industrial Machines that it takes to build a small civilization with modern comforts

Hypertext fiction Hypertext fiction is a genre of electronic literature, characterized by the use of hypertext links which provide a new context for non-linearity in literature and reader interaction.[1] The reader typically chooses links to move from one node of text to the next, and in this fashion arranges a story from a deeper pool of potential stories. Its spirit can also be seen in interactive fiction. Definitions[edit] To Espen Aarseth, cybertext is not a genre in itself; in order to classify traditions, literary genres and aesthetic value, texts should be examined at a more local level.[4] To Aarseth, hypertext fiction is a kind of ergodic literature: In ergodic literature, nontrivial effort is required to allow the reader to traverse the text. To Aarseth, the process of reading immersive narrative, in contrast, involves "trivial" effort, that is, merely moving one's eyes along lines of text and turning pages; the text does not resist the reader.

Fab lab A fab lab (fabrication laboratory) is a small-scale workshop offering (personal) digital fabrication.[1][2] A fab lab is generally equipped with an array of flexible computer controlled tools that cover several different length scales and various materials, with the aim to make "almost anything".[3] This includes technology-enabled products generally perceived as limited to mass production. While fab labs have yet to compete with mass production and its associated economies of scale in fabricating widely distributed products, they have already shown the potential to empower individuals to create smart devices for themselves. These devices can be tailored to local or personal needs in ways that are not practical or economical using mass production. Meet the moderators At Opensource.com, the stories shared with you are moderated by a core group that consists of: the Opensource.com editorial team, the Opensource.com community moderators, and a select group of Red Hat advisors who are experts in their fields. Editorial Team Jason Hibbets is a project manager in Corporate Marketing at Red Hat where he is the lead administrator, content curator, and community manager for Opensource.com.

Assorted Stuff: Tech in Learning - ideer til brugen af blogs Blogs are primarily about writing. But within that broad category there are many ways that blogging can be used with students to improve their learning in almost any subject area. Teachers can also use blogs for a variety of purposes. Text of Creative Commons Attribution-ShareAlike 3.0 Unported License 1. Definitions "Adaptation" means a work based upon the Work, or upon the Work and other pre-existing works, such as a translation, adaptation, derivative work, arrangement of music or other alterations of a literary or artistic work, or phonogram or performance and includes cinematographic adaptations or any other form in which the Work may be recast, transformed, or adapted including in any form recognizably derived from the original, except that a work that constitutes a Collection will not be considered an Adaptation for the purpose of this License. For the avoidance of doubt, where the Work is a musical work, performance or phonogram, the synchronization of the Work in timed-relation with a moving image ("synching") will be considered an Adaptation for the purpose of this License." 2. Fair Dealing Rights

Open Source, Development and Design Why do we consider the "open source" model a driver of leapfrog development? There are (at least) three good reasons: it enables production as well as consumption; it enables localization for communities that don't have the resources to tempt commercial developers to provide local versions of their products; it can be free as in "gratis" as well as free as in "libre" -- an important consideration for developing communities. All of this will be familiar territory for regular readers, but two more good examples of the utility of the free/libre/open source model emerged in recent days: the Africa Source conference in Uganda, and the Open Source Appropriate Technology discussion at Agroblogger. The Africa Source II conference, held in Kalangala, Uganda, has just finished up, and it looks to have been a real success. Africa Source II focuses on how open source technologies can be implemented by non-governmental organizations working in Africa. Q: From your experiences, what works best?

Wiki: a wiki is a connected series of web pages whose content may be amended by a group of people working together. Found in: 2012 - (Oliver) Succeeding With Your Literature Review by raviii Apr 10