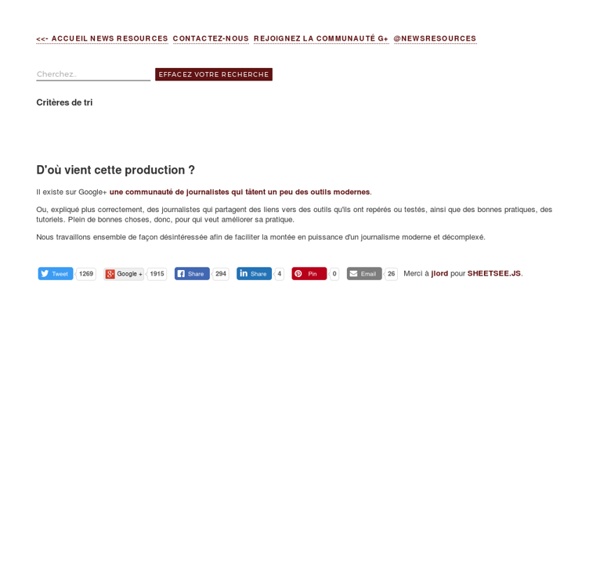 12 communities for journalists you should know about — Media Memo 12 communities for journalists you should know about One of the culture shocks about going freelance is the fact most of the time it’s just me at the kitchen table, getting words down with only Mr Coffee for company. As a staff journalist I relished the occasional chance to work from home, free from the distractions of the office, but do it every day and it starts to wear a bit thin.

Pym.js: Embed iframes responsively About Pym.js Using iframes in a responsive page can be frustrating. It’s easy enough to make an iframe’s width span 100% of its container, but sizing its height is tricky — especially if the content of the iframe changes height depending on page width (for example, because of text wrapping or media queries) or events within the iframe.

Friends and enemies in the Middle East. Who is connected to whom? - interactive As the US and UK are set to again commit to military involvement in the Middle East, this interactive visualises the intricate, complex and sometimes hidden relationships and alliances across the region. Its tangled, opened state is meant as a kind of visual joke, showing how its fabric defies simple solutions. You can filter relationship types ‘on’ and ‘off’ in the bottom left and also rollover and click on different players to get a clarified view. Understandably, this is an ongoing, evolving diagram which we hope to add to. So feel free to help us make this diagram more accurate.

Media Survey – Burson-Marsteller – Europe, Middle East & Africa Innovation & Insights Media Survey In 2012, Burson-Marsteller media experts interviewed a plethora of journalists from across the EMEA region to get an inside view of how social media was perceived by journalists and how it was being used in today’s news cycle. In particular, our aim was to understand the effects of the digital revolution, especially social media. How are social networks effecting the news cycle?

9 Tools to Create E-magazines and Newspapers for Your Class 1- Uniflip UniFlip converts your magazine, brochure or catalog from its original PDF format into an exciting, professional multi-media digital format with pages that flip. 2-Joomag Joomag is a web tool that lets you create your own magazines using a simple online editor.

Journalism Tools sur Pinterest Pinterest Today Explore 20 tools and resources every journalist should experiment with Tools have always come from the need to carry out a specific task more effectively. It's one of the main differences between human beings and the rest of the animal kingdom. We may still be slaves to the same old evolutionary urges but we sure know how to eat noodles in style. In journalism, an abstract tool for uncovering the most interesting and insightful information about society, we can generally boil the workflow down to four stages: finding, reporting, producing and distributing stories.