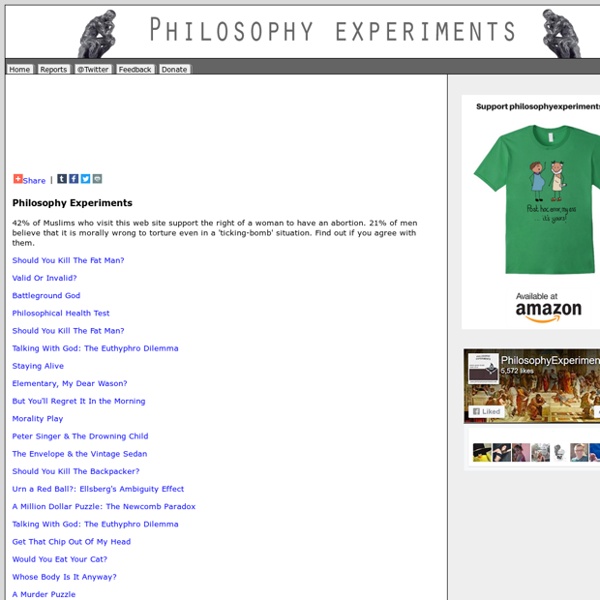 Symbolic Logic Symbolic logic is the method of representing logical expressions through the use of symbols and variables, rather than in ordinary language. This has the benefit of removing the ambiguity that normally accompanies ordinary languages, such as English, and allows easier operation. There are many systems of symbolic logic, such as classical propositional logic, first-order logic and modal logic. Prisoners' Dilemma Prisoners' Dilemma is a game which has been and continues to be studied by people in a variety of disciplines, ranging from biology through sociology and public policy. Among its interesting characteristics are that it is a "non-zero-sum"game: the best strategy for a given player is often one that increases the payoff to one's partner as well. It has also been shown that there is no single "best" strategy: how to maximize one's own payoff depends on the strategy adopted by one's partner.

Consequentialism FAQ The Consequentalism FAQ (Formatted Answers and Questions) Table of Contents 0: Introduction1: Whirlwind Metaethics2: Morality Must Live in the World3: Assign Value to Other People4: In Which We Finally Get to Consequentialism5: The Greatest Good for the Greatest Number6: Rules and Heuristics7: Problems and Objections8: Why it Matters 0.1: Who are you? Where am I? You can find more about me at www.raikoth.net.

Webrangers This is the National Park Service's site for kids of all ages. If you love our National Parks, Monuments and Historic Sites, this site is for you. If you are new to our National Parks, we hope this site helps you experience how wonderful they can be. We've recently updated this site to make it even more fun. You can now customize you Ranger Station, earn more rewards, and play new activities! The Tree of Contemplative Practices The Tree illustrates some of the contemplative practices currently in use in secular organizational and academic settings. This is not intended to be a comprehensive list. Below the Tree you will find links to descriptions of many of these practices as well as a more in-depth description of the Tree and image files for downloading. Some of the practices on the tree link to further information–either on our website, or on Wikipedia. © The Center for Contemplative Mind in Society Concept & design by Maia Duerr; illustration by Carrie Bergman

The Non-Libertarian FAQ The Non-Libertarian FAQ (aka Why I Hate Your Freedom) Version 2.0: Now With More Statism! Contents śĦeℓℓỴ :] on we heart it / visual bookmark #5103823 xd | We Heart It Cruel xd Add to collections You don't have any collections… What is Philosophy? An Omnibus of Definitions from Prominent Philosophers by Maria Popova “Philosophy is 99 per cent about critical reflection on anything you care to be interested in.” Last week, we explored how some of history’s greatest minds, including Richard Feynman, Carl Sagan, Albert Einstein, Marie Curie, and Isaac Asimov, defined science. Kant famously considered philosophy the “queen of the sciences” — whether or not that is true, philosophy seems even more elusive than science to define.

On the War on Drugs, Noam Chomsky interviewed by Week Online DRCNet, February 8, 2002 Week Online: During Sunday’s SuperBowl, the drug czar’s office ran a series of paid ads attempting to link drug use and the “war on terrorism.” If you use drugs, the ads said, you support terrorism. The 150 Best Online Flash Games It was a long and exhausting task: playing hundreds of online games for hours in a row, day after day. It was hard, but someone had to do it. The result is the list that you will find below. Enjoy! Alumni Weekly: Mapping an Argument Reading philosophy is not easy. If you’ve ever slogged through, say, Kant’s Prolegomena to Any Future Metaphysics, you’ll know just how dense it can be. Simon Cullen, a postdoctoral fellow in Princeton’s philosophy department, watched students struggle with Kant and other difficult philosophers two years ago, while leading an undergraduate precept in moral philosophy. Cullen was starting to despair when he recalled the brightly colored argument “maps” he’d seen back home in Melbourne, where they were used to teach critical thinking. “Basically,” Cullen said, “[they offer] a way of expressing concisely the content and structure of an argument.” At first he would draw up the maps himself and hand them out at the beginning of each class.