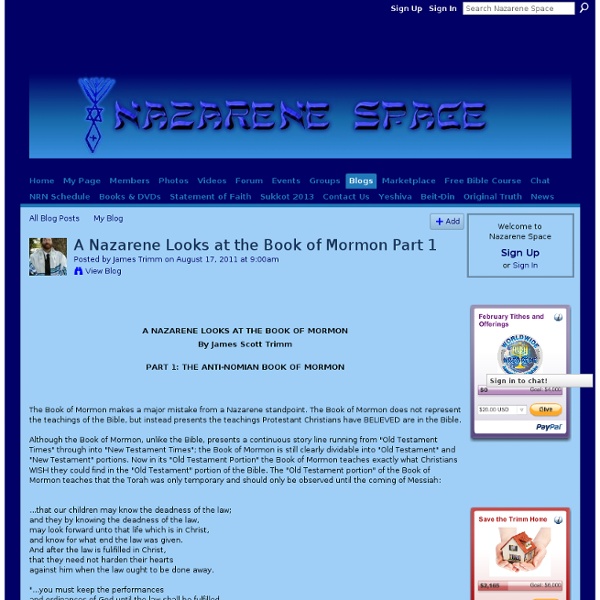 By James Scott Trimm The Book of Mormon makes a major mistake from a Nazarene standpoint. The Book of Mormon does not represent the teachings of the Bible, but instead presents the teachings Protestant Christians have BELIEVED are in the Bible. Although the Book of Mormon, unlike the Bible, presents a continuous story line running from "Old Testament Times" through into "New Testament Times"; the Book of Mormon is still clearly dividable into "Old Testament" and "New Testament" portions. ...that our children may know the deadness of the law; and they by knowing the deadness of the law, may look forward unto that life which is in Christ, and know for what end the law was given. "...you must keep the performances and ordinances of God until the law shall be fulfilled which was given to Moses." - 2Nephi 25:27, 30 (supposedly between 559 & 545 BC) "...but I say to you, that the time shall come when it shall no more be expedient to keep the law of Moses." - Mosiah 13:27 (supposedly in 148 BC) Related:  yhwh truth • Philosophy

PodOmatic | Podcast - Passion for Truth Ministries Bhagavad Gita - Bhagavad Gita Online - Bhagavad Gita YAH'S WATCHMAN Scientific Facts in The Bible Also See Scientists are now finding that the universe in which we live is like a diamond studded Rolex, except the universe is even more precisely designed than the watch. In fact, the universe is specifically tweaked to enable life on earth. Anthropic Principles Contrast the information on this page with the scientific knowledge of the Qur’an. “When studying the science of the ancient world, one is more apt to be impressed with its ignorance than to admire its accuracy. Examples of the more striking scientific accuracy in the Bible include The UniverseTime and SpaceThe BeginningAn Initial VoidAn Expanding UniverseSpace is EmptyThat Hole In The NorthAir Has WeightThose Singing StarsAnd There are Quite a Few of Them The EarthAtomsThe Earth is a SphereThe Rotation Of The EarthThe Orbit of The SunGravitational Properties of ConstellationsPangaea and PelegFirst and Second Laws of ThermodynamicsTalking Lightning? The OceansThe Paths Of The SeasMountains Under The SeasSprings Under The Seas Adding

Antiquities of the Jews by Flavius Josephus This work was translated by William Whiston and edited by the folks at Sage Software, who offer these works, as well as hundreds of ancient and modern authors, on CD from (I am not associated with Sage Software, but left the plug for their CD in place because it is from their production of the text that my work here is based.) Preface Book I Containing The Interval Of Three Thousand Eight Hundred And Thirty-Three Years. Chapter 1 The Constitution Of The World And The Disposition Of The Elements. Chapter 2 Concerning The Posterity Of Adam, And The Ten Generations From Him To The Deluge Chapter 3 Concerning The Flood; And After What Manner Noah Was Saved In An Ark, With His Kindred, And Afterwards Dwelt In The Plain Of Shinar Chapter 4 Concerning The Tower Of Babylon, And The Confusion Of Tongues Chapter 5 After What Manner The Posterity Of Noah Sent Out Colonies, And Inhabited The Whole Earth Chapter 6 Chapter 7 Chapter 8 Chapter 9 Chapter 10 Chapter 11

The Book of Jasher Sacred-textsApocrypha Referred to in Joshua and Second Samuel Faithfully Translated "Is not this written in the Book of Jasher?" This is one of the apochrypal Books of Jasher. There is also another spurious Book of Jasher, published 1750, in which Jasher is treated as the name of the author. This text covers much of the same ground as the traditional Mosaic books of the Bible, from the creation of the world to the death of Moses, albeit with several minor variations. Ancient Near Eastern Texts Relating to the Old Testament Ancient Near Eastern Texts Relating to the Old Testament edited by James B. Pritchard (1st ed. 1950, 2nd ed.1955, 3rd ed. 1969[1]) is an anthology of important historical, legal, mythological, liturgical, and secular texts from the ancient Near East. William W. Hallo, writing in the Journal of the American Oriental Society in 1970, described it as "a modern classic ever since its first appearance in 1950", because "for the first time it assembled some of the most significant Ancient Near Eastern texts in authoritative, generously annotated English translations based on the accumulated insight of several generations of scholarship scattered".[2] It is conventional to cite the work as ANET.[3] ANEP refers to a companion volume Ancient Near Eastern Pictures Relating to the Old Testament (1969), featuring 882 black and white designs and photos.[4] Publication[edit] The book was published by Princeton University Press, Princeton, New Jersey, in 1950. Contents[edit] I. II. III. Also:

Hebrew Name for God - The Messiah (Mashiach) The honor and majesty with which David tells us (Psalm 104) that GodHimself is clothed He will bestow on the Messiah. As it is said,'His glory is great in Thy salvation, honour and majesty hast Thou laid upon Him.' (Numbers Rabbah 14) Introduction Messiah in the Midrash There is a long tradition of midrash (commentary) concerning the Mashiach among the Jewish sages. From the time of creation constant reference is made in Holy Writ to Messiah and the Messianic hope of Israel. Messiah and New CreationWhen God first created the "generations" of the heavens and the earth, the word toldot (תולדות) is used (Gen. 2:4). The name "Perez" (פרץ) means "breach" (from paratz, meaning "to break through"). The Restored Vav is a picture of the Mashiach who would would descend from the "generations" of the line of Perez. To Anoint Mashach.Qal 3ms; to anoint or smear with oil; to consecrate. The person (or thing) anointed by God was called mashiach - an "anointed one" or "chosen one": Mashiach His Messiah