Platos "The Allegory of the Cave": A Summary 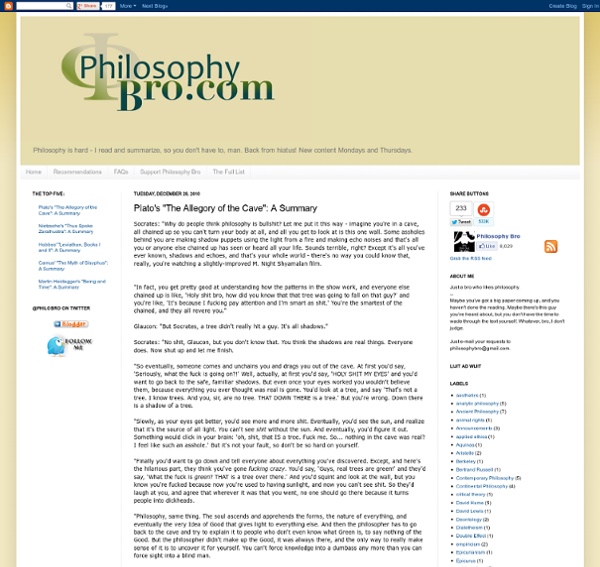 "In fact, you get pretty good at understanding how the patterns in the show work, and everyone else chained up is like, 'Holy shit bro, how did you know that that tree was going to fall on that guy?' and you're like, 'It's because I fucking pay attention and I'm smart as shit.' You're the smartest of the chained, and they all revere you." Glaucon: "But Socrates, a tree didn't really hit a guy. It's all shadows." Socrates: "No shit, Glaucon, but you don't know that. "So eventually, someone comes and unchains you and drags you out of the cave. "Slowly, as your eyes got better, you'd see more and more shit. "Finally you'd want to go down and tell everyone about everything you've discovered. "Philosophy, same thing.

The Dalai Lama's 18 Rules For Living May 6, 2011 | 42 Comments » | Topics: Life, List At the start of the new millennium the Dalai Lama apparently issued eighteen rules for living. Since word travels slowly in the digital age these have only just reached me. Here they are. Take into account that great love and great achievements involve great risk. When you lose, don’t lose the lesson. 10 Creepy Plants That Shouldn't Exist We spend a lot of time here at Cracked pointing out horrors of nature that slither on the land and lurch through the sea. But staying under the radar in nature's landscape of nightmares is the twisted carnival of things that grow out of the ground. Like ...

40 Belief-Shaking Remarks From a Ruthless Nonconformist If there’s one thing Friedrich Nietzsche did well, it’s obliterate feel-good beliefs people have about themselves. He has been criticized for being a misanthrope, a subvert, a cynic and a pessimist, but I think these assessments are off the mark. I believe he only wanted human beings to be more honest with themselves. He did have a remarkable gift for aphorism — he once declared, “It is my ambition to say in ten sentences what others say in a whole book.” A hundred years after his death, Nietzsche retains his disturbing talent for turning a person’s worldview upside-down with one jarring remark. Lucid Dream Guru - Master the Art of Lucid Dreaming DILD is an abbreviation for Dream Induced Lucid Dream. This is the most common type of lucid dream induction technique. In fact, many first timers achieve their first lucid dream through this technique. When a DILD (Dream Induced Lucid Dream) occurs, you become lucid within the dream. This can often happen when the dream is so outrageous or ridiculous that no other rational explanation can be used to explain it other than it being a dream.

Funny Anti Jokes What are Antijokes? Anti Jokes (or Anti Humor) is a type of comedy in which the uses is set up to expect a typical joke setup however the joke ends with such anticlimax that it becomes funny in its own right. The lack of punchline is the punchline. We’ve just released huge update to the iOS app! Now, access all your favorite text and photo sites like Anti-Joke, DIYLOL! A few things didn’t make the original cut (like comments) but they’ll be back soon. Timaeus (dialogue) Participants in the dialogue include Socrates, Timaeus of Locri, Hermocrates, and Critias. Some scholars believe that it is not the Critias of the Thirty Tyrants who is appearing in this dialogue, but his grandfather, who is also named Critias.[1][2][3] Timaeus begins with a distinction between the physical world, and the eternal world. The physical one is the world which changes and perishes: therefore it is the object of opinion and unreasoned sensation. The eternal one never changes: therefore it is apprehended by reason (28a).

350 Login Rage Comics 3 (350).jpg 3 (350).jpg The World As I See It - StumbleUpon "How strange is the lot of us mortals! Each of us is here for a brief sojourn; for what purpose he knows not, though he sometimes thinks he senses it. But without deeper reflection one knows from daily life that one exists for other people -- first of all for those upon whose smiles and well-being our own happiness is wholly dependent, and then for the many, unknown to us, to whose destinies we are bound by the ties of sympathy. Allegory of the Cave Plato realizes that the general run of humankind can think, and speak, etc., without (so far as they acknowledge) any awareness of his realm of Forms. The allegory of the cave is supposed to explain this. In the allegory, Plato likens people untutored in the Theory of Forms to prisoners chained in a cave, unable to turn their heads.

Get Yo’ Nails Did Okay, so we’re only three weeks in to this whole thing and I’m already showing you a tame look after I totally promised some of you that I’d do a newsprint nail tutorial this week. Newsprint we can do next week, but for right now I wanted/needed a manicure by a professional. As I told you in the first “Get Yo’ Nails Did”, it’s important to include real manicures in your nail routine if you’re not comfortable cutting your cuticles and getting into the real work at home.

Critias (dialogue) Timaeus Unlike the other speakers of the Critias, it is unclear whether Timaeus is a historical figure or not. While some classicists regard him as definitively historical,[3] others guess that "Plato's picture of him has probably borrowed traits from various quarters".[4] Frank assumes Archytas of Tarentum to be the person which Timaeus is partly based on.[5] On the other hand, F. M.