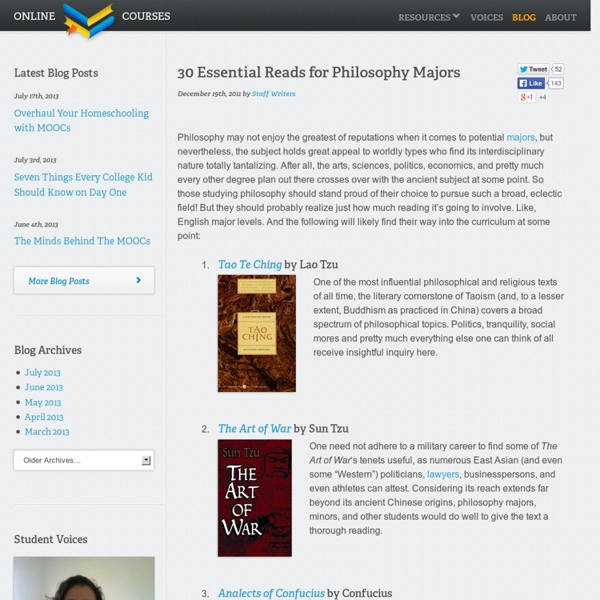 A Visual Dictionary of Philosophy: Major Schools of Thought in Minimalist Geometric Graphics by Maria Popova A charming exercise in metaphorical thinking and symbolic representation. Rodin believed that his art was about removing the stone not part of the sculpture to reveal the essence of his artistic vision. Perhaps this is what Catalan-born, London-based graphic designer Genis Carreras implicitly intended in chiseling away the proverbial philosopher’s stone to sculpt its minimalist essence. The Official Web Site of Oscar Wilde Men "No man is rich enough to buy back his past." "Good resolutions are simply checks that men draw on a bank where they have no account." "Men become old, but they never become good."-- “Lady Windermere's Fan” "I delight in men over seventy, they always offer one the devotion of a lifetime. "-- “A Woman of No Importance”

John Locke John Locke FRS (/ˈlɒk/; 29 August 1632 – 28 October 1704), was an English philosopher and physician regarded as one of the most influential of Enlightenment thinkers and known as the "Father of Classical Liberalism".[1][2][3] Considered one of the first of the British empiricists, following the tradition of Sir Francis Bacon, he is equally important to social contract theory. His work greatly affected the development of epistemology and political philosophy. His writings influenced Voltaire and Rousseau, many Scottish Enlightenment thinkers, as well as the American revolutionaries. His contributions to classical republicanism and liberal theory are reflected in the United States Declaration of Independence.[4] Life and work Locke's father, also called John, was a country lawyer and clerk to the Justices of the Peace in Chew Magna,[6] who had served as a captain of cavalry for the Parliamentarian forces during the early part of the English Civil War.

The 50 Best Blogs for Future Leaders The old adage purports that the best leaders come hurtling headfirst into the world instead of eventually learning the necessary skill sets. Maybe. Maybe not. Even the natural-born mobilizers and motivators out there could benefit from a few shots of nurture to get the ol’ noggin a-flooded with ideas. An Essay by Einstein "How strange is the lot of us mortals! Each of us is here for a brief sojourn; for what purpose he knows not, though he sometimes thinks he senses it. But without deeper reflection one knows from daily life that one exists for other people -- first of all for those upon whose smiles and well-being our own happiness is wholly dependent, and then for the many, unknown to us, to whose destinies we are bound by the ties of sympathy. A hundred times every day I remind myself that my inner and outer life are based on the labors of other men, living and dead, and that I must exert myself in order to give in the same measure as I have received and am still receiving...