The Book of Jasher 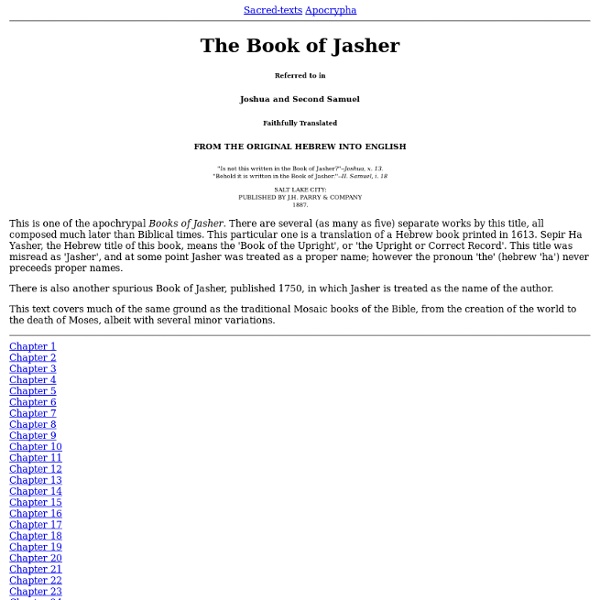 Sacred-textsApocrypha Referred to in Joshua and Second Samuel Faithfully Translated "Is not this written in the Book of Jasher?" This is one of the apochrypal Books of Jasher. There is also another spurious Book of Jasher, published 1750, in which Jasher is treated as the name of the author. This text covers much of the same ground as the traditional Mosaic books of the Bible, from the creation of the world to the death of Moses, albeit with several minor variations. Related:  yhwh truth • Philosophy

Aboriginal Hebrews Black Hebrews? The very words cause many people to grin at what appears to be simply a play on words. No one reads about such people in european authored history books and there are only a few references to "Ethiopian Jews" in white Jewish sources. Their story begins with the Patriarch Abraham (2117-1942 B.C.), a native of the Sumerian city of Ur in ancient Mesopotamia. It has been confirmed that the ancient Sumerians were akin to the modern Black Dravidians of India. This truth is grossly neglected, suppressed, and distorted in most European and American historical texts which are flavored with race prejudice. Biblical history relates that the descendants of Abraham, namely Jacob (Israel) and his twelve sons and their wives, 70 in all, migrated from Canaan to Egypt around the year 1827 B.C. This astounding number of people in so short a time can only be adequately explained by intermarriage between the family of Jacob and the native Egyptian populace. Dr.

Mozilla Firefox Start Page WWYD? What Would Yahushua Do? Bhagavad Gita - Bhagavad Gita Online - Bhagavad Gita Online Bible Study Tools Thank you for subscribing! You should begin receiving your newsletter(s) within the next 48 hours. If you signed up for a weekly newsletter, you should receive your first issue within seven days. We take extra care to avoid sending email to anyone who doesn't really want to receive it. Remember, you can unsubscribe at any time by clicking on the appropriate link at the bottom of any email you receive. To ensure uninterrupted delivery, please add our "From" address to your personal white list or address book when you receive your first issue of any newsletter or devotional. If you do not receive your subscriptions and you are using a Spam filtering service or software, it is possible that your subscriptions may be placed in the "held" or "junk mail" folders. Thanks again, and enjoy your subscriptions. Attention Gmail users: You may have noticed that your emails are now divided into separate inboxes – Primary, Social and Promotions.

Hebrew Name for God - The Messiah (Mashiach) The honor and majesty with which David tells us (Psalm 104) that GodHimself is clothed He will bestow on the Messiah. As it is said,'His glory is great in Thy salvation, honour and majesty hast Thou laid upon Him.' (Numbers Rabbah 14) Introduction Messiah in the Midrash There is a long tradition of midrash (commentary) concerning the Mashiach among the Jewish sages. From the time of creation constant reference is made in Holy Writ to Messiah and the Messianic hope of Israel. Messiah and New CreationWhen God first created the "generations" of the heavens and the earth, the word toldot (תולדות) is used (Gen. 2:4). The name "Perez" (פרץ) means "breach" (from paratz, meaning "to break through"). The Restored Vav is a picture of the Mashiach who would would descend from the "generations" of the line of Perez. To Anoint Mashach.Qal 3ms; to anoint or smear with oil; to consecrate. The person (or thing) anointed by God was called mashiach - an "anointed one" or "chosen one": Mashiach His Messiah

A Nazarene Looks at the Book of Mormon Part 1 - Nazarene Space By James Scott Trimm The Book of Mormon makes a major mistake from a Nazarene standpoint. The Book of Mormon does not represent the teachings of the Bible, but instead presents the teachings Protestant Christians have BELIEVED are in the Bible. Although the Book of Mormon, unlike the Bible, presents a continuous story line running from "Old Testament Times" through into "New Testament Times"; the Book of Mormon is still clearly dividable into "Old Testament" and "New Testament" portions. ...that our children may know the deadness of the law; and they by knowing the deadness of the law, may look forward unto that life which is in Christ, and know for what end the law was given. "...you must keep the performances and ordinances of God until the law shall be fulfilled which was given to Moses." - 2Nephi 25:27, 30 (supposedly between 559 & 545 BC) "...but I say to you, that the time shall come when it shall no more be expedient to keep the law of Moses." - Mosiah 13:27 (supposedly in 148 BC)

Zionism Research - The French Connection - Fighting Criminal Zionism YHWHYahuahTransliteration study on the Name of the MessiahSabbathMessianicNatsarimIsraelYahushuaLewWhiteFossilizedCustomsTorahNazareneIsraelPaganChristianityKipa The Transliteration of the Name What Is the Hebrew Name for JESUS? It is definitely not "JESUS". For those who want to get to the answer, we'll be skipping the Greek and Latin to find out. A Very Hairy Situation Going backward through languages, "JESUS" becomes "ESAU" in Hebrew! Many miss that the question is referring to "it", a singular identity for what people mistake to be 2 beings. Our Husband's Name is not Greek, it's Hebrew Also, the one incidence at NekemYah 8:17 is acceptable as an abbreviated form. In 216 of these, the spelling is: yod-hay-uau-shin-ayin: YAHUSHA The son of Nun (a leader of the tribe Ephraim) that we find in the concordance started out with a four-lettered name, then Mosheh changed it by adding one letter (YOD) to the beginning of his name: #1954: HAY-UAU-SHIN-AYIN (HUSHA), rendered in the KJV as “HOSHEA” (Dt. 32:44), and “OSHEA” (Num 13:16). this spelling is found 216 times, rendered in the KJV as “JOSHUA”. YOD-HAY-UAU-SHIN-UAU-AYIN, or “YAHUSHUA”. יהושע