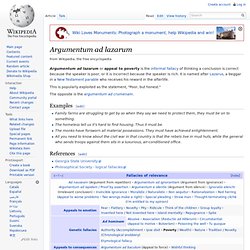 It is named after Lazarus, a beggar in a New Testament parable who receives his reward in the afterlife. This is popularly exploited as the statement, "Poor, but honest. " The opposite is the argumentum ad crumenam. Examples[edit] Family farms are struggling to get by so when they say we need to protect them, they must be on to something.The homeless tell us it’s hard to find housing. Argumentum ad lapidem. Argumentum ad lapidem (Latin: "to the stone") is a logical fallacy that consists in dismissing a statement as absurd without giving proof of its absurdity.[1] The form of argument employed by such dismissals is the argumentum ad lapidem, or appeal to the stone.[2][3] Ad lapidem statements are fallacious because they fail to address the merits of the claim in dispute. 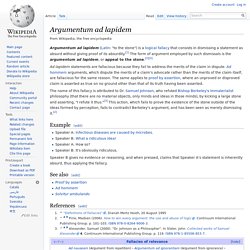 Ad hominem arguments, which dispute the merits of a claim's advocate rather than the merits of the claim itself, are fallacious for the same reason. The same applies to proof by assertion, where an unproved or disproved claim is asserted as true on no ground other than that of its truth having been asserted. The name of this fallacy is attributed to Dr. Samuel Johnson, who refuted Bishop Berkeley's immaterialist philosophy (that there are no material objects, only minds and ideas in those minds), by kicking a large stone and asserting, "I refute it thus. Argumentum ad crumenam. Anima mundi. World soul Therefore, we may consequently state that: this world is indeed a living being endowed with a soul and intelligence ... a single visible living entity containing all other living entities, which by their nature are all related.[1] Other resemblances can be found in the thoughts of hermetic philosophers like Paracelsus, and by Baruch Spinoza, Gottfried Leibniz, Friedrich Schelling and in Hegel's Geist ("Spirit"/"Mind"). 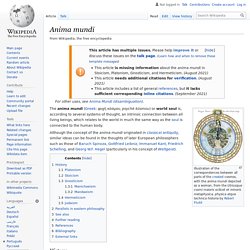 Ralph Waldo Emerson published "The Over-Soul" in 1841, which was influenced by the Hindu conception of a universal soul. There are also similarities with ideas developed since the 1960s by Gaia theorists such as James Lovelock. [citation needed] Amicus Plato, sed magis amica veritas. Amicus Plato, sed magis amica veritas is a Latin phrase, translating to "Plato is my friend, but truth is a better friend (literally: Plato is friend, but truth is more friend (to me than he is)). 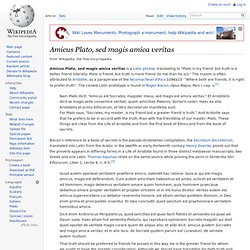 " The maxim is often attributed to Aristotle, as a paraphrase of the Nicomachean Ethics 1096a15: “Where both are friends, it is right to prefer truth”. The closest Latin prototype is found in Roger Bacon, Opus Majus, Pars I, cap. v.[1] Ad nauseam. Ad nauseam is a Latin term for a discussion that has continued so long that it has continued "to [the point of] nausea".[1][2] For example, the sentence "This topic has been discussed ad nauseam" signifies that the topic in question has been discussed extensively, and that those involved in the discussion have grown tired of it. 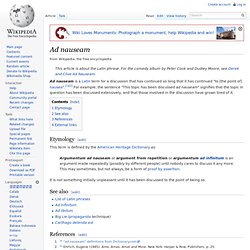 Etymology[edit] This term is defined by the American Heritage Dictionary as: A priori and a posteriori. Ab ovo. In literature[edit] The English literary use of the phrase comes from Horace's Ars Poetica, where he describes his ideal epic poet as one who "does not begin the Trojan War from the double egg" (nec gemino bellum Troianum orditur ab ouo), the absolute beginning of events, the earliest possible chronological point, but snatches the listener into the middle of things (in medias res). 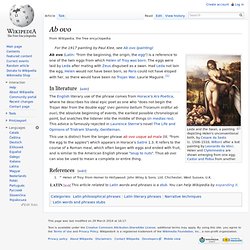 This advice is famously rejected in Laurence Sterne's novel The Life and Opinions of Tristram Shandy, Gentleman. This use is distinct from the longer phrase ab ovo usque ad mala (lit. "from the egg to the apples") which appears in Horace's Satire 1.3. It refers to the course of a Roman meal, which often began with eggs and ended with fruit, and is similar to the American English phrase "soup to nuts". References[edit] Jump up ^ Helen of Troy: From Homer to Hollywood.

Bellum omnium contra omnes. Hobbes' use[edit] Ostendo primo conditionem hominum extra societatem civilem (quam conditionem appellare liceat statum naturae) aliam non esse quam bellum omnium contra omnes; atque in eo bello jus esse omnibus in omnia.[6]I demonstrate in the first place, that the state of men without civil society (which state we may properly call the state of nature) is nothing else but a mere war of all against all; and in that war all men have equal right unto all things.[7] Later on, two slightly modified versions are presented in Libertas (liberty): [...] 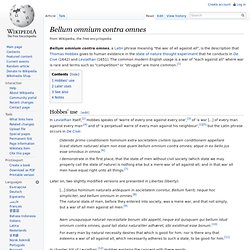 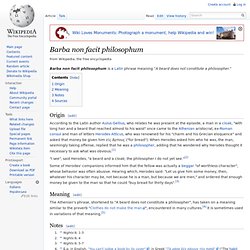 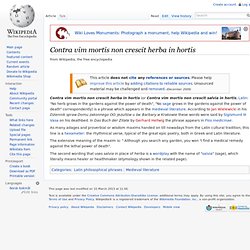 According to Jan Wielewicki in his Dziennik spraw Domu zakonnego OO. Jezuitów u św. Barbary w Krakowie these words were said by Sigismund III Vasa on his deathbed. In Das Buch der Zitate by Gerhard Hellwig the phrase appears in Flos medicinae. Conatus. Classical origins[edit] The Latin cōnātus comes from the verb cōnor, which is usually translated into English as, "to endeavor"; but the concept of the conatus was first developed by the Stoics (333–264 BCE) and Peripatetics (c. 335 BCE) before the Common Era. 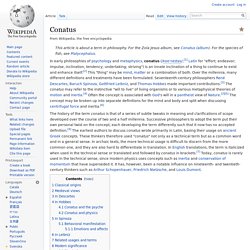 These groups used the word ὁρμή (hormê, translated in Latin by impetus) to describe the movement of the soul towards an object, and from which a physical act results.[8] Classical thinkers, Marcus Tullius Cicero (106–43 BCE) and Diogenes Laertius (c. 235 BCE), expanded this principle to include an aversion to destruction, but continued to limit its application to the motivations of non-human animals. Cogito ergo sum. Cogito ergo sum[a] (/ˈkoʊɡɨtoʊ ˈɜrɡoʊ ˈsʊm/, also /ˈkɒɡɨtoʊ/, /ˈsʌm/ Classical Latin: [ˈkoːɡitoː ˈɛrɡoː ˈsʊm], "I think, therefore I am") is a philosophical proposition by René Descartes.

The simple meaning of the Latin phrase is that thinking about one’s existence proves—in and of itself—that an "I" exists to do the thinking; or, as Descartes explains, "[W]e cannot doubt of our existence while we doubt … . " This proposition became a fundamental element of Western philosophy, as it was perceived to form a foundation for all knowledge. While other knowledge could be a figment of imagination, deception or mistake, the very act of doubting one's own existence arguably serves as proof of the reality of one's own existence, or at least of one's thought. Ceteris paribus.

Ceteris paribus or caeteris paribus is a Latin phrase meaning "with other things the same" or "all other things being equal or held constant. " As an ablative absolute, it is commonly posed to mean "all other things being equal. " A prediction or a statement about causal, empirical, or logical relation between two states of affairs is ceteris paribus via acknowledgement that the prediction can fail or the relation can be abolished by intervening factors.[1] A ceteris paribus assumption is often key to scientific inquiry, as scientists seek to screen out factors that perturb a relation of interest. Thus, epidemiologists seek to control independent variables as factors that may influence dependent variables—the outcomes or effects of interest. Likewise, in scientific modeling, simplifying assumptions permit illustration or elucidation of concepts thought relevant within the sphere of inquiry.

Causa sui. Causa sui (Latin pronunciation: [kawsa sʊi], meaning "cause of itself" in Latin) denotes something which is generated within itself. This concept was central to the works of Baruch Spinoza, Sigmund Freud, Jean-Paul Sartre, and Ernest Becker, where it relates to the purpose that objects can assign to themselves. In Freud and Becker's case, the concept was often used as an immortality vessel, where something could create meaning or continue to create meaning beyond its own life.