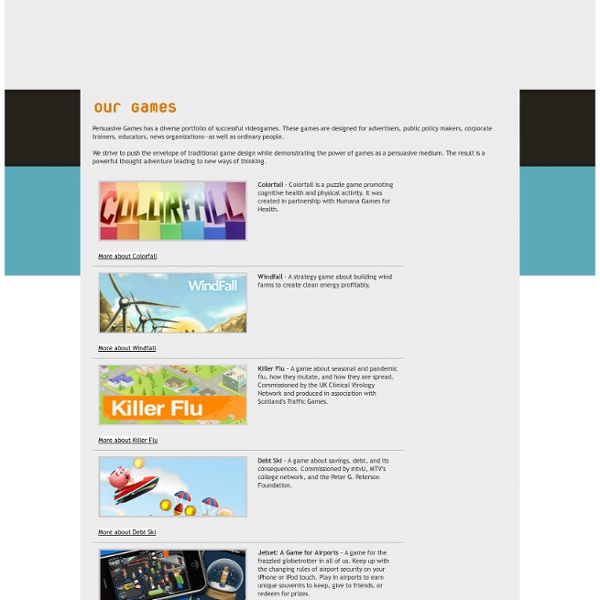 playforce.org - Playforce: Learning from the games we play The 10 political games everyone should play | Technology My Gamesblog column in this week's Technology section deals with the simmering genre of political games. Usually distributed via the internet or virally through emails, these typically short, sharp titles present real-world situations in interactive form, providing users with a unique means of engaging with contemporary issues. Some of them are pretty good fun, too. As an accompaniment to the piece, I got together with serious games specialists Ian Bogost and Gonzalo Frasca to gather 10 of the most important and/or influential titles for you to check out. Importantly, two strands seem to be developing: titles that seek to objectively inform players about a specific situation, and titles with a definite agenda. Anyway, have a look through and give one or two a go... Balance of Power "A game that took geopolitics seriously," says Frasca of Chris Crawford's 1985 strategy sim, originally released for the Apple Mac but later converted to the PC, Amiga and Atari ST.

WeTopia WeTopia, created by Sojo Studios, is an online, Facebook game that allows players to connect with friends, build their virtual city, and spend a unique form of currency called “Joy” that spreads real-world aid to various non-profits around the world. Sojo Studios, a new social enterprise founded by Lincoln Brown, created WeTopia as a way to get everyday people involved with and enjoying acts of philanthropy. A hand-selected team of veteran developers was chosen to lead this ambitious new studio. Along with them are brand partners like Mattel and Clorox, as well as 12 carefully chosen non-profits such as Save the Children, buildOn, and more. The game also launched with substantial media support by the daytime talk show host, Ellen DeGeneres. Like many other city building games, WeTopia challenges players to start a brand new community from scratch and build a thriving population and economic system. Press:FastCompany, TechCrunch, VentureBeat Funder:Privately funded Trailer:Screen shot:

Gaming education There are at least three different classes of digital games in schools. Which you prefer speaks volumes about the role you believe schools should play. The first group, the classic edu-tech games, have danced in and out of schools for so long that many kids take them for granted. Most of these programs are cute, but they fall short on pedagogical ambitions and graphic design. That doesn’t make them worthless; it just limits their effectiveness. By contrast, a handful of educators a few years ago sought to put game controls directly into students’ hands by teaching them how to build their own games. And now comes what I would dub a third approach, something that has picked up its very own buzzword before it has even reached most school gates: gamification. Most games are naturally social, which means gamification depends on that other ubiquitous web trend, social networking. Academics are creating a skin of respectability for gamification. The Scratch camp is more about empowerment.