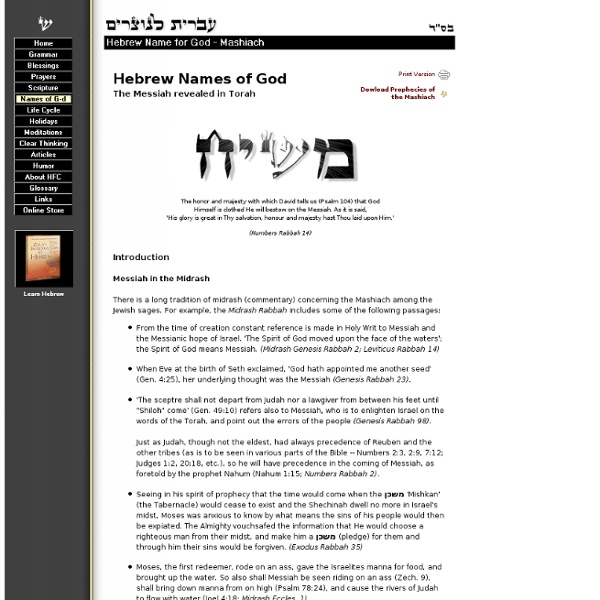 The honor and majesty with which David tells us (Psalm 104) that GodHimself is clothed He will bestow on the Messiah. As it is said,'His glory is great in Thy salvation, honour and majesty hast Thou laid upon Him.' (Numbers Rabbah 14) Introduction Messiah in the Midrash There is a long tradition of midrash (commentary) concerning the Mashiach among the Jewish sages. From the time of creation constant reference is made in Holy Writ to Messiah and the Messianic hope of Israel. Messiah and New CreationWhen God first created the "generations" of the heavens and the earth, the word toldot (תולדות) is used (Gen. 2:4). The name "Perez" (פרץ) means "breach" (from paratz, meaning "to break through"). The Restored Vav is a picture of the Mashiach who would would descend from the "generations" of the line of Perez. To Anoint Mashach.Qal 3ms; to anoint or smear with oil; to consecrate. The person (or thing) anointed by God was called mashiach - an "anointed one" or "chosen one": Mashiach His Messiah Related:  yhwh truth • Philosophy

YHWHYahuahTransliteration study on the Name of the MessiahSabbathMessianicNatsarimIsraelYahushuaLewWhiteFossilizedCustomsTorahNazareneIsraelPaganChristianityKipa The Transliteration of the Name What Is the Hebrew Name for JESUS? It is definitely not "JESUS". For those who want to get to the answer, we'll be skipping the Greek and Latin to find out. A Very Hairy Situation Going backward through languages, "JESUS" becomes "ESAU" in Hebrew! Try to follow the logic here; we're going to use the same logical flow, only in reverse: Whenever we see discussions on the difference between "Yahusha" and "Jesus", it's important to realize it is somewhat like comparing apples with oranges. One is Hebrew, the other Greek. Many miss that the question is referring to "it", a singular identity for what people mistake to be 2 beings. Our Husband's Name is not Greek, it's Hebrew Also, the one incidence at NekemYah 8:17 is acceptable as an abbreviated form. In 216 of these, the spelling is: yod-hay-uau-shin-ayin: YAHUSHA #1954: HAY-UAU-SHIN-AYIN (HUSHA), rendered in the KJV as “HOSHEA” (Dt. 32:44), and “OSHEA” (Num 13:16). YOD-HAY-UAU-SHIN-UAU-AYIN, or “YAHUSHUA”.

The Book of Jasher Sacred-textsApocrypha Referred to in Joshua and Second Samuel Faithfully Translated "Is not this written in the Book of Jasher?" This is one of the apochrypal Books of Jasher. There is also another spurious Book of Jasher, published 1750, in which Jasher is treated as the name of the author. This text covers much of the same ground as the traditional Mosaic books of the Bible, from the creation of the world to the death of Moses, albeit with several minor variations. WWYD? What Would Yahushua Do? Scientific Facts in The Bible Also See Scientists are now finding that the universe in which we live is like a diamond studded Rolex, except the universe is even more precisely designed than the watch. In fact, the universe is specifically tweaked to enable life on earth. Anthropic Principles Contrast the information on this page with the scientific knowledge of the Qur’an. For example Sura 18:86 states "Until, when he reached the setting of the sun, he found it set in a spring of murky water: See Errors in The Qur’an, which Contradict Secular and Scientific Data “When studying the science of the ancient world, one is more apt to be impressed with its ignorance than to admire its accuracy. Examples of the more striking scientific accuracy in the Bible include The UniverseTime and SpaceThe BeginningAn Initial VoidAn Expanding UniverseSpace is EmptyThat Hole In The NorthAir Has WeightThose Singing StarsAnd There are Quite a Few of Them The OceansThe Paths Of The SeasMountains Under The SeasSprings Under The Seas Adding ...

Aboriginal Hebrews Black Hebrews? The very words cause many people to grin at what appears to be simply a play on words. No one reads about such people in european authored history books and there are only a few references to "Ethiopian Jews" in white Jewish sources. Yet Black Hebrews have existed since biblical times. In fact, they are the original or proto-typical Hebrews. Their story begins with the Patriarch Abraham (2117-1942 B.C.), a native of the Sumerian city of Ur in ancient Mesopotamia. It has been confirmed that the ancient Sumerians were akin to the modern Black Dravidians of India. This truth is grossly neglected, suppressed, and distorted in most European and American historical texts which are flavored with race prejudice. Biblical history relates that the descendants of Abraham, namely Jacob (Israel) and his twelve sons and their wives, 70 in all, migrated from Canaan to Egypt around the year 1827 B.C. The biblical Hebrews were indistinguishable from native Egyptians and Ethiopians. Dr.