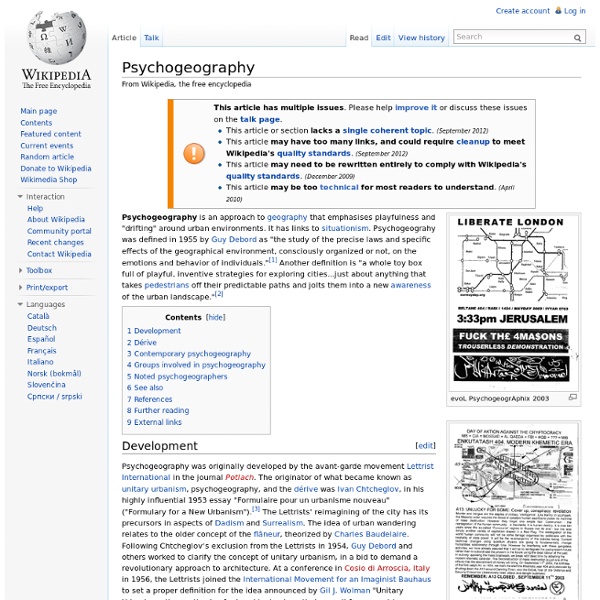 Spatial analysis Spatial analysis or spatial statistics includes any of the formal techniques which study entities using their topological, geometric, or geographic properties. Spatial analysis includes a variety of techniques, many still in their early development, using different analytic approaches and applied in fields as diverse as astronomy, with its studies of the placement of galaxies in the cosmos, to chip fabrication engineering, with its use of 'place and route' algorithms to build complex wiring structures. In a more restricted sense, spatial analysis is the techniques applied to structures at the human scale, most notably in the analysis of geographic data. Complex issues arise in spatial analysis, many of which are neither clearly defined nor completely resolved, but form the basis for current research. The most fundamental of these is the problem of defining the spatial location of the entities being studied.

Hypergraphy Hypergraphy, also called hypergraphics and metagraphics, is a critical method developed by the Lettrist movement in the 1950s, which encompasses a synthesis of writing and other forms of media.[1] Isidore Isou, the founder of Lettrism, said that "Metagraphics or post-writing, encompassing all the means of ideographic, lexical and phonetic notation, supplements the means of expression based on sound by adding a specifically plastic dimension, a visual facet which is irreducible and escapes oral labelling.. 20 more awesomely untranslatable words from around the world If only you could use these words in Scrabble. Photo: Jeremy Mates When linguists refer to “untranslatable” words, the idea is not that a word cannot somehow be explained in another language, but that part of the essence of the word is lost as it crosses from one language to another. This often is due to different social and cultural contexts that have shaped how the word is used. In the novel Shame, Salman Rushdie’s narrator suggests: “To unlock a society, look at its untranslatable words.”

Post-structuralism Post-structuralism is a label formulated by American academics to denote the heterogeneous works of a series of mid-20th-century French and continental philosophers and critical theorists who came to international prominence in the 1960s and '70s.[1][2][3] A major theme of post-structuralism is instability in the human sciences, due to the complexity of humans themselves and the impossibility of fully escaping structures in order that we might study them. Post-structuralism is a response to structuralism. Structuralism is an intellectual movement developed in Europe from the early to mid-20th century. Theory[edit] General practices[edit] The author's intended meaning is secondary to the meaning that the reader perceives.

Pattern recognition Pattern recognition algorithms generally aim to provide a reasonable answer for all possible inputs and to perform "most likely" matching of the inputs, taking into account their statistical variation. This is opposed to pattern matching algorithms, which look for exact matches in the input with pre-existing patterns. A common example of a pattern-matching algorithm is regular expression matching, which looks for patterns of a given sort in textual data and is included in the search capabilities of many text editors and word processors. In contrast to pattern recognition, pattern matching is generally not considered a type of machine learning, although pattern-matching algorithms (especially with fairly general, carefully tailored patterns) can sometimes succeed in providing similar-quality output to the sort provided by pattern-recognition algorithms. Overview[edit] Probabilistic classifiers[edit]

A-level Critical Thinking CRITICAL THINKING REVISION NOTES[edit] Credibility of evidence[edit] Argument: A proposal/conclusion supported by a reason or reasons.Evidence: Information that supports an argument.Credibility: The believability of information.* The Workshop for Non-Linear Architecture The Workshop for Non-Linear Architecture (WNLA) was the name taken by a group of experimental artists and psychogeographers active in Britain (sections existed in both Glasgow and London) during the 1990s. Informed to a large degree by the urban practices of the Paris based Lettriste Internationale (1952–57), the workshop focused its practise on developing the lettrist theory of Unitary Urbanism through physical research and behavioural intervention; redefining the psychogeographical terrain of the cityscape in relation to its emotive resistivity. During the two year 'Psychogeographical Survey of Glasgow' (1992–94) the group concentrated its activity on refining the interplay between the Letterist (and later situationist) techniques of derive and constructed situation. While the Workshop For A Non-Linear Architecture has received little press this is due to the WNLA's indifference towards media coverage rather than a matter of policy. Notes and references[edit]