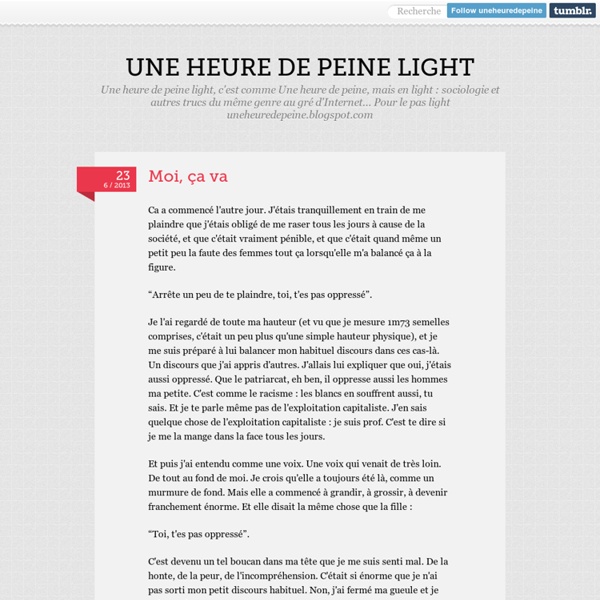 What Makes Call-Out Culture So Toxic Asam Ahmad By Asam Ahmad / briarpatchmagazine.com Call-out culture refers to the tendency among progressives, radicals, activists, and community organizers to publicly name instances or patterns of oppressive behaviour and language use by others. Righteous Callings: Being Good, Leftist Orthodoxy, and the Social Justice Crisis of Faith “Ideology is a sick fetish” — Porpentine Charity Heartscape Deep down, I have always believed that I’m a bad person and that the world we live in is an awful place. Maybe that’s just what happens when you grow up an effeminate boy (and secretly a trans girl) in a Chinese-Canadian Christian-ish (not religious enough to go to church but enough for threat of eternal damnation to be used as a motivator to do household chores) family with class trauma and inherited mental health issues, you know?

The book that made me a feminist Margaret Atwood Grimms’ Fairy Tales and all the Andrew Lang collections: there are a lot of intrepid female protagonists to choose from in these folk tales, which I read voraciously. The odds are stacked against them, but they win through. Sometimes they have magical help; sometimes they use common sense, intelligence and disguise, as in “Fitcher’s Bird”, in which a clever girl bests a maiden-stealing wizard. Margaret Atwood’s novels The Handmaid’s Tale and Alias Grace were both televised this year. Mary Beard