How to Write a Script Outline 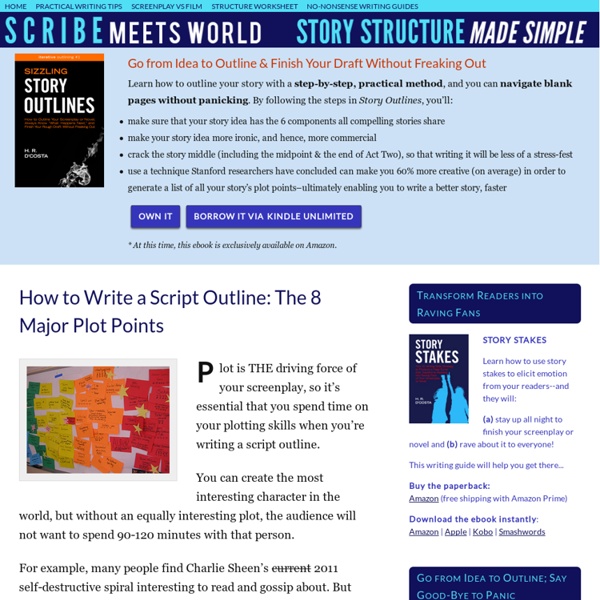 Plot is THE driving force of your screenplay, so it’s essential that you spend time on your plotting skills when you’re writing a script outline. You can create the most interesting character in the world, but without an equally interesting plot, the audience will not want to spend 90-120 minutes with that person. For example, many people find Charlie Sheen’s current 2011 self-destructive spiral interesting to read and gossip about. But would they want to spend an hour and a half of their lives watching him swill alcohol, do drugs, and oogle women? I think not. But give Charlie boy a goal–perhaps to rejoin TWO & A HALF MEN, the successful sitcom he was kicked off of–while he overcomes his addiction to alcohol, drugs, & women… …and that, people might watch because they’ll want to know if he can pull it off. Since you want to know how to write a script outline, let me clue you into the dirty little secret about plot: With rare exception, all movies have the SAME structure. What do you think? Related:  Writing Plot Structure • Writing

Outlining your novel: a method. » A.J. Hartley Ok, let’s start by saying what this isn’t: it’s not a post about why you should outline rather than write by the seat of your pants (and it would be great if we could stay away from that particular debate in the comments). It’s also not about how you should outline your novel. It’s about how I happen to do it. At Magical Words we often say that there are many different ways to approach writing and that not all methods work for all writers. This post is going to be a case in point. As I’ve said before, I used to be a pantser, but found that my books often lacked a tightness and sense of purpose because I had a hard time getting enough distance from the first draft to really knock it into shape. But opting to outline a book doesn’t present a single formula to work by. I don’t work like that. Some authors talk of their outlines as if they are blueprints which nail down every feature of the final book or roadmaps which outline a journey, but permit some deviation along the way.

All Is Lost: 3 Keys to the Pefect Act II Ending | Screenplay Structure Tell me the truth. Between the beginning, middle, and end of your screenplay, which is the hardest to write? The middle, right? The middle of your story stretches out like a vast expanse of blank pages. But blank pages from Act Two are downright terrifying. One way to tackle this problem is to figure out how Act Two ends, aka your hero’s “all is lost moment.” So what’s the key to creating the perfect “all is lost” moment? Craft a painful, emotionally charged series of scenes which somehow brings your hero closer to his goal…even though, on the surface, he appears to be the furthest from it. Those three essentials—pain, emotion, and paradox—are basically all you need to create a second act ending which is effective and powerful. Combined, each of these elements re-engages audiences, right when their interest is about to flag. So, let’s examine these “all is lost” essentials more in depth, shall we? Act Two Ending Essential #1: Pain As a writer, you’re probably inclined to be kind to your hero.

Your Novel Blueprint Take advantage of our Instructor of the Month deal and get all of Karen Wiesner’s bestselling books on writing (& more) for one heavily discounted price.Order Now >> Writing a novel and building a house are pretty similar when you think about it. For instance, most builders or homeowners spend a lot of time dreaming about their ideal houses, but there comes a time when they have to wake up to the reality of building by analyzing what they expect from a house, and whether the plans they’ve selected will meet their needs. This is where a home plan checklist comes in handy. This is where a Story Plan Checklist becomes essential, because it targets the key considerations necessary when building a cohesive story that readers will find unforgettable. The Story Plan Checklist can ensure cohesion between character, setting and plot. • Working Title • Working Genre(s) • Working Point-of-View Specification • High-Concept Blurb • Story Sparks • Estimated Length of Book/Number of Sparks

Screenwriting Tips The midpoint is the most arguable of the story points in the classic three act structure. It’s the axis upon which the second act revolves, it clarifies the arc, the stakes, and the tone of the exploration of the script. Midpoints are incredibly useful, so they’re worth talking about. The second act takes up 50% percent of a scripts length. Your basic three act structure: ACT 1 (25%): Set up the world and characters, explain how we got to the events of the story. Story Structure, Script Outlines, Screenplay Writing | Scribe Meets World How to Structure A Story: The Eight-Point Arc By Ali Hale - 3 minute read One of my favourite “how to write” books is Nigel Watts’ Writing A Novel and Getting Published. My battered, torn and heavily-pencil-marked copy is a testament to how useful I’ve found it over the years. Although the cover appears to be on the verge of falling off altogether, I’ve risked opening the book once more to bring you Watts’ very useful “Eight-Point Story Arc” – a fool-proof, fail-safe and time-honoured way to structure a story. (Even if you’re a short story writer or flash fiction writer rather than a novelist, this structure still applies, so don’t be put off by the title of Watts’ book.) The eight points which Watts lists are, in order: StasisTriggerThe questSurpriseCritical choiceClimaxReversalResolution He explains that every classic plot passes through these stages and that he doesn’t tend to use them to plan a story, but instead uses the points during the writing process: So, what do the eight points mean? Stasis Trigger The quest Surprise Climax Reversal

Creative Writer - Plotting a thriller Last month I wrote on the importance of plot. This time round I will take that discussion a step further and look at a genre where plot is paramount — the thriller. What makes a good thriller? Broadly speaking, plots can be placed in one of two categories — the siege narrative and the quest narrative. The Day of the Jackal begins in the early 1960s as a quest narrative, where a professional assassin codenamed the Jackal is hired by the Organisation de l'armee secrete (OAS), a right-wing French terrorist organisation committed to killing the then French president Charles de Gaulle for granting independence to Algeria. Narrative transformation As the novel proceeds, however, it transforms from a quest narrative into more of a siege narrative as the French secret service get wind of the plot to murder the president and start hunting the Jackal. What makes The Day of the Jackal a stellar piece of writing is that we all know the Jackal's quest is doomed to fail right from the outset.

The Black List Vs. Inktip - Should I use one, both, or neither? Prior to about a decade ago, whether or not to upload your screenplay to an online service like Inktip, or a forum, paid or otherwise, was a decision that no screenwriter had to make. There simply was no point to do so, other than for us to share our work via email or in discussion boards, should we be so bold. But now, uploading our screenplay to a website is a matter of course. So what’s a screenwriter to do? Is getting your screenplay out onto the web a bad thing? But first, I’ll share some tips on keeping your ideas safe and your intellectual property protected when sending your screenplay out into the wild west of the internet or to any script directory or service that promises the potential of exposure. Written just one script ever? Some screenwriters work on a single screenplay for decades. Got a completely mind-blowing concept? If you believe you’ve got a concept that Hollywood would die for, you might want to keep that one private as well. Watermark your screenplay 3) Crickets.

Five Rules for Writing Thrillers - David Morrell Thrillers have never been more popular. On the New York Times fiction bestseller lists, over half are often filled with examples of the genre. Thrillers even have their own organization, International Thriller Writers (which I co-founded with Gayle Lynds). But thrillers didn’t always have this presence. Back in 1972, when my debut novel, First Blood, introduced the character of Rambo, bestseller lists favored a mix of literary, sentimental, and historical fiction as well as the sort of celebrity gossip novels that we identify with Harold Robbins and Jacqueline Susann. Not that thrillers were entirely absent. If you’re a writer who’s thinking of going in this direction, here are five pieces of advice that might help. NUMBER ONE: KNOW YOUR MOTIVESHave a good reason for writing a thriller. I remained sane by imagining stories in which I was a hero overcoming adversity. By contrast, if you’re merely writing thrillers because they’re currently popular, you ought to think twice.

Learn Useful Expressions in English | International House Bristol Check out IH Bristol’s extensive list of over 1000 of the most useful expressions in English, available for free for Beginner/Elementary students to Advanced speakers. Learning English is one of the best ways to improve your life and the prospects of getting a good job. English is used all over the world as the language of education and business and it is becoming normal to expect everybody to be able to speak it. IH Bristol has more than 30 years’ experience of teaching English as a foreign language, of helping students to pass Cambridge Exams, to achieve the right score in IELTS or OET or just to learn to communicate more effectively in the language. However, not everybody can come to Bristol to learn in person. How to use the Useful Expressions 1. We’ve covered a wide range of everyday situations, and for each one there are 10 common phrases with explanations of how or when you would use each one. The more you use them, the more you will improve!