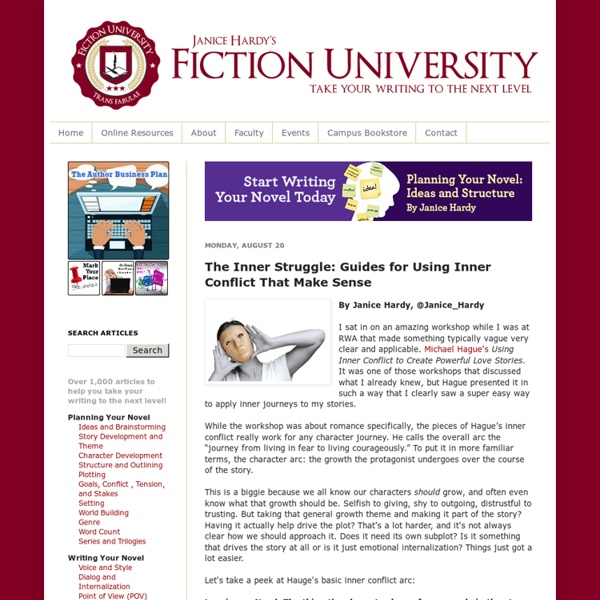 By Janice Hardy, @Janice_Hardy I sat in on an amazing workshop while I was at RWA that made something typically vague very clear and applicable. Michael Hague's Using Inner Conflict to Create Powerful Love Stories. It was one of those workshops that discussed what I already knew, but Hague presented it in such a way that I clearly saw a super easy way to apply inner journeys to my stories. While the workshop was about romance specifically, the pieces of Hague’s inner conflict really work for any character journey. Let's take a peek at Hauge's basic inner conflict arc: Longing or Need: The thing the character longs for or needs in the story. If this doesn’t say “inner goal” I don’t know what does. (More on goals here) Wound: A past wound or hurt that is a current unhealed source of pain. The wound might be some deep dark secret, or it can be how the character grew up. (More on backstory here) Belief: What the character believes due to the wound. Hague used Shrek as an example.

Physical Descriptions - List of Hair Colors Hair Color List (Note: an updated and expanded version of this list appears in my 15K-word book How to Describe Hair and Skin. See below.) [First, my profound apologies to the vast majority of readers who don't steal content, but I have to state the following. I'll admit it – hair colors are fun, even for someone like me who advocates keeping description to a minimum. Natural human hair color comes in these basic shades: blond(e), red, light brown, dark brown, black, gray, white. Don't forget about highlights! What are the nouns that apply to people with certain hair colors? Also, sometimes words pick up additional shades of meaning over time that are irrational but exist, and you won't find these connotations listed in the dictionary. Please check for frequent updates to this list! Blond – ash Blond – bronze.

Medieval Names - List of Medieval Names Character Flaw Index To make characters realistic and relatable they are given flaws, because if there is anything a writer can be sure of it is that no one in their audience will be perfect. Flaws are character traits that have a negative impact in the narrative, unless they are simply informed. They can also be exploited. See Good Flaws, Bad Flaws for a scale of flaw acceptability. Abusive Parents: Habitually violent and cruel to their own children, often because that's how they themselves were raised.