The 4 Story Structures that Dominate Novels 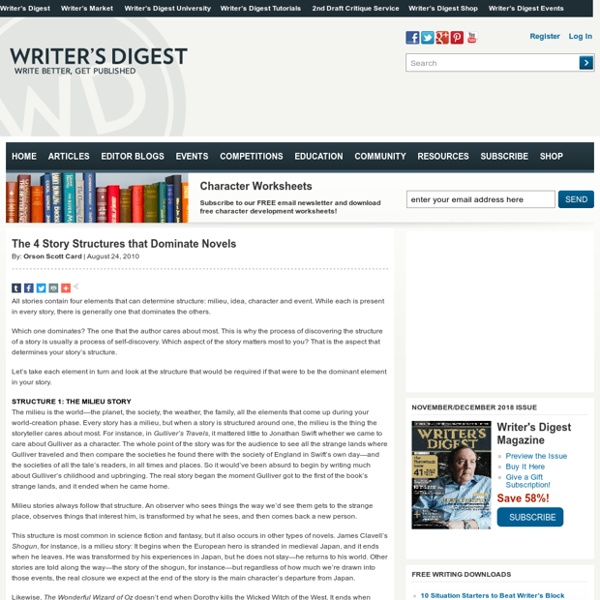 All stories contain four elements that can determine structure: milieu, idea, character and event. While each is present in every story, there is generally one that dominates the others. Which one dominates? The one that the author cares about most. This is why the process of discovering the structure of a story is usually a process of self-discovery. Let’s take each element in turn and look at the structure that would be required if that were to be the dominant element in your story. STRUCTURE 1: THE MILIEU STORY The milieu is the world—the planet, the society, the weather, the family, all the elements that come up during your world-creation phase. Milieu stories always follow that structure. This structure is most common in science fiction and fantasy, but it also occurs in other types of novels. Likewise, The Wonderful Wizard of Oz doesn’t end when Dorothy kills the Wicked Witch of the West. Most mysteries follow this structure. Take, for example, the Indiana Jones movies.

Write Fiction that Grabs Readers from Page One In your novel, the inciting incident is the first sign of trouble for your protagonist: it’s the catalyst, the chemical reaction, that sets the plot into motion. But the inciting incident isn’t only important for your main character. Understanding how to harness it is also crucial to hooking your reader from the very first page and immediately investing them in the experiences, emotions, and personal struggles of the character. In this excerpt from Hooked: Write Fiction That Grabs Readers at Page One and Never Lets Them Go by Les Edgerton, you’ll discover that the inciting incident can be used as a trigger to focus the reader on the character’s journey and retain his or her interest throughout the rest of the novel. The Inciting Incident as a Trigger The inciting incident is the crucial event—the trouble—that sets the whole story in motion. Notice that this isn’t a point-by-point outline of a plot. The story begins with a bit of necessary setup, giving a scrap of family history.

Hint Fiction Contest, Judged By Stewart O’Nan (2009) In the last two weeks of April 2009, I hosted a Hint Fiction Contest at my blog. Writers could submit two stories each. They could be either original or reprints. First place winner: HOUSE HUNTING by Gary A. The fence is tall. Second place winner: DEPARTURE by Donora Hillard The terminal is unkind. Third place winner: PROGRESS by Joe Schreiber After seventeen days she finally broke down and called him “daddy.” Honorable Mentions: PEANUT BUTTER by Camille Esses He was allergic. THE MALL by Robley Wilson What he liked best about the affair was not the shopping, but parting the tissue wrap to remove the clothing that had first enticed her. A SNAP DECISION by Jamie Felton Her finger tapped against her teeth. And the other 14 finalists: PHILIP by Jason RiceWAITING by Brendan O’BrienTHE MAN OF TOMORROW OR MAYBE YOU’VE HEARD THIS ONE BEFORE, BUT YOU’VE NEVER HEARD IT LIKE THIS by Will PanzoUNTITLED by Samuel J.

How to Make Your Novel a Page Turner When my father was a little boy, one of the last of the touring vaudeville companies came through his podunk town, and he got to see the show. The centerpiece was a one-act drama featuring a pretty girl in peril. The climactic scene began quietly, with her sitting next to a lamp, sewing. As the mustachioed villain sneaked onstage, the audience began to murmur in alarm. When the lovely young thing gave no sign of sensing the danger, the audience’s murmuring gained urgency and volume. The innocent girl continued to sew her apron. Closer crept the villain, drawing a knife from his coat. In full voice now, the audience warned her: “Behind you. When, incredibly, she bowed her vulnerable neck more deeply over her work, they rose from their seats, cupped their hands around their mouths, and shouted with the utmost diction: “Beee! Unbearable suspense. Ah, to be a master of it. I used to beg my dad to tell that story, and I’d laugh maniacally every time. PLOT FROM THE GUT. Now what? WHAT IS AN HCM?

How to Stay Inspired (for Writers and Artists): 12 steps (with pictures) Edited by AJ Knight, Krystle, Amanda, Brendan and 11 others Creative inspiration is magical when you have it and frustrating when you don't. For anyone who has had writer's block, who struggles with agent rejections, or who has thrown in the paintbrush, here are some fresh perspectives on what creativity really means. Art is a passion that has many forms of expression. Invite the Muse to not only visit but to stay a while! Ad Steps 1Go to writing or art critique groups. 12And the most important words to inspire you are: Just do it. Tips Re-think your eating habits.

Wired 14.11: Very Short Stories 33 writers. 5 designers. 6-word science fiction. Page 1 of 1 We'll be brief: Hemingway once wrote a story in just six words ("For sale: baby shoes, never worn.") and is said to have called it his best work. So we asked sci-fi, fantasy, and horror writers from the realms of books, TV, movies, and games to take a shot themselves. Dozens of our favorite auteurs put their words to paper, and five master graphic designers took them to the drawing board. Failed SAT. Computer, did we bring batteries? Vacuum collision. Gown removed carelessly. Automobile warranty expires. Machine. Longed for him. His penis snapped off; he’s pregnant! From torched skyscrapers, men grew wings. - Gregory Maguire Internet “wakes up?” With bloody hands, I say good-bye. - Frank Miller Wasted day. “Cellar?” Epitaph: Foolish humans, never escaped Earth. - Vernor Vinge It cost too much, staying human. - Bruce Sterling We kissed. It’s behind you! I’m your future, child. 1940: Young Hitler! I’m dead. The baby’s blood type?

Behavior, Bird Identification Skills, Bird ID There’s what birds wear, and then there’s how they wear it. A bird’s attitude goes a long way in identification. Bird species don’t just look unique, they have unique ways of acting, moving, sitting, and flying. When you learn these habits, you can recognize many birds the same way you notice a friend walking through a crowd of strangers. Chances are, you’ll never see a Cedar Waxwing poking through the underbrush for seeds – or a Wood Thrush zigzagging over a summer pond catching insects. Because so much of a bird’s identity is evident in how it acts, behavior can lead you to an ID in the blink of an eye, in bad light, or from a quarter-mile away. And remember that to get good at recognizing birds by their behavior, you must spend time watching them. Posture The most basic aspect of behavior is posture, or how a bird presents itself. OrioleLong, slender birds that tend to perch horizontally. Illustrations © Susan Spear/John Schmitt/CLO Movement Flight Pattern Feeding Style Flocking

youngwritersproject.org | Create. Learn. Publish. Connect. Read. Mindmap Make Your Writing Stronger We are all apprentices in a craft where no one ever becomes a master. ~Ernest Hemingway How strong is your writing? No matter how good you think it is, there’s always room for improvement. In most cases, plenty of room. (***By the way, have you seen this amazing online creative writing course, “Story Is a State of Mind,” created by Giller finalist Sarah Selecky? Want to strengthen your story, empower your performance, and beef up on the publishing business? Here are 23 sites (in no particular order) I look to for daily inspiration and advice: PS If you find this list useful, please share it on Twitter, Facebook or StumbleUpon – I’d really appreciate it! 4) Query Shark A query critique site you don’t want to miss. 5) Men with Pens Fantastic articles on copywriting and freelancing. 6) Ask Allison Writing and publishing Q&A by novelist Allison Winn Scotch. 10) Pub Rants Self-proclaimed “very nice literary agent,” Kristin Nelson, rants about writing and publishing.

What makes a hero? - Matthew Winkler The Hero Archetype in Literature, Religion, and Popular Culture: (along with a useful PowerPoint presentation teachers can download at this URL: )Maricopa Center for Learning and Instruction (users embark on their own hero's journey): American Masters Lesson from PBS for Teachers on George Lucas, the Power of Myth, and the Hero's Journey: an interactive approach to the Hero's Journey: of course, information about Joseph Campbell's works on the subject, on the Joseph Campbell Foundation site:The Hero With A Thousand Faces Hero's Journey (semi-biographical film):