Damn it Neil, the name is Nuwanda. 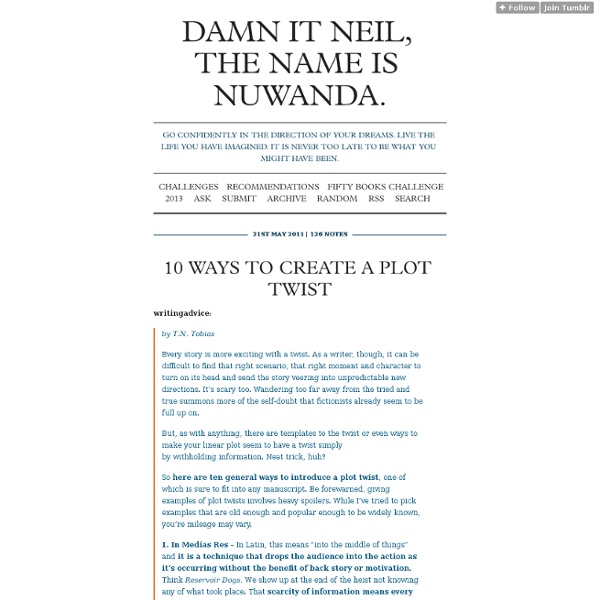 3 Types of Character Arcs: Choose the Best for Your Novel How Does Your Character Change? You know your character must change somehow over the course of your novel. But how? And more than that, how do you sync the changes with the external plot? The middle of a novel can suffer from the dreaded “sagging middle” and it’s mainly because you don’t have a firm handle on the character’s inner arc and how it meshes with external events. I’ve found three approaches to the inner arc, each trying to laying out how the character changes. Hero’s Journey: Quest for Inner Change In the Hero’s Journey, laid out so well in Christopher Vogler’s book, The Writer’s Journey, a character receives a Call to Adventure that takes him/her out of the normal and ordinary world into a world where they must quest for something. Melanie as an Example So, we’ve got Melanie who wants more than anything else to get her mother’s approval, but can’t because her mom’s a chef and Melanie can’t cook worth a flip. Iron Sharpens Iron – Friendships Back to Melanie: Flawed Way of Coping

Write a Plot Outline: Infographic | Now Novel Learning how to write a plot outline is an essential skill if you want to become a prolific author. Whether you find the distant target of reaching a substantial word length or the creation of a satisfying, forward-moving plot daunting, if you write a plot outline for your novel in advance you will have a blueprint that you can alter if necessary as you go. Our previous post on the subject suggested 7 ways you can outline your novel. We’ve since converted this information into the handy infographic below. Click image to view full size Once you have your outline written, the matter of writing your first draft remains. The Hero’s Journey Kansas University’s Gunn Center for the Study of Science Fiction has a useful page featuring a number of infographics that expand on the mythologist Joseph Campbell’s plot structure theory, ‘The Hero’s Journey’. 10 Rules for Writing First Drafts Click the button below for free top tips for writing a novel Embed This Image On Your Site (copy code below):

Automatic Plot Generator Monomyth Joseph Campbell's monomyth, or the hero's journey, is a basic pattern that its proponents argue is found in many narratives from around the world. This widely distributed pattern was described by Campbell in The Hero with a Thousand Faces (1949).[1] Campbell, an enthusiast of novelist James Joyce, borrowed the term monomyth from Joyce's Finnegans Wake.[2] Campbell held that numerous myths from disparate times and regions share fundamental structures and stages, which he summarized in The Hero with a Thousand Faces: A hero ventures forth from the world of common day into a region of supernatural wonder: fabulous forces are there encountered and a decisive victory is won: the hero comes back from this mysterious adventure with the power to bestow boons on his fellow man.[3] A chart outlining the Hero's Journey. Summary[edit] In a monomyth, the hero begins in the ordinary world, and receives a call to enter an unknown world of strange powers and events. The 17 Stages of the Monomyth[edit]

Beat Sheet: Pride and Prejudice | The Flick Chicks Chick 1 says: I thought for our second beat sheet we’d look at a story as far from Hot Fuzz as possible. So I chose Pride and Prejudice, the 2005 version starring Keira Knightley and Matthew Macfadyen and directed by Joe Wright. I admit it was more difficult to pick out the beats in this than Hot Fuzz and sometimes I’m not completely sure they were there at all. Opening Image – A visual that represents the struggle & tone of the story. - Elizabeth Bennett wandering through the grounds reading, content with herself and her life. Set-up – Expand on the “before” snapshot. - We meet Elizabeth’s family; her older, beautiful and sensible sister, her equally sensible but henpecked father and her very silly mother and three younger sisters. Theme Stated (happens during the Set-up) – What your story is about; the message, the truth. The theme is stated clearly by Jane to Lizzie at the common ball. Catalyst – The moment where life as it is changes. - Elizabeth meets Mr. - Due to Mrs.

Plot and Story A plot is not a story, nor does every story have a strong plot. Good writers know the importance of both plot and story, especially before they dare to write a story with a “weak” or “thin” plot. Any plot can feature a love story; that illustrates the difference. Plots are events, stories reveal how characters react to those events. Because the writers, editors, publishers, and producers with whom we work target mass market audiences, we make no apologies for what might seem a formulaic approach to story structure. Producers and publishers know that audiences have expectations writers need to meet. Structure is Not Story Do not confuse traditional (or nearly traditional) plotting and story structure with formulaic storytelling. Poetry in most cultures adheres to various structures: hiaku and sonnets are two examples. Traditions Cultural traditions dictate audience expectations, and therefore guide storytellers. Experimental Works Plot The plot is sometimes called the “spine” of a story.

6 Ways to Create Riveting Conflict in Your Story Who says conflict is a bad thing? Who says world peace is the most important goal of humanity? Who says arguing with your little brother when you’re a kid means you’ll grow up to be an ill-mannered ruffian? Not a writer, that’s for sure! Arguably, the single most important tenet of fiction can be summed up in the saw “no conflict, no story.” You can break every rule in the book (pun intended) and still have a whopper of a tale—so long as you remember to throw a dash of conflict in your story. The simple fact is: fiction has its very basis in conflict. So how does one go about manufacturing this most precious of story ingredients? 1. This is the easiest (and, often, the best) way to throw a little conflict in your story. 2. Many stories base their entire premise on this idea (think of the Pevensie siblings tumbling through the wardrobe into Narnia in C.S. 3. 4. 5. 6. Stories are about balance. Tell me your opinion: What is the chief source of conflict in your story?