How to tell a great story, visualized 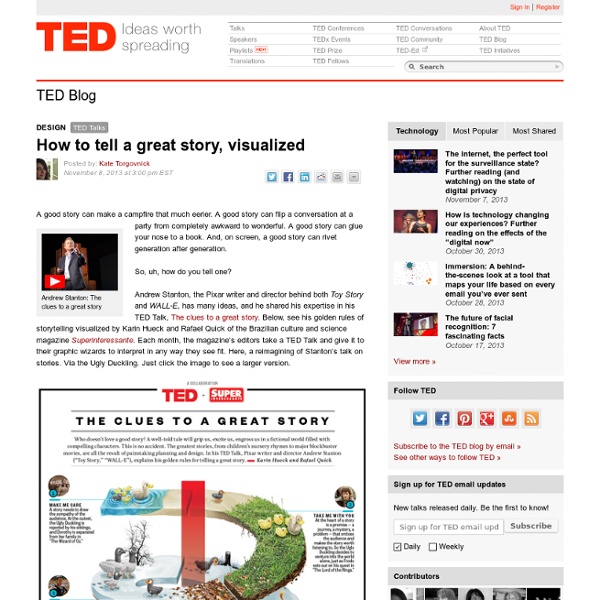 A good story can make a campfire that much eerier. A good story can flip a conversation at a party from completely awkward to wonderful. Andrew Stanton: The clues to a great storyA good story can glue your nose to a book. And, on screen, a good story can rivet generation after generation. So, uh, how do you tell one? Andrew Stanton, the Pixar writer and director behind both Toy Story and WALL-E, has many ideas, and he shared his expertise in his TED Talk, The clues to a great story. (See also the first infographic in this series, illustrating David Blaine’s experiment to hold his breath for an astonishing 17 minutes.

El lenguaje corporal | El lenguaje corporal y cómo interpretarlo 3 Powerful Ways Working Out Makes You Better at Life | Muscle For Life Few people argue the many health benefits of regular exercise. We all know it wards of all kinds of disease, and scientists have shown it’s a great way to fight depression, improve intelligence, and protect against the cognitive decline associated with aging. Many people don’t realize that the benefits of exercise go far beyond physiological and psychological improvements, however. That achieving your fitness goals can fundamentally change you as a person. That it can help you overcome your fears and weaknesses, and teach you a lot about how to succeed in all areas of your life. I believe that if you can create the body of your dreams, you have what it takes to create the life of your dreams as well. Sounds like a stretch? The First Life Lesson Working Out Teaches You: There’s No Way Around Hard Work Sometimes I wonder how much of our current population would survive a thousand years ago. You know, when you had to chase, fight, and kill to survive. The rest of life is the same. It’s bullshit.

Piensa antes de hablar With each column I write, I carefully consider the point I want to make. I draft the column, reflect on it, tweak it, and review it before I submit it to my editor, who does some of the same. Unfortunately, that type of careful thought and reflection doesn't always happen in the business environment. My sister shared a poster with me that appears throughout the high school where she teaches. Before you speak, THINK… T - is it True? Using this guideline does not preclude you from having tough conversations with your team. So, regardless of what or how you feel, T.H.I.N.K before you speak. Download free chapters from the author's book Leadership Matters for more insights and inspiration.

A Simple Lesson on How to Succeed | Muscle For Life How many times have you heard or been told that all success takes is getting into action and being persistent? We’ve all heard stories of successful people who had enough persistence to make their dreams a reality, how they would never give up, how they “burned all the bridges” and left themselves no way out but through, and so on. That’s good and all and there’s truth in those statements, but let’s be honest…they’re pretty hollow. See, the problem is, they touch on an important aspect of achieving success, but they don’t address the REAL core issue holding people back. The real issue lies behind the simple fact that the vast majority of people have been told to take more action, be persistent, “get hungry,” etc., but many don’t see their dreams through and make them happen. Why? The Mystery Behind Fear of Failure, Uncertainty, and Procrastination Many people feel kind of stuck in a rut in life and don’t know how to get out. Well, let’s do an interesting little exercise. |Potential| |Action|

5 Habits of Truly Amazing Communicators When it comes to job coaching, almost every conversation I have with a client involves the topic of communication. The motives can vary widely: Some people want to be more assertive, others need help with conflict management, and still others find it hard to speak their minds in a group setting. As I reflect on all the conversations I have, I realize that most of the time, we’re not talking about complex ideas. So, since we could all use a good reminder, here are the top five things I help my clients with when it comes to communication. 1. Do you ever catch yourself saying things like, “I love that idea, but we need to do it differently?” As soon as you say the word “but,” the other person immediately forgets the part about you loving the idea. Instead, use “and:” “I love that idea, and I think a slightly different approach would be most effective.” Hear the difference? In her book Bossypants, Tina Fey breaks down the rules of improv. 2. 3. That’s not communication. 4. 5.

Stop Comparing Yourself to Others: An Alternative to Competing with People “Why compare yourself with others? No one in the entire world can do a better job of being you than you.” ~Unknown We all do it or have done it at some point in our lives: We compare ourselves to others and gauge where we are based on what we observe them to be doing. If this was simply an observation, that would be one thing. If you have ever noticed, it doesn’t matter how many people are on your side, cheering you on. The thing about comparison is that there is never a win. And this just leaves us coming up short. But our minds do want to quantify. So, instead of training it to stop comparing altogether, why not simply redirect the comparison to a past and a present self and keep the comparison within? We are always becoming more. So, when you catch yourself comparing yourself to another, stop for a moment and re-direct the thought. What are you doing today that you couldn’t have done five, three, or even one year ago? What are your wins this year, compared to last year at this time?