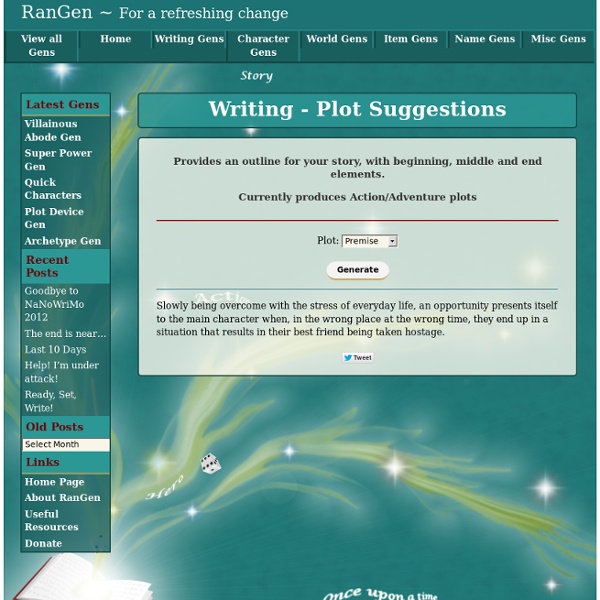 Story Structure & Plot - Novel Writing Tips Conflict and Character within Story Structure The Basic Three Act Structure The simplest building blocks of a good story are found in the Three Act Structure. Separated by Plot Points, its Act 1 (Beginning), Act 2 (Middle), and Act 3 (End) refer not to where in time in the story they lie but instead fundamental stages along the way. In the Beginning you introduce the reader to the setting, the characters and the situation (conflict) they find themselves in and their goal. How to Create Good Personalities for Your Characters Edit Article Sample Character DescriptionsCreating Personalities for Your Own Characters Edited by Secretive, Julia Maureen, Flickety, Ben Rubenstein and 19 others You're on a plane to a distant country to visit some weird old relatives you are somehow related to. Ad Steps Sample Character Descriptions Creating Personalities for Your Own Characters 1Start with a simple profile including these categories: Name, Age, Gender, and Occupation. 6Continue developing characters until your story is finished. Tips Keep the characters true to themselves. Warnings Don't copy off other characters in different, already well known books, such as Harry Potter.

How to Create a Character by Holly Lisle All Rights Reserved No matter what sort of fiction you’re writing, you’re going to have to populate your story with characters, and a lot of them, if not all of them, you’re going to have to create from scratch. Unfortunately — or maybe fortunately — there is no Betty Crocker Instant Character-In-A-Can that you can mix with water and pop into the oven for twenty minutes. Don’t start your character off with a name or a physical description. I know this doesn’t seem logical at first glance — after all, you name a baby before you get to know him very well. There are a couple of reasons. In the same way, maybe your heart has been broken twice by redheads, or the gorgeous surfer you dated briefly who stole your credit card, did drugs in the back seat of your car and got your twin sister pregnant before dumping you and vanishing from your life forever. Do start developing your character by giving him a problem, a dramatic need, a compulsion. What does the character want?

Questionnaires for Writing Character Profiles - Creative Writing Help Enter your e-mail to get the e-book for FREE. We'll also keep you informed about interesting website news. "I have searched the web and used different worksheets, but none have come close to your worksheets and descriptions of (what to do and what not to do). Both courses I have taken have with Creative Writing Now have been amazing. Each time I have learned something new. The one thing I love, you take everything apart and give examples." - Katlen Skye "As usual - I already love the course on Irresistible Fiction, rewriting a lot and improving greatly even after the first lesson. “Essentials of Fiction proved that I could indeed write and I wrote every day, much to my boyfriend's dismay (waa sniff).” - Jill Gardner "I am loving the course and the peer interaction on the blog is fantastic!!!" "I'm enjoying the weekly email course, Essentials of Poetry Writing. "Thank you for all the material in this course. "Thanks very much for this course. "I'm learning so much. "Thank you so much!!

102 Resources for Fiction Writing « Here to Create UPDATE 1/10: Dead links removed, new links added, as well as Revision and Tools and Software sections. Are you still stuck for ideas for National Novel Writing Month? Or are you working on a novel at a more leisurely pace? 10 Days of Character Building Name Generators Name Playground The Universal Mary Sue Litmus Test Priming the idea pump (A character checklist shamlessly lifted from acting) How to Create a Character Seven Common Character Types Handling a Cast of Thousands – Part I: Getting to Know Your Characters It’s Not What They Say . . . Establishing the Right Point of View: How to Avoid “Stepping Out of Character” How to Start Writing in the Third Person Web Resources for Developing Characters What are the Sixteen Master Archetypes? Character: A compilation of guidance from classical and contemporary experts on creating great dramatic characters Building Fictional Characters Fiction Writer’s Character Chart Character Building Workshop Tips for Characterization Fiction Writer’s Character Chart